European Tour 2022: AVA Group—Quality From the Inside Out

As I walked around the AVA Group’s facilities in July with Hans-Ole Vitus (CTO) and Alexander Vitus Mogensen (CEO), it became clear to me that both father and son were well equipped to answer any question I had, explain any technical process associated with the construction of Vitus Audio or Alluxity products, and walk me through the machines AVA has invested hundreds of thousands of euros in, on which they rely heavily. It was also quite obvious to me that before Alexander took over as CEO earlier this year, he had learned the business from the ground up—he knows the products and what goes into them from the inside out. 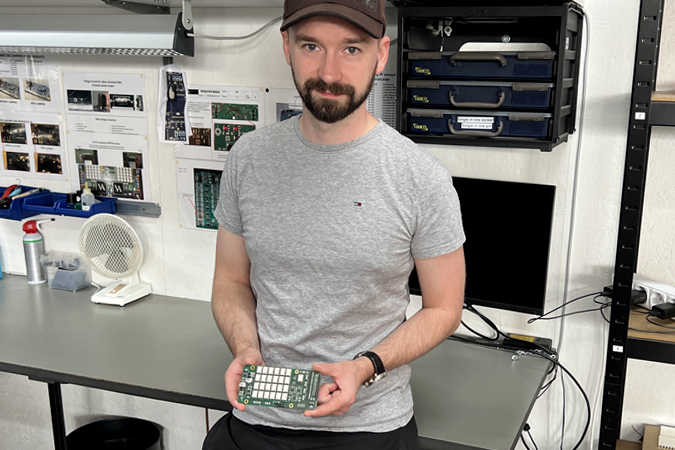 What follows is my tour of the PCB production area—literally the heart of Vitus Audio and Alluxity products. Alexander led this part of my visit. 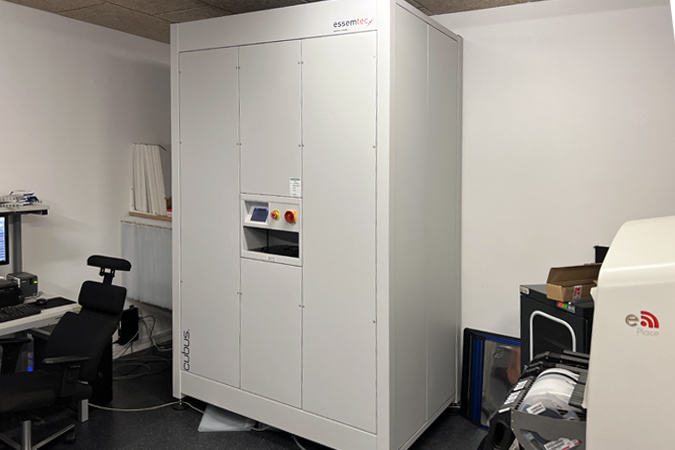 The Essemtec Cubus is dedicated to surface-mount device (SMD) storage. This is where SMDs (components that are mounted onto printed circuit boards) are kept before they become part of any product, and it’s critical to AVA’s initial quality control according to Alexander. Its job is to keep the temperature stable and prevent moisture from entering any of the devices, which are stored on reels or trays before they’re used to populate circuit boards. Temperature stability and moisture control are crucial factors for a lifetime of reliability, I was told. This €50,000 machine actually has the capability to communicate with the company’s inventory system so that employees are aware when an order needs to be placed for a particular part. 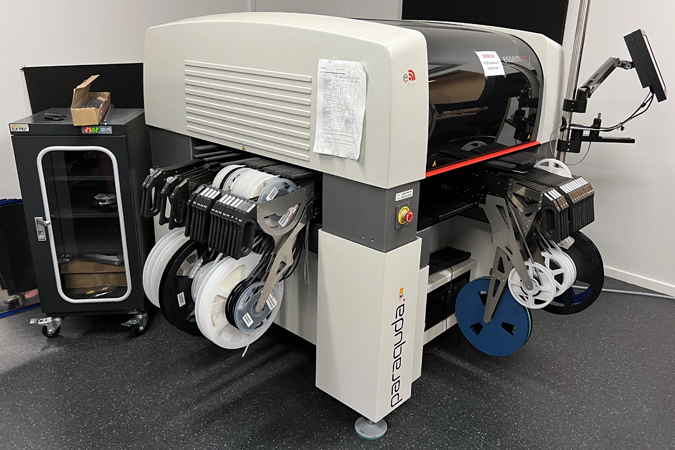 The Essemtec ParaQuda pick-and-place machine picks components up from their reels or trays, and places them onto a circuit board. Component feeders—on which the reels or trays are placed—can be installed on all four sides of the machine (and used to hold as many as 240 different 8mm component reels); this reduces setup time when they switch from manufacturing one circuit board to another. Alexander pointed out that this machine isn’t the fastest on the market, but it’s extremely precise, which is what the company is most concerned with. The cost was €270,000. 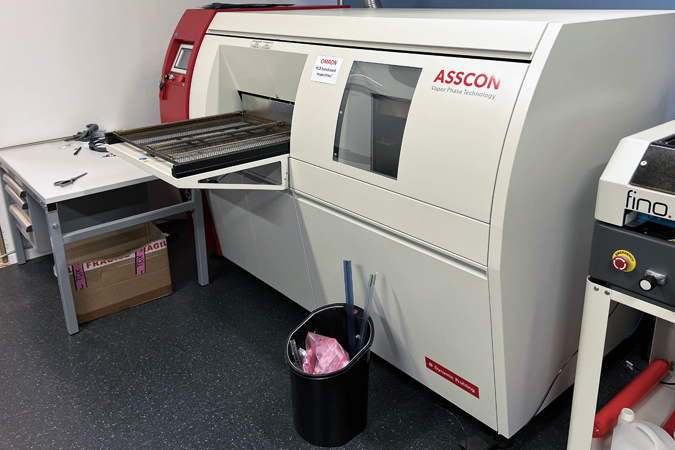 The Asscon VP-1000-64 soldering machine uses the vapor soldering method as opposed to reflow soldering. Vapor soldering is used mainly in the manufacture of medical, automotive, and aerospace products, but it’s fairly uncommon in the audio industry. According to Hans-Ole and Alexander, it’s a slower soldering process than reflow, but the results it produces are much higher quality. The main benefit of vapor soldering I’m told is avoiding what’s known as the shadow effect, in which the heat transfer on one side of a device is different than another side. The shadow effect can cause something known as tombstoning, where the differing heat transfer characteristics cause one side of a device to lift up off the board—hence the tombstone imagery. Though it hasn’t been implemented quite yet, Alexander told me that their model also contains tracking software, “so . . . we can start implementing serial numbers on the board-and-component-reel level, allowing for complete traceability from component level to solder curve on every specific board.” The Asscon VP-1000-64 was approximately €100,000. 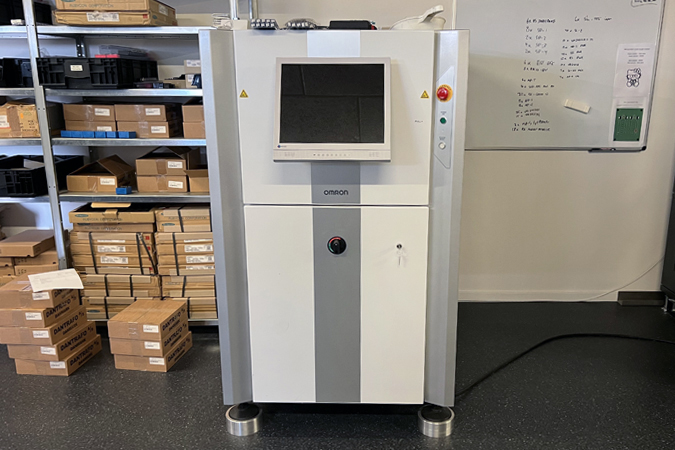 The €70,000 Omron AOI optical QC machine is used to photograph completed circuit boards, which it then analyzes for the soldering quality, correct component choice, component orientation, correct placement, correct value, and potential for short circuits. The Omron stores this data and generates a full report for each board, which is then stored on a separate server for use in the rare event of a board failure. This enables AVA Group to track down and correct problems as they happen, theoretically leading to better and better quality all the time. 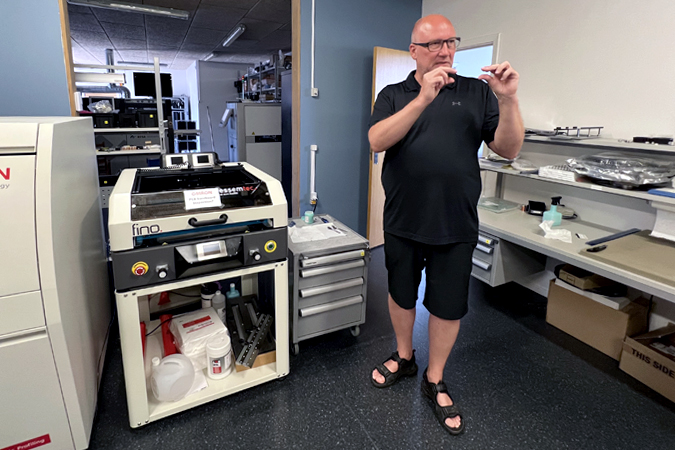 There is also the Essemtec Fino screen printer, which adds solder paste to the boards for surface-mount componentry. According to Hans-Ole, “If this is not done precisely, with the correct amount of paste, and exactly in the correct space, then everything that follows will suffer in quality.” Two built-in electronic microscopes and the included screens, together with a laser marker, help ensure this precision. This machine was about €20,000. 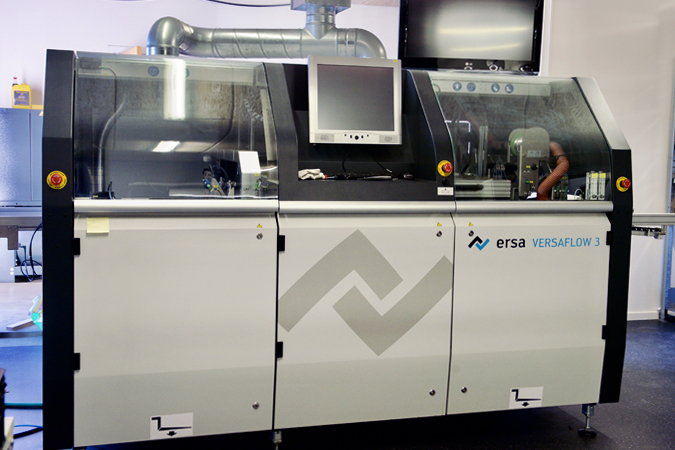 The Ersa Versaflow 3 selective soldering machine is used to solder through-hole leaded components. I’m told this machine amounts to a soldering-iron robot. It is slow compared to wave soldering, but it’s great for quality, according to Alexander. The investment here was €200,000. There’s more, too—including a Tagarno Move digital microscope and a Kaeser SX 8 Sigma dry compressor—but what’s important to know is that AVA Group has approximately €700,000 invested in PCB production. Hans-Ole and Alexander reiterated that this allows AVA Group to improve quality. “If we see issues, we can fix them ourselves in-house immediately,” stated Alexander.

After the tour of the PCB manufacturing area, we wrapped up at AVA Group and went to downtown Herning for lunch at Café Cosy. This gave me a chance to speak with Hans-Ole and Alexander about AVA Group, the new company structure, and what their plans are for the future. 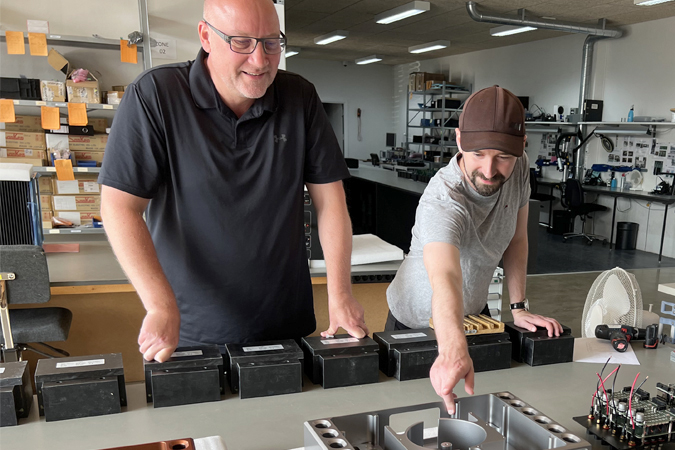 My first question to Alexander was what his goals are for the company. He said: “I want to increase sales and improve brand identity! I want people to see Vitus Audio as a high-end luxury brand—a brand someone dreams of getting and can be proud of owning.” Of course, Alexander conceded that this is easier said than done: “We need marketing as a way to establish the brand and build the perception. We need more brand awareness.” 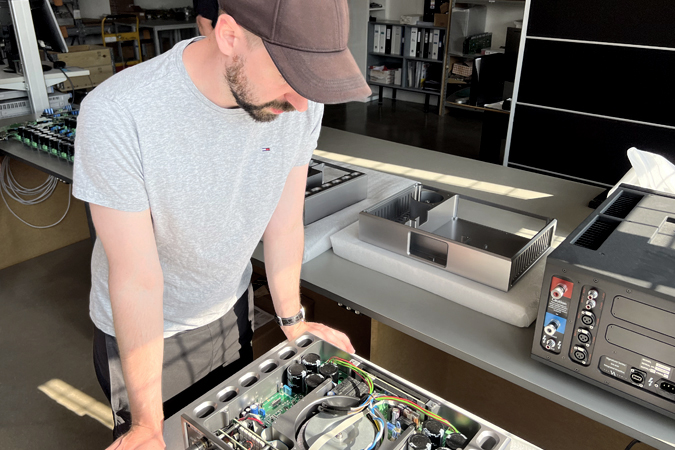 Challenges ahead? Alexander observed, “The perception of audio not being luxurious is a challenge. Within our company, we need to have an [overall] vision and make sure everyone shares that vision. This will help us to plan for and reach specific goals.” 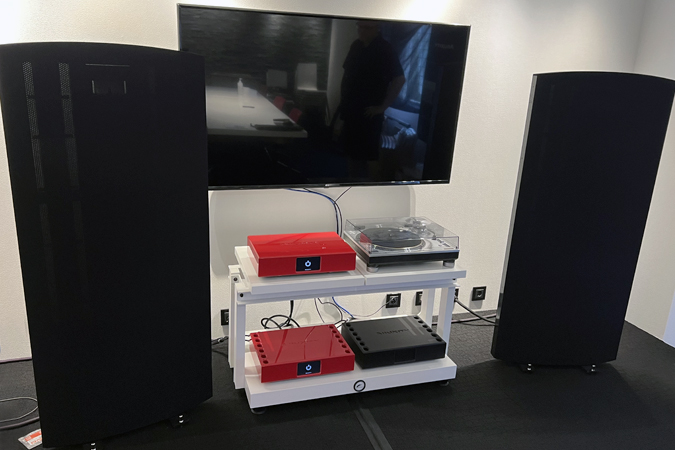 When I asked Alexander what his experience has been so far, he was extremely positive: “I’m absolutely enjoying myself! I am doing all the work I used to do plus a lot more. It’s a journey where I need to learn more about myself: leadership, product planning, setting goals for Vitus Audio, and Alluxity. After all, I have to answer not only to myself, but to the board!” 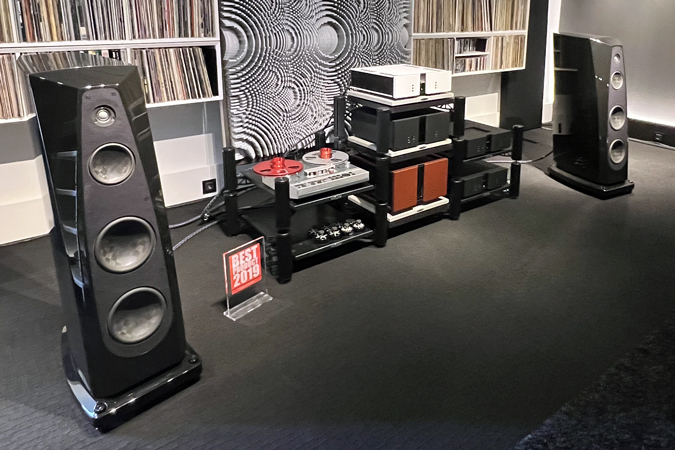 Hans-Ole, who is now chief technical officer, weighed in on his new role in research and development. Hans-Ole related one example of engineering for ultra-long life, which is clearly a passion for him: “We overdesign parts. So [to address] a 12V need, we would not use a 16V capacitor, but a 25V capacitor. This stresses the components less and improves lifespan. Another example would be a resistor that [is designed to] have 1W flowing through it, would be specified to take 4W.” According to Hans-Ole, this is one aspect of design that makes products last longer in the field. 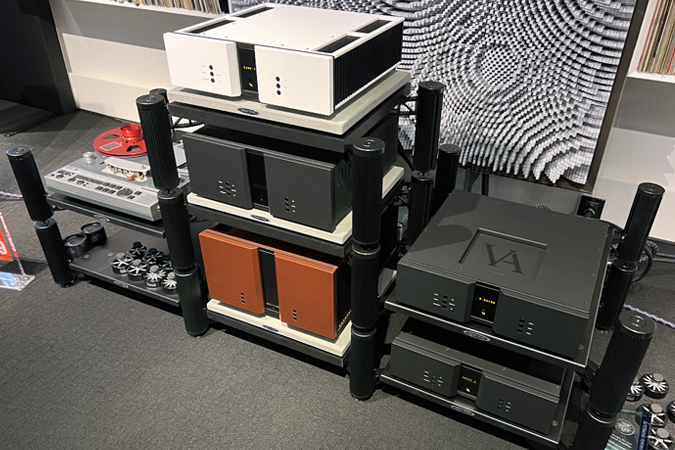 Upgradeability is also a focus for AVA Group. Hans-Ole stated: “We want our products to be cradle to grave. The average product lifespan for AVA Group products is seven to eight years.” I found out that even the oldest Vitus Audio products can be upgraded. 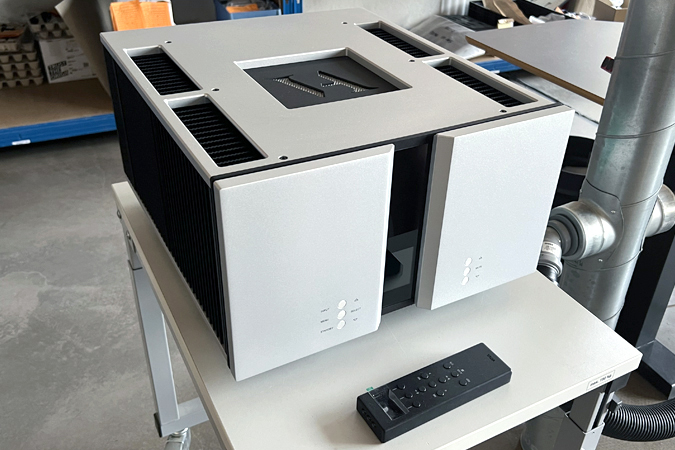 Hans-Ole is also on a quest for constant innovation and better performance. “For example, chassis design. The SIA-030’s milling helps airflow within the chassis. This helps lower the internal temperature, which improves the lifespan of the components,” he said. Hans-Ole summed up his philosophy succinctly:

Everything we’ve done has created a solid foundation in terms of technical and mechanical knowledge, and PCB and printed circuit board knowledge. All of these disciplines need to work together. For example, SMD production, if working optimally, also has to work with board layout. Many of these things are not the norm in audio. We are working at a very high level of technical difficulty in order to make the products the absolute best they can be. 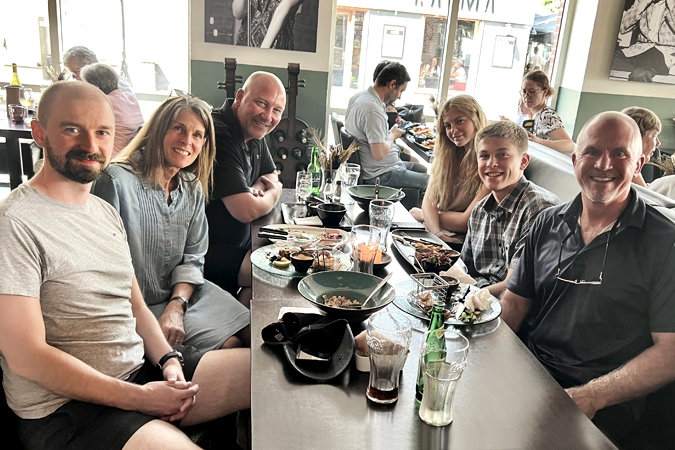 That last bit—“the absolute best they can be”—should give AVA Group customers lots to be excited about. I came away with the sense that the quality of a Vitus Audio product today far surpasses one from 15—or even ten—years ago, and that Alluxity is only going to build on its solid start as a lifestyle high-end brand. It’s hard to imagine a more thoroughly designed group of products, and they seem to be getting better every day.