Vitus Audio has been a staple of the high-end solid-state electronics realm since Hans-Ole Vitus established it, under the umbrella of AVA Group, in 1995. His son, Alexander Vitus Mogensen, started AVM-TEC—primarily a manufacturing and measurement firm—at the ripe old age of 18. Around that time, Alexander also launched Alluxity, a high-end brand that makes design-conscious—but still very high-end—electronics, including integrated amplifiers, power amplifiers, and preamplifiers. This year AVA Group and AVM-TEC merged, and they operate out of a shared building in Herning, Denmark. It took roughly an hour and a half to travel from Aarhus—our home base at the time—to Herning to tour the factory and learn more about the new AVA Group.

Herning is a small industrial town best known for textile manufacturing, and it’s about one sixth the size of Aarhus. There’s a vibrant little downtown area—mainly one bustling street—with a good selection of restaurants and coffee shops. 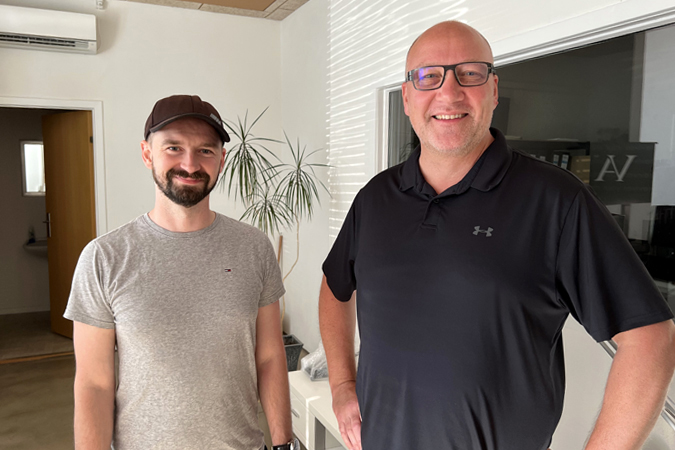 Hans-Ole Vitus picked up the four of us—me, my wife, Andrea, and our daughter and son, Abigail and Ian—from the train station midmorning on a Tuesday and took us directly to the AVA Group’s factory, located in a sprawling manufacturing area of the town. We were joined there by Alexander. For those of you who may have missed SoundStage!’s YouTube interview with Hans-Ole, 2022 marked a transition of sorts for AVA Group. Hans-Ole stepped down from his position as CEO, becoming chief technical officer, while Alexander assumed the CEO role. Lukas Birk Eriksen—a long-serving employee and now co-owner—became the COO at the same time. (Lukas was on holiday during our visit.) 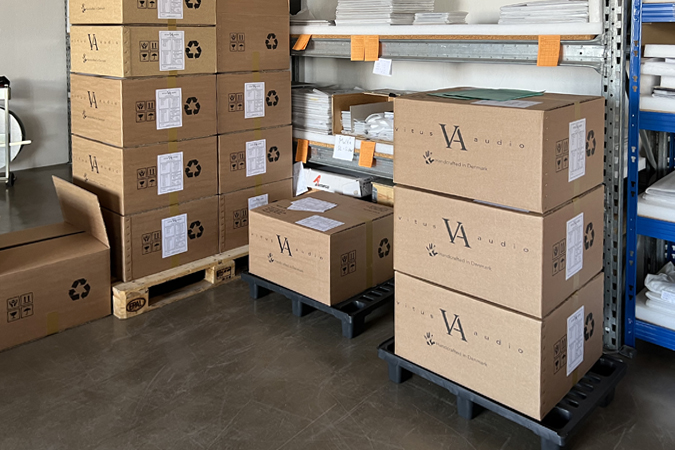 Vitus Audio and Alluxity products are shipped to 30 countries. In the current AVA Group multiverse, Vitus has 22 products, while Alluxity offers six. As I toured the AVA Group factory, I spied products from both brands in various stages of construction. To say there were a lot of electronics being built during my visit would be an understatement. 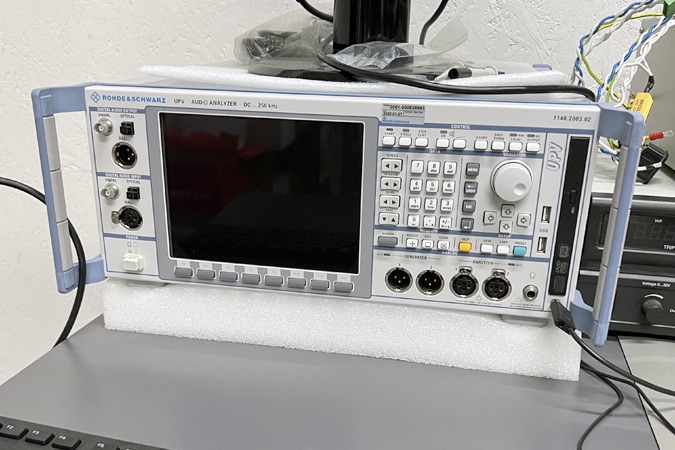 In my conversations with Hans-Ole while touring the shop, he extolled the rigor of his measurement program. I spotted numerous Rohde & Schwarz audio analyzers in locations around the factory—some were on mobile workstations, some were installed in specific areas products pass through during production. Vitus touted the resolution of the measurements he performs and his ability to drill deep into the performance of his electronics through the use of the data he derives. 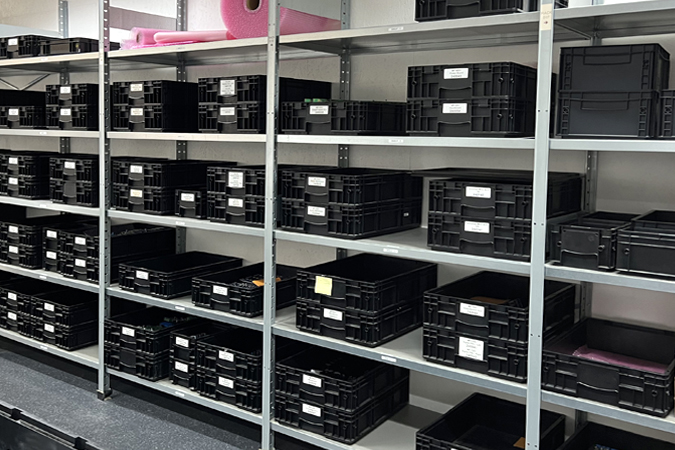 For those who don’t know, Hans-Ole worked for Texas Instruments before he began Vitus Audio. He was therefore deeply immersed in the manufacturing of semiconductors and integrated circuits, which TI produces for manufacturers in myriad industries around the world. He also told me him and his team were able to anticipate some of the supply-chain issues now plaguing the world. Hans-Ole, Lukas, and Alexander responded decisively—even though some thought their alarm was misplaced—to protect the company’s livelihood. AVA began stocking up on parts they knew they would need back in 2017, and that stockpile allowed the company to keep production up and running when others have experienced delays. Hans-Ole said AVA Group was and is better positioned than most in regards to their parts inventory—they have what they need not only to make Vitus and Alluxity components but also to manage repairs for both brands. 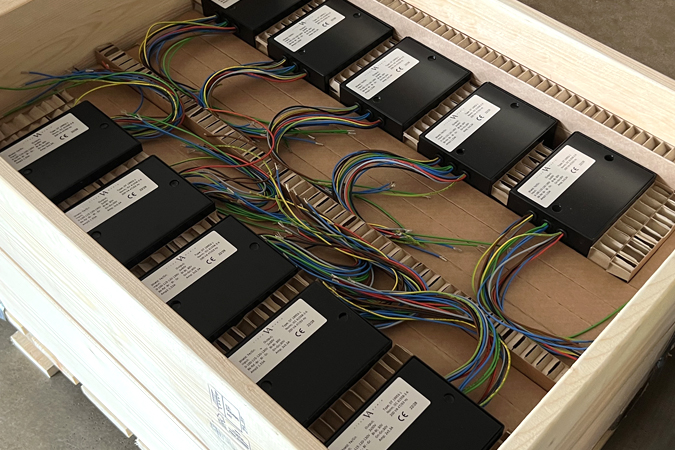 The power transformers for Vitus Audio products are manufactured nearby. Hans-Ole, Lukas, and Alexander take great pride in the quality of their power supplies and the fact that the parts are sourced locally. Above you can see a crate of transformers that will shortly find their way into Masterpiece components. 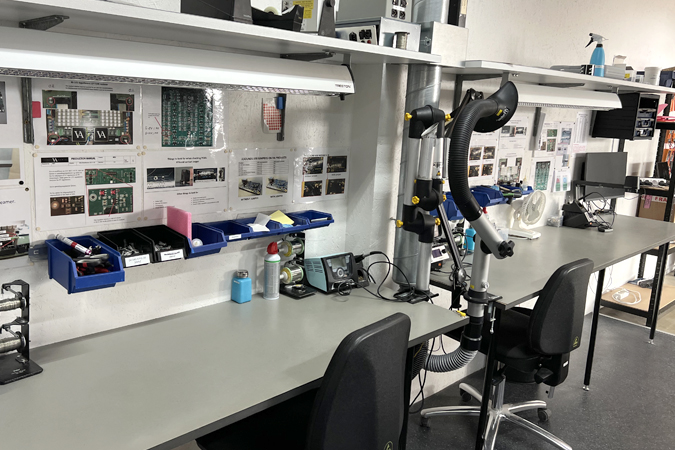 The workstation seen above is representative of many such work spaces I saw in the AVA Group’s facilities—neat and tidy. AVA’s seven, soon to be eight, employees were on summer break during my visit, but I was impressed by what I imagined must be a seamless workflow based on the logical and efficient use of space. 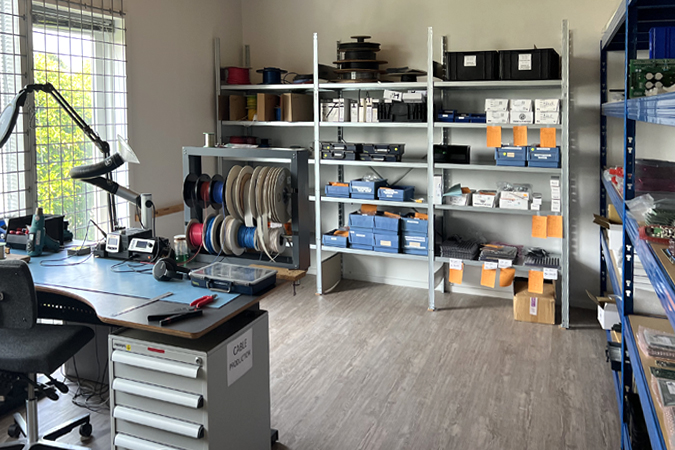 The cable manufacturing area was no less well organized. The clean, bright environment includes lots of windows and sunlight, and that’s something I’m sure the employees appreciate. 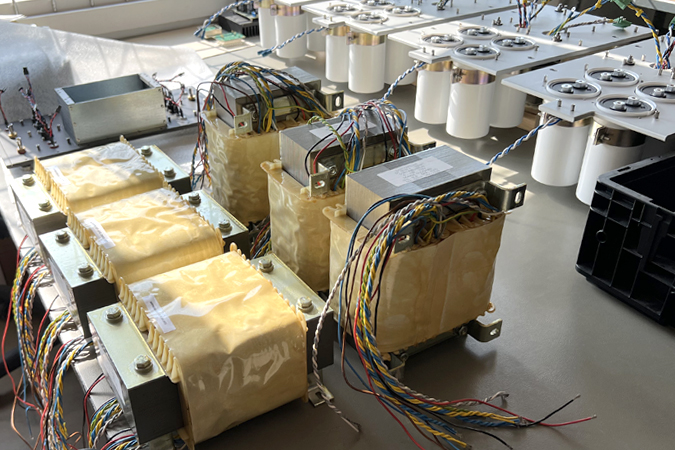 If you’ve ever seen the inside of a Vitus Audio power amplifier, you know how much space is allocated to housing the power supply. Above you can see the massive power transformers used in Vitus Audio stereo and mono amplifiers, and large capacitor banks mounted to thick aluminum plates in the background. 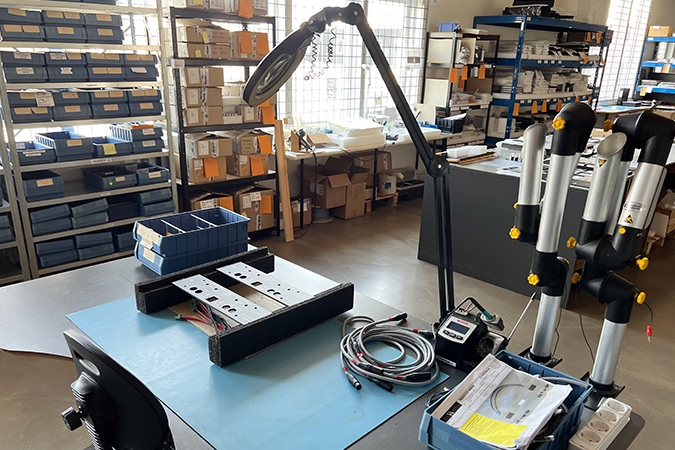 This particular workstation is used to populate the back panels of the various Vitus Audio products. Note the large adjustable overhead light for close inspection of the work being done. One theme that runs through the entire factory is clean, efficient, well-lit workspaces for employees. This no doubt leads to better quality control throughout the production process. 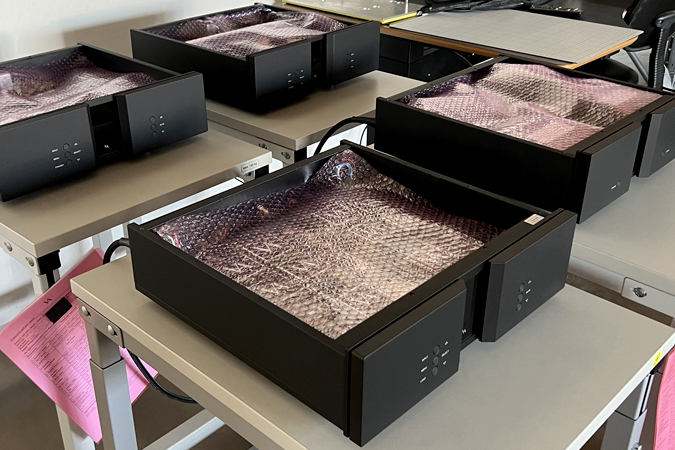 Partially assembled components are protected from internal dust with plastic sheets. As someone who values pristine internal construction—I think a high-end audio product should be close to Rolex-like in appearance—I appreciated this attention to detail. If what I witnessed is any indication, the purchaser of a Vitus Audio or Alluxity product can expect pristine construction quality through and through, including the cleanliness of the circuitry inside. 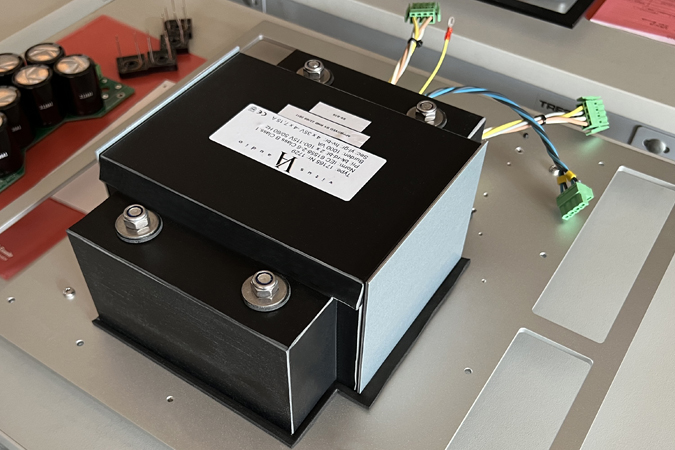 Above you can see the early stages of assembly of a Vitus Audio power amplifier and the amount of space that’s relegated to the power-supply transformer. I also noted how well finished the bottom plate is—even on the inside, a space the customer will likely never see. This was further proof that the AVA Group values quality and attention to detail throughout its manufacturing processes. 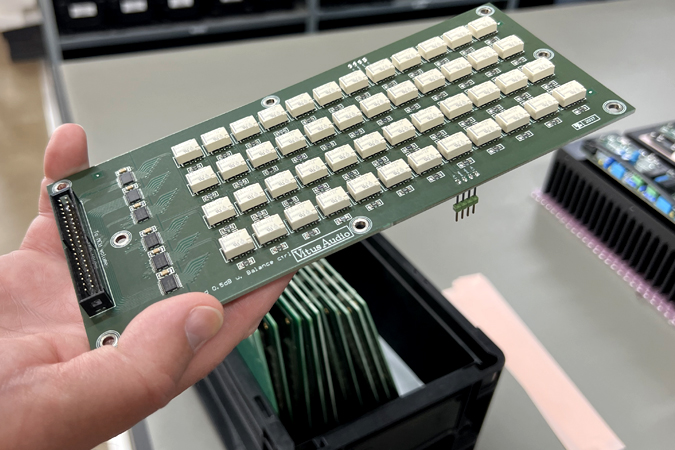 This Vitus Audio volume-control board will make its way into a finished product soon. As you’ll discover in the next part of this series on the AVA Group, designing and populating their circuit boards from the ground up is something the AVA Group takes great pride in. 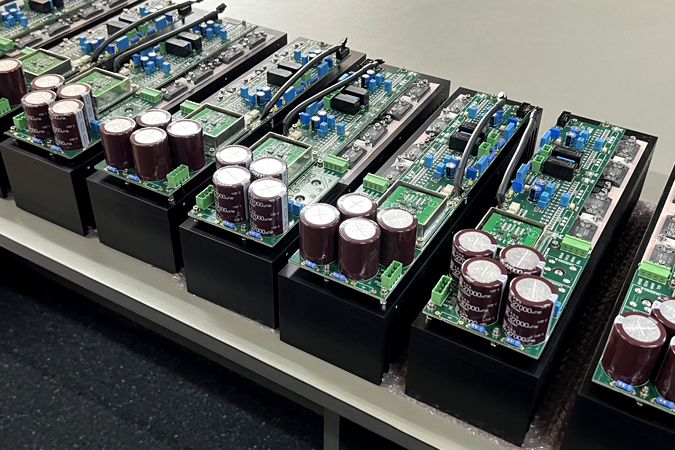 Modularity of many of the subassemblies within finished products is one aspect of construction that begins in the design stage. Hans-Ole and Alexander demonstrated for us how an entire section of a product could be easily swapped out by removing a few screws and a wiring harness. Not only does this allow for more efficient service in the field, it also enables testing and measurement of subassemblies before they’re inserted into a chassis. Hans-Ole pointed out that some of the larger amplifiers are very labor intensive to disassemble, so this pre-testing of components and subassemblies is important. If a problem is discovered late in the process—as opposed to the subassembly stage—it could set that product back a week or more, and this would mean a lot of hours wasted on disassembly and reassembly. 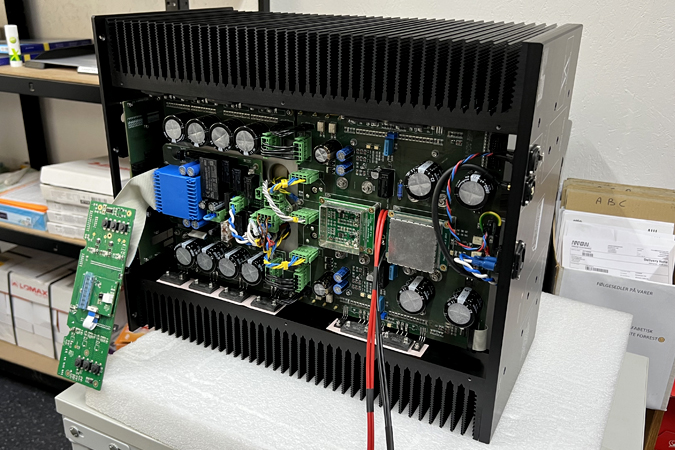 Many of the products visible in the factory were close to completion. The documentation of all the inspections that take place along the way really caught my attention. One thing that’s important to Alexander and Hans-Ole—and I was told this was largely spearheaded by Lukas—is that if a fault is discovered during the assembly process, or even after a product is delivered to its owner, the company can track the problem that led to the issue—down to the placement of one tiny component on a circuit board. In this way, AVA Group can correct a problem at its source to ensure it isn’t repeated. 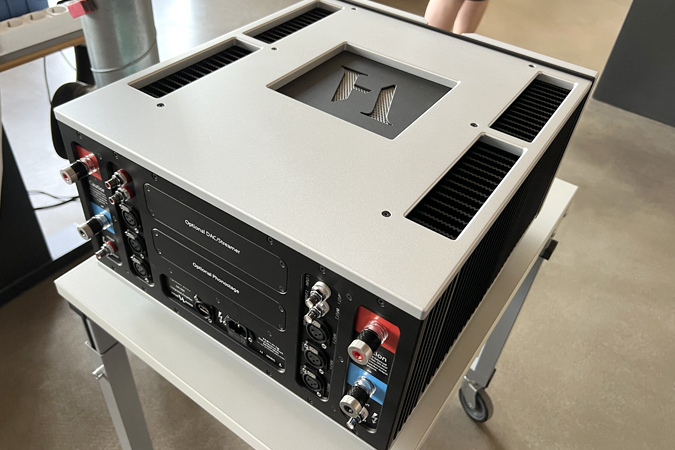 The SIA-30 is Vitus Audio’s latest product, and it’s a marvel to see. The interior is packed with a fully regulated power supply taken directly from the Masterpiece series and card-based circuit boards in the preamplifier stage that take advantage of surface-mount components. This 138-pound integrated amplifier represents a distillation of all of the knowledge AVA has gained through years of constant improvement.

AVA Group is on the rise, in my opinion. Hans-Ole Vitus told me in our YouTube interview that he’s “just warming up,” and I believe him. In the next part of this series, you’ll get to see inside the AVA Group’s circuit-board production. I think you’ll be amazed at the micro-control the company exerts over every phase of manufacture and the subsequent quality control this engenders. And you’ll also hear from Hans-Ole, Lukas, and Alexander about where they plan to take AVA Group in the future.