"The World's Best Audio System," TWBAS for short, is an exploration of the absolute best in high-end audio equipment. You'll find articles and equipment reviews by SoundStage! Network editor-in-chief Jeff Fritz as he maximizes his audio system.

Ultra Audio's site platform was changed in August 2010. For "TWBAS" articles previous to that, use this link to transfer to the archived.

Magico vs. the World: The Q3 Loudspeakers

You might not like this review. Then again, it might give you renewed hope that the high end is advancing. If you’re of a mind that what’s most important about high-end audio are the different flavors of sound it makes available, and discovering which among them best suits your palette, then this article might make you feel a little uncomfortable. However, if you’re on a quest for high fidelity -- faithfulness to the source -- because you believe that is what will get you closest to your music, then read on: The Q3 is real news.

The Q3 ($38,950 USD per pair) is California-based Magico’s follow-up to their highly lauded flagship speaker, the Q5 ($59,950/pair). A pair of Q3s comes in a single large wooden crate with a shipping weight of 576 pounds; unpacked, each speaker measures 47"H x 10.5"W x 16"D and weighs 250 pounds. The Q3’s claimed frequency response is 26Hz-50kHz, ±3dB, its nominal impedance 5 ohms, and its minimum impedance 2.8 ohms. Included are stainless-steel spikes that can be leveled and used with any floor surface, as well as matching cups to protect wood floors. A single pair of binding posts is positioned at the bottom of the rear panel. 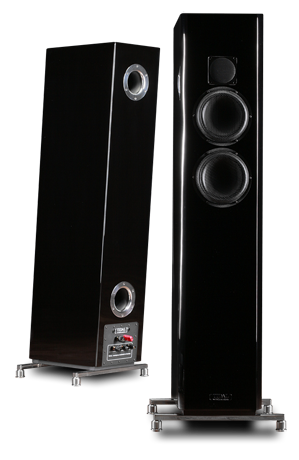 The most widely read Ultra Audio "Opinion" to date might also be the most controversial. Titled "Comparisons on Paper: B&W 803 Diamond vs. Tidal Contriva Diacera SE," the piece elicited responses that ranged from continued outrage at the prices that the high-end industry as a whole charges for products, to outright disappointment that more people don’t seem to get what the high end is all about. The point of the article was simple: On paper -- specs, driver configuration, cabinet size, etc. -- not much separated the B&W speaker from the Tidal. But the Tidal costs almost six times as much. The question was simple: What gives?

That article generated an e-mail from Tidal’s Jörn Janczak, who politely and graciously explained to me why his speaker is so much more expensive than the B&W, then offered to let me hear a pair in my home. In effect, he was game for a genuine shoot-out with the overachieving -- at least on paper -- B&W. We sat down together at the 2011 Consumer Electronics Show (see "Tidal Wave") and arranged the review.

After speaking with Janczak and perusing the Tidal models, I asked for the Piano Cera because I thought -- and he agreed -- that it might offer the best value in the Tidal line. At $23,990 USD per pair, it was still about two and half times as expensive as the B&W 803 Diamond, but it also occupies a very popular price point for high-end loudspeakers. In fact, $20k-$40k for a pair of speakers is perhaps the most hotly contested price range in all of the high end.

Although music can be discussed in terms of soundwaves occurring at specific frequencies at varying amplitudes, no one in his or her right mind would do so. That’s because the equation that describes the electrical signals that produce sound versus what we experience when we listen to music is not close to complete. In such an equation, the art -- the true intent and meaning of music -- is invariably lost.

How do electronic components designed to reproduce recordings of music figure into this equation? Some say it’s all about the numbers. Others, such as Danish audio designer Flemming Rasmussen, would likely tell you that in the creation of one of his Gryphon Audio Designs products, art holds sway over all. That’s not to say that the numbers and the nuts’n’bolts aren’t all in their proper place -- as far as I can see and hear, they are. But these details work in service to a grander vision: the art of audio design as understood by Flemming Rasmussen.

Marketing is a huge part of the audio/video industry. The SoundStage! Network is financially supported by the marketing efforts of manufacturers and resellers in the form of the online ads you see across all of our sites. Most A/V manufacturers take a multi-tiered approach to marketing: advertising online and in print; promotion through online forums, trade shows, and dealer shows; exposure on websites, blogs, and social-networking sites; etc. This marketing exists to shape the opinions of consumers and to influence their buying decisions -- no surprise there.

We all know that marketing can mislead by exaggerating and distorting the truth. But, as the old saying goes, perception is reality -- if the marketers do their jobs well. This mantra is alive and well in the A/V business, where sometimes products can be differentiated only by how they’re marketed. The information presented through such marketing campaigns exists strongly in the minds of audiophiles -- particularly those bent on spending large sums of money on loudspeakers. How does that apply to the subject of this review, PBN Audio’s Montana Sammy loudspeaker? Read on . . .

Peter B. Noerbaek and his company, PBN Audio, of which Montana Loudspeakers is a subsidiary, have never advertised with the SoundStage! Network. I’ve seen a few of Noerbaek’s print ads, but they were nothing memorable. I think it’s fair to say, at least from my experience, that PBN has a much lower profile than such speaker companies as Magico, Wilson Audio Specialties, Focal, and YG Acoustics. But PBN loudspeakers are clearly designed to compete with models from those brands, and a case in point is Noerbaek’s latest, the Montana Sammy ($29,500 USD per pair). On paper, it seemed to stack up pretty well against the competition just listed, which was enough to prompt me to ask to review the first pair. Could having a lower profile be a benefit in some way?

More and more audiophiles are migrating from CD-based audio systems to computer sources capable of higher resolutions. We now know, definitively, that greater resolution and higher fidelity are available with properly implemented computer setups than with CD players. There is no comparison between 16-bit/44.1kHz CD and files with higher sampling rates and longer word lengths, such as 24/88.2, 24/96, 24/176.4, and 24/192. If you’re stuck with CD resolution, you aren’t hearing the best that digital audio has to offer.

We also know that you can get high resolution -- i.e., a music file in any resolution greater than the CD standard of 16/44.1 -- from both Windows- and Mac-based computer systems. There are many ways to get a digital signal out to external digital-to-analog converters, but since I use a Mac, that’s what I’ll focus on here.

One of the critical elements in setting up a Mac-based music server is using third-party software to override Apple’s Core Audio, as used in concert with iTunes. Programs such as Sonic Studio’s Amarra 2.0, which I use, and Channel D’s Pure Music, facilitate listening to hi-rez files at their native sampling rates without you having to manually adjust your computer’s settings each time you switch between resolutions (for instance, from 16/44.1 to 24/96). The use of one of these programs is mandatory for the improvements in ergonomics and sound quality they make possible: Amarra definitely sounds better than iTunes alone, and I’ve heard that the same is true for Pure Music (which I haven’t yet tried).

There are two options for outputting digital signals of up to 24/192 from a Mac computer: FireWire and USB. If you have a Mac, you’ll have to choose one of these, then continue in that direction with the rest of your purchasing decisions -- I’m unaware of any DAC on the market that has hi-rez FireWire and USB inputs. Which is better? As with most things, it depends on whom you ask. Proponents of USB, specifically asynchronous USB, will tell you that their method transfers digital signals with extremely low levels of jitter. In the simplest terms, asynchronous transfer (not to be confused with asynchronous sample-rate conversion), means that the DAC controls the timing of the data sent from the computer to the DAC, thereby lessening timing errors, aka jitter. The Ayre Acoustics QB-9 DAC ($2500 USD) -- which should be capable of 24/192 by the time you read this, up from 24/96 -- has won very positive press for its sound quality, though it has just one digital input, on USB. A couple of other asynchronous USB DACs are now or will soon be available at a retailer near you.

And if you choose FireWire, the products from Weiss Engineering will surely enter the picture.

For the Power Hungry Among You: Musical Fidelity Titan Stereo Amplifier

It’s often said that big speakers can exhibit big problems for the designer. Designing a relatively competent two-way, stand-mounted speaker is a task that any designer worth his salt can easily do. But even accomplished engineers are challenged by the daunting task of designing a four-way floorstander in which the complex acoustical and electrical interactions of all those drivers work together and not against each other, and that produces bass that shakes the foundation -- not to mention designing and building the huge cabinet(s) needed to house it all. 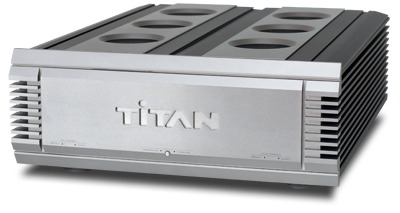 I suppose you could make a similar case for amplifiers. Some of the best amps I’ve heard, while not as low-powered as a 6W single-ended triode, have been modestly powered solid-state designs, usually with class-A output stages. I and most listeners who’ve heard them will tell you that Krell’s KSA-50S sounded better than the larger KSA-100S, for instance, and I know for sure that Coda’s System 100 was superior to the System 200 in all the ways that matter. I positively reviewed the Vitus Audio SS-101 a few years ago, and that amp, while claimed to output only 50Wpc, was in some important ways better than most of the mega-power amps I’ve had in my system.

It was with that base of experience that I approached the Musical Fidelity Titan ($30,000 USD), by far the most powerful amplifier I’ve ever had in my system. It is claimed to deliver 1000Wpc into 8 ohms, 2000Wpc into 4 ohms, and close to 4000Wpc into 2 ohms. Those are crazy power specs -- if more power means more sublime sound, I was in for a treat. But if attaining big power is tantamount to designing a huge loudspeaker, who knew what I might hear?