Just when I think I’ve bought too many Blue Note reissues on vinyl, the label releases something I like but own only on CD. Trumpeter Lee Morgan recorded The Rumproller in April 1965, and Blue Note released it in January 1966. The album followed The Sidewinder, which had become a surprise hit following its release in July 1964.

Morgan had completed two other sessions between those two albums, but Blue Note cofounder and producer Alfred Lion delayed the release of Search for the New Land until July 1966, and Tom Cat remained unissued until 1980, eight years after Morgan’s death. The Rumproller was similar in style to The Sidewinder, and Lion had wanted to take advantage of the latter’s popularity. The Rumproller didn’t do as well as The Sidewinder, which remains Blue Note’s biggest-selling release to this day.

In truth, The Rumproller lacks the indefinable spark that made The Sidewinder so special, but it’s still a very good entry in Morgan’s discography. The Rumproller has seen several reissues on vinyl since its initial release, but the last all-analog pressing was in 1977. Blue Note has now corrected that omission by reissuing it as part of its 80th Anniversary series, with Kevin Gray handling the mastering and Optimal, in Germany, pressing the 180gm vinyl. 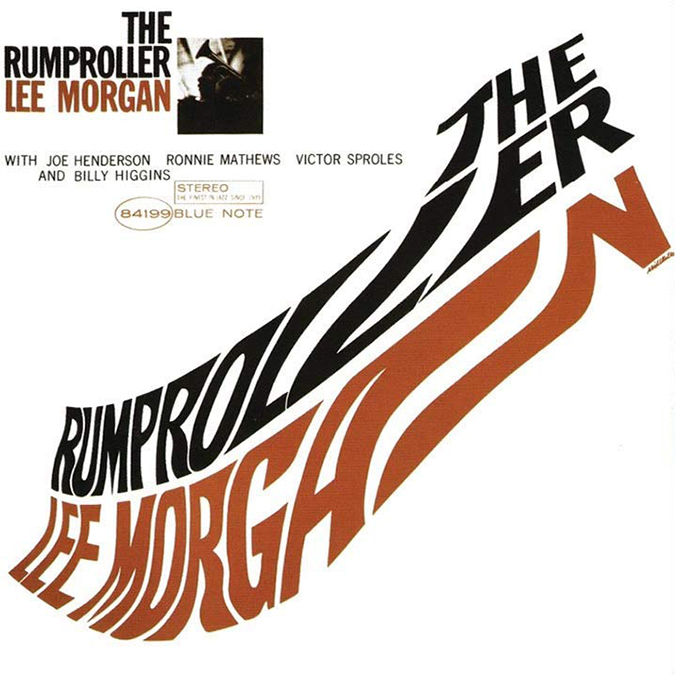 Drummer Billy Higgins opens the title track, a soul-jazz departure from composer Andrew Hill’s usual fare, with a rim shot that slams harder and longer on LP than on my 1987 CD, remastered by Ron McMaster. And when Morgan and Joe Henderson, on tenor sax, state the theme, the two instruments are easier to follow, and their aural images are more three-dimensional. Henderson’s solo has more grit, Morgan’s more brass and emphasis -- I could hear how each player uses changes in volume and phrasing to develop his statement.

Ronnie Matthews’s piano feels somewhat relegated to the background throughout The Rumproller on my CD and this new LP, but sounds more harmonically rich on vinyl. Higgins’s ride cymbal and hi-hat are crisper, too, and in “The Rumproller” the drummer’s crash cymbals, which drive this track, sound splashier. Victor Sproles’s double bass is somewhat soft in the mix on LP and CD, but easier to hear in the new reissue -- I can feel each note as it’s plucked.

Sproles’s bass in Morgan’s “Desert Moonlight” has more momentum and vigor than on CD, and Higgins’s snare pops more resolutely. On CD, his drums sound muted, and both horns sound flatter, seeming to stop at the edges of the speakers. With the new vinyl I could more easily visualize the bell of each horn, and feel the effort and emotional force in the stronger passages. On vinyl, too, the reverb on Higgins’s cross sticking in the opening of Morgan’s “Eclipso” is audible in the left of the soundstage. On CD, that effect is dulled. Sproles’s springy, flowing playing in this track has more impact on LP; on CD, they’re too distant to clearly hear.

I borrowed a copy of original recording engineer Rudy Van Gelder’s 1999 digital remastering of The Rumproller. While the 1987 CD has a more reserved sound, RVG’s remastering brings forward the piano, bass, and drums. But that makes the soundstage feel crowded, and the sound aggressively bright. Gray doesn’t increase the levels of the bass and drums in the new vinyl, but does give them and the piano more space to register. I can hear them better than in McMaster’s 1987 CD remastering, but he doesn’t overemphasize them the way Van Gelder did. 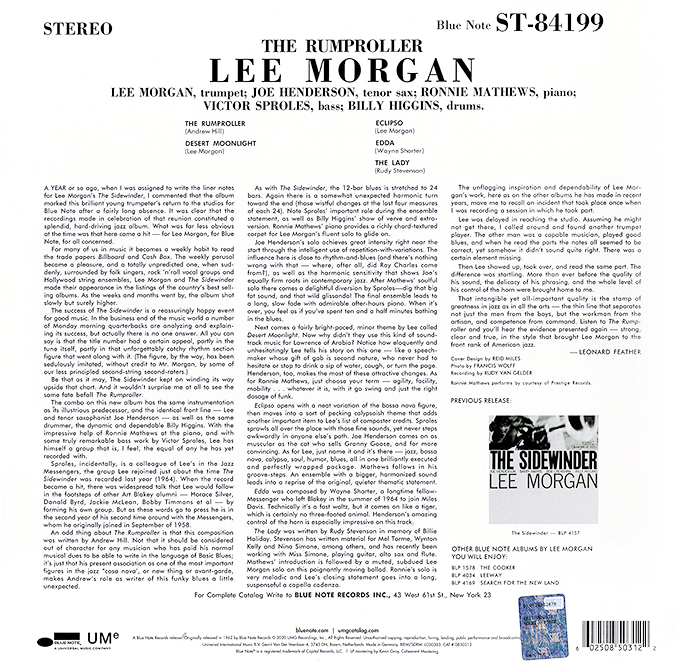 In “The Lady,” guitarist Rudy Stevenson’s lovely ballad tribute to Billie Holiday, the harshness of Van Gelder’s remastering overwhelms Morgan’s lyrical technique, the piano crowds the soundstage, and the bass is driven into distortion. McMaster’s 1987 remaster maintains a better balance of the instruments, but, as throughout the album, the bass and piano sound slightly soft. My theories? McMaster wasn’t working with a first-generation tape, and/or Van Gelder was trying to correct some problems in what was not one of his best-sounding recording sessions to begin with.

Gray has done a first-rate job of making that recording very listenable, bringing out details in the piano and bass without pushing them too far forward, and letting Higgins’s playing shine more brightly. The soundstage is deep enough to sound convincing, and Morgan and Henderson each get more room to stretch out. Of the four stars I’ve given for sound quality, at least half a star goes to Gray for giving this album as close to an audiophile sound as it’s likely to have.

As with every release in Blue Note’s 80th Anniversary series that I’ve bought so far, Optimal has done a terrific job of pressing: My copy was quiet and flat. The discs of this series come in poly-lined anti-static sleeves; earlier pressings came in paper sleeves that generated static cling -- I often had to struggle to get the record out.

The Rumproller is not essential Lee Morgan. If you’re considering choosing between it and Blue Note’s recent Tone Poet edition of Cornbread, by all means get Cornbread. But I’m willing to bet that plenty of Morgan fans were like me, and pre-ordered The Rumproller when they saw it on the list of upcoming releases in the 80th Anniversary series. They already own Cornbread -- and they’ll be glad they bought this reissue of The Rumproller.