With its seemingly effortless flow of great melodies that stay in the head, and witty lyrics that are smart without being too clever or cynical, Marshall Crenshaw’s eponymous debut album was universally praised by critics on its release, in 1982. Crenshaw and Richard Gottehrer coproduced the album, which had a clean but somewhat bright sound, with an old-style reverb that highlighted the music’s debt to Crenshaw’s influences -- Buddy Holly, early Beatles, the Brill Building -- without sounding dated.

The buzz about Marshall Crenshaw made its creator the next big thing, and production of Crenshaw’s second LP, Field Day, passed to Steve Lillywhite, known for his work with U2, Peter Gabriel, and Phil Collins, among many others. Crenshaw wanted something different for Field Day -- Lillywhite emphasized the drums, and gave the music a denser sound than on the first album. Crenshaw was happy with the results: “To me, [it] sounds like a thunderstorm in a rainforest. Real organic,” he told Intervention Records, who have released an expanded version of the album, mastered by Kevin Gray and approved by Crenshaw. 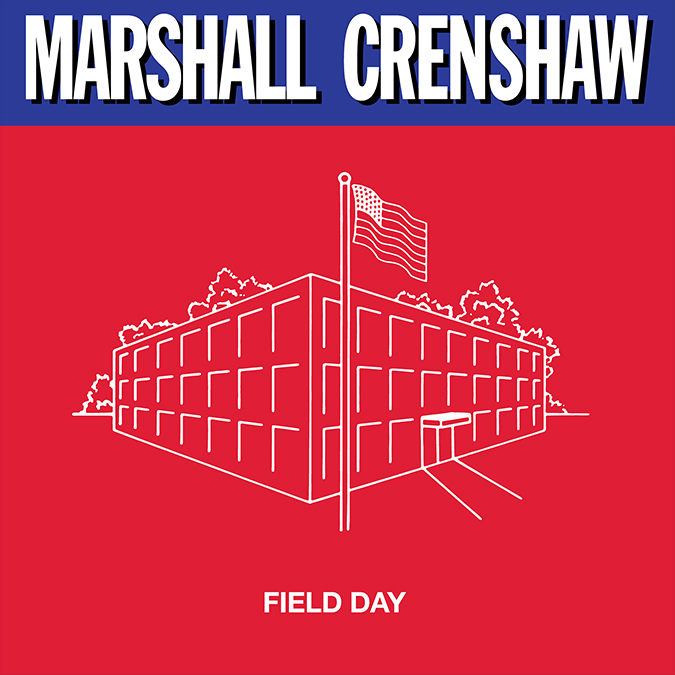 More than 30 years after Field Day’s release, Lillywhite’s production choices hold up, and Gray hasn’t radically altered the album’s sound. The drums still sound big and impressive, the guitars are still driving and forceful. Gray has given more room to the instruments, though, and put them more in support of Crenshaw’s voice. The brightly chorused guitar in “Whenever You’re On My Mind” still shines, but Crenshaw’s singing is more defined. Guitar arpeggios are easier to follow, and Chris Donato’s bass has more muscle.

Crenshaw’s formidable rhythm-guitar technique in “Our Town” is more fleshed out on this pressing, and his brother Robert’s drum accents are brought forward without being overemphasized. Throughout this new edition, the low frequencies go deeper, which gives Donato’s bass more force and lets you hear how much he contributes to these songs. The increase in lower-frequency detail also brings out more in Robert Crenshaw’s kick drum and toms, which resonate more and sound more emphatic.

Gray has also tamed some of the top-end edginess of the original, to create a new balance that lets other elements of the recording come through better. The background vocals in “One More Reason” are now behind and in support of Crenshaw, and his own singing sounds more nuanced. The guitars that begin “For Your Love” sound less glassy than in the original while retaining their power, and it’s easier to hear how effective the multitracked guitars are.

Robert Crenshaw’s kick drum in “Monday Morning Rock” thumps harder in the intro and remains strong throughout the song, instead of fading as it does on the earlier pressing. The chorused guitars in “All I Know Right Now” retain their high-end sheen, but now sound warmer and more complex, and Crenshaw’s solo is more satisfying. The harmony vocals in “What Time Is It?” come out more clearly and sound richer. And, again, the bottom end is more focused and gives the entire record a stronger foundation.

Early reviews of Field Day called out the production, and Warner Bros. ended up cutting an EP for the UK market that used radically different mixes for some of the songs. Intervention has included a 45rpm disc of the EP in this set. I don’t have an original pressing of the EP to make comparisons, but I’m happy to have this new one. There are significant differences in the mixes and mastering from the same tracks on the album proper, and they make for interesting contrasts. The EP also includes a killer live version of Doc Pomus’s “Little Sister,” with Crenshaw playing some snarling guitar. 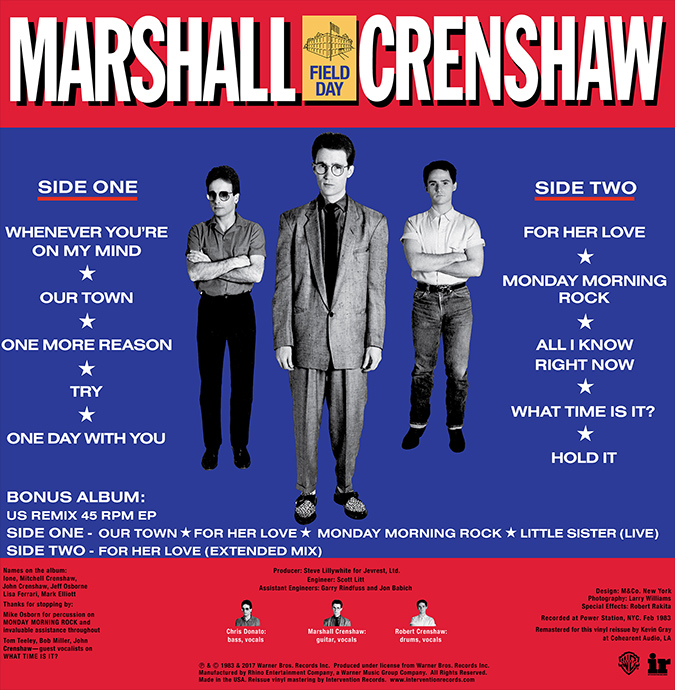 Listening again to Field Day reminded me how strong a follow-up it was to Crenshaw’s debut album, and that his work stands with that of any songwriter of the 1980s. Kevin Gray has left Steve Lillywhite’s original intentions for the music intact while revealing in the sound more depth and tonal richness. Crenshaw requested new artwork for the cover; Intervention’s Tom Vadakan has done a nice job of redesigning it, and the packaging and pressing are up to the label’s usual high standards.

Marshall Crenshaw has written and recorded some of the best songs of the last 35 years. This album, in this excellent reissue, is a prime example.