Soul of a Woman is Jones’s final album, and it’s a prime example of her versatility and of her band’s commitment to her talents. Dap-Kings guitarist Binky Griptite wrote the first track, “Matter of Time,” and his overdriven-tube-amp tone establishes the sound’s vintage feel, aided by a three-piece horn section that bathes Jones’s voice in warm tones. She sings with force and conviction, and the lyrics have one foot in the secular, one in the eternal. “It’s a matter of time before wrongs will be righted,” she sings; “It’s a matter of time before all people will be united.” You believe her.

Jones is defiant and strong in “Sail On!,” in which she puts a former lover in his place as a big, bright horn chart punches things along. Griptite’s arpeggios play against Joseph Crispiano’s chugging rhythm guitar and Homer Steinweiss’s dynamic, in-the-pocket drumming. The upbeat “Come and Be a Winner” has the soulful sophistication of Dionne Warwick’s Bacharach-David productions, trumpeter Dave Guy playing a melody line that evokes memories of those old recordings. 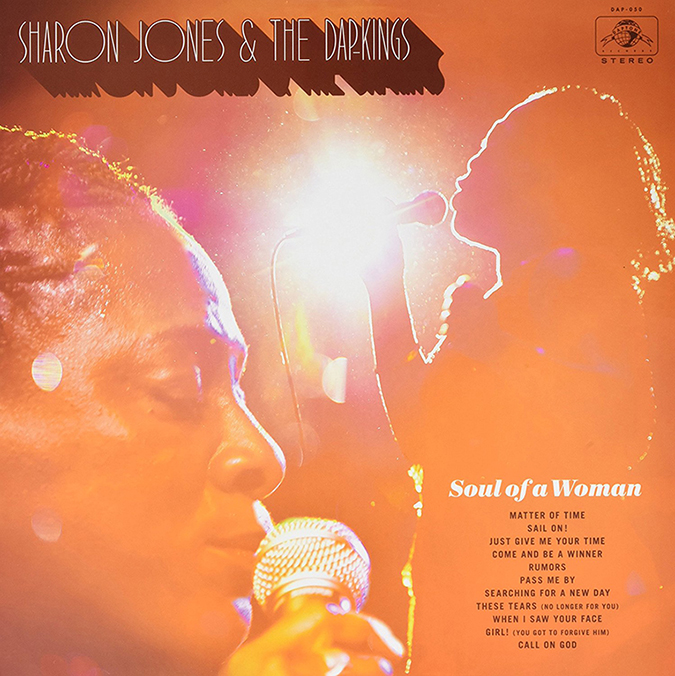 Three ballads with strings illustrate how much sincerity Jones brought to her singing, and how deeply she grasped the traditions of soul music. She sings “These Tears (No Longer for You)” with heartfelt emotion, reaches easily for the high notes in “When I Saw Your Face,” and brings believable passion to the melodramatic “Girl! (You Got to Forgive Him).”

Soul of a Woman closes with Jones’s own “Call on God,” which she recorded in 2007. Jones sang in church all her life, and Daptone held on to the recording in hopes that she would record a gospel album. The Gospel Wonders sang at her memorial service, then went into the studio to add backing vocals to the original track. Jones sings with great feeling, and a deep spirituality that brings the album to a sad but somehow hopeful close.

It’s something of a miracle that we have Soul of a Woman to enjoy. Sharon Jones was being treated for pancreatic cancer even as she recorded it, but her voice never falters or loses strength. She gives each song a sincere, powerful reading, reaffirming her position as one of soul music’s great singers. And the Dap-Kings are with her every step of the way, playing with ease and taste a variety of styles, from southern R&B to mid-’60s urban soul. 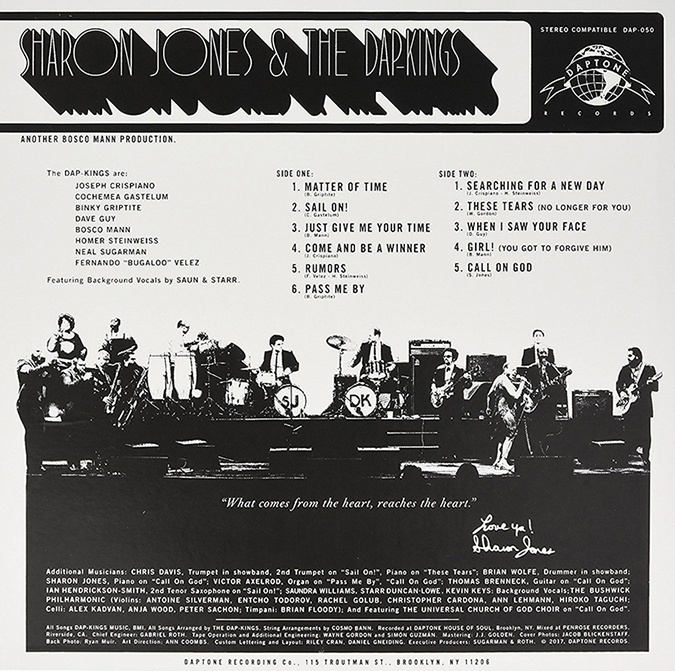 Nothing on Soul of a Woman sounds dated, and the many varieties of soul music blend into a satisfying whole. The recording has a tubed-analog warmth that shines on LP. My red-vinyl pressing was flat and quiet, and the sound was spacious and well focused. Every shivering note from the electric guitars came through, along with the textures of the horns and the beauty of the excellent backing vocals.

Soul of a Woman lasts 36 minutes -- we might have wished for more from Sharon Jones, but that would have been the case had this album been twice as long. It’s probably the last we’ll hear from this extraordinary singer. Savor every moment.