For this first vinyl release of Summer in the City, for Intervention Records, Cohearent Audio’s Kevin Gray remastered from new high-resolution files. According to the notes on Intervention’s website, “Sony’s archivists and Battery Studios’ Mike Piacentini compiled new high-res digital master files from the original DATs with the final mixes, and [Intervention] consulted with [the original recording engineers] on key aspects of the recording to ensure the best possible source files were used.” 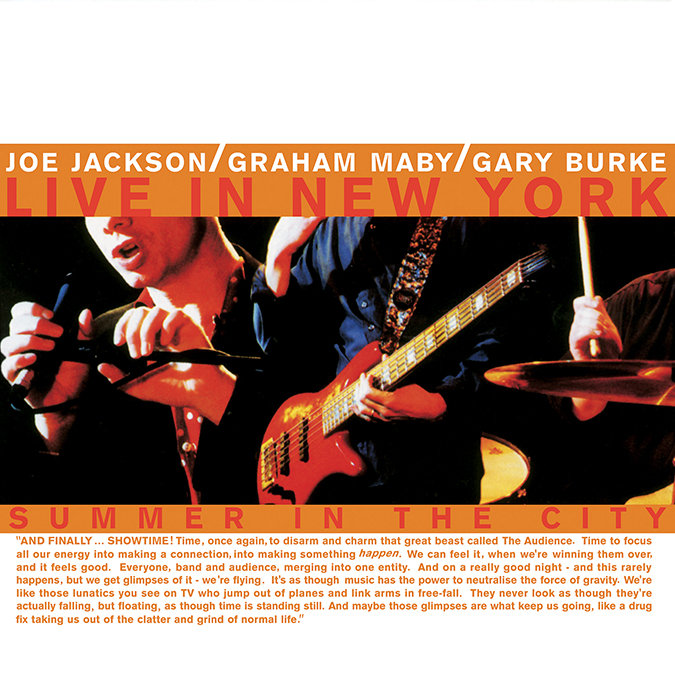 The resulting set of two LPs, pressed at RTI, pulled me in a little closer to Jackson’s music than does the already very-good-sounding CD. In the opening moments of side 1, I felt as if I were in the middle of the small club audience greeting Jackson as he takes the stage with electric bassist Graham Maby and drummer Gary Burke. With the CD, I feel I’m sitting farther back.

The vinyl also brings the musicians farther out into my listening room. Jackson’s piano in that first cut, a cover of the Lovin’ Spoonful’s “Summer in the City,” sounded larger and resonated more powerfully. Maby’s bass, which sounds terrific on the CD, is sharper toned in LP. Burke is especially well served on this reissue: Gray has moved him out of the CD’s slight haze, and it’s easier for me to hear the attack and tone of each of his drums, as well as the sizzle of his cymbals. 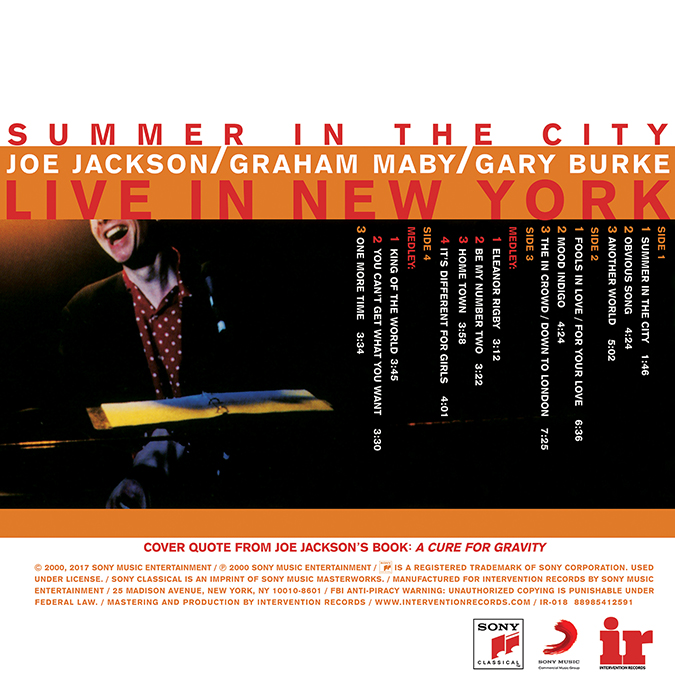 Arranged for piano trio, the Jackson tunes included here are as interesting and musically compelling as in their original arrangements for larger ensembles. Jackson’s reworkings show how well his music holds up, and how strongly it responds to reinterpretation. His takes on songs by others, such as the Yardbirds’ “For Your Love,” give some insight into how much he’s learned from them, and how skilled he is at adapting those lessons. Jackson’s piano skills come to the fore in “Obvious Song,” which first appeared on Laughter & Lust (1991) -- on vinyl, his instrument has more energy and shimmer than on CD. Maby’s bass punches harder and Burke’s drums sound larger, with more slam from the kickdrum.

Burke’s subtle hi-hat technique and the liveliness of his drumming in Jackson’s “Another World” are more cleanly presented on vinyl, and Jackson’s comping more fully supports Maby’s bass solo, and has greater harmonic depth. Jackson combines Billy Page’s “The ‘In’ Crowd,” made famous by Ramsey Lewis, with his own “Down to London,” and Burke’s cross-sticking on snare rings out more sharply. Again, the tonal characteristics of Jackson’s piano come through a bit more clearly than on CD, making his pianistic skills that much easier to appreciate.

Ted Jansen’s mastering of the CD of Summer in the City was very good, and its sound is one of my favorites of Joe Jackson’s albums. Kevin Gray hasn’t radically altered that sound, but he’s nudged things forward to give the music a deeper, wider soundstage that brings it out into the room and lets subtle details bloom. The texture and timbre of Jackson’s voice, which by 2000 had grown supple and expressive, is easier to hear. Small aspects of each instrument’s sound are now more apparent, which makes it easier to feel the close communication among the three.

Kevin Gray has made an already good-sounding recording sound even better -- more immediate and more realistic. I put on side 3 and was sitting in a club in New York, entranced as Jackson played and sang his “Be My Number Two,” “Home Town,” “It’s Different for Girls,” and the Beatles’ “Eleanor Rigby” -- and I hadn’t left my living room. An essential purchase for Joe Jackson fans.