The Oscar Peterson Trio: "We Get Requests" 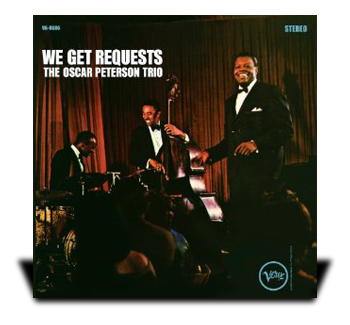 This 1964 set can polarize jazz lovers. Many find it the consummate recording of this trio, which had been together five years when it was taped. Others think the repertory is trivial. Peterson chose for this set such popular favorites as "Quiet Night of Quiet Stars (Corcovado)," "People," "The Girl from Ipanema," "The Days of Wine and Roses," and "My One and Only Love." Balancing these chestnuts are some slightly less familiar standards: "Have You Met Miss Jones?," "D & E," "You Look Good to Me," and "Time and Again." Here's the formula: Peterson usually makes a clear statement of the tune up front, then goes off on one or more of his incredible variations, manipulations that give him a chance to show off his fleet, refined, and graceful fingerwork. Bassist Ray Brown and drummer Ed Thigpen are virtuosos in their own rights, but also know how to fit in as part of the ensemble. To say that the three are tightly knit is to understate the obvious.

It's generally agreed that We Get Requests is one of the best-recorded jazz-trio discs in the catalog. Every time there's been a new recording format or refinement of an existing format, this album has been remastered and reissued. This SACD/CD was remastered by George Marino at Sterling Sound, who has written that it was the most difficult Verve title he's ever dealt with. The two-track masters weren't usable, but three-track masters in good shape were discovered. The result: This latest edition of We Get Requests is a genuine multichannel SACD with three discrete front channels.

Still, there's a problem. The three-track master tape for tracks 1-5, possibly never remixed, consists of three bare channels, one per instrument: drums left, bass right, piano center. There's little if any bleedthrough between channels, which gives the instruments a somewhat eerie feeling of isolation from each other. On the plus side, the tracks are clean and free of blemish, allowing every nuance of each musician's playing to be clearly heard. And beginning with track 6, "You Look Good to Me," everything changes: The bass and drums switch left and right positions, and now there's plenty of bleedthrough to the centered piano, and we get more of what the first five tracks are somewhat lacking in: warmth. I've a feeling that the different positioning might have been nurtured by the vinyl format. On the original LP edition, tracks 1-5 were side 1, tracks 6-10 side 2. But on CD, this is something that even the most casual listener will notice. Analogue Productions takes great care in producing great reissues; they should also provide notes that provide more of the history of the recording, and why it might sound different from track to track.

Whatever the players' positions, even the CD stereo tracks on this disc sound tremendously better than on the original Verve CD, the only other version I had on hand for comparison. Listen to the whisper of Thigpen's delicately brushed cymbals, or Ray Brown's precise attacks on his double bass. All sorts of subtle communication was going on in this trio, and this Analogue Productions release lets you hear it clearly. For instance, when you hear a mysterious sound in the left channel of track 6, it's not a vacuum tube frying, but Brown mumbling along with his playing. The sound is so clean that you can hear absolutely everything -- if your system has a transparent midrange, you'll love it.