English musician Richard Dawson has made recordings under his own name since 2005, but also under the pseudonym Eyeballs and in collaborations with other musicians. His primary influence is English folk music, but his recordings are highly experimental and veer into prog rock. His music has a willful eccentricity that sets him apart from the mainstream and makes him worth hearing, but it requires some time to absorb and appreciate. 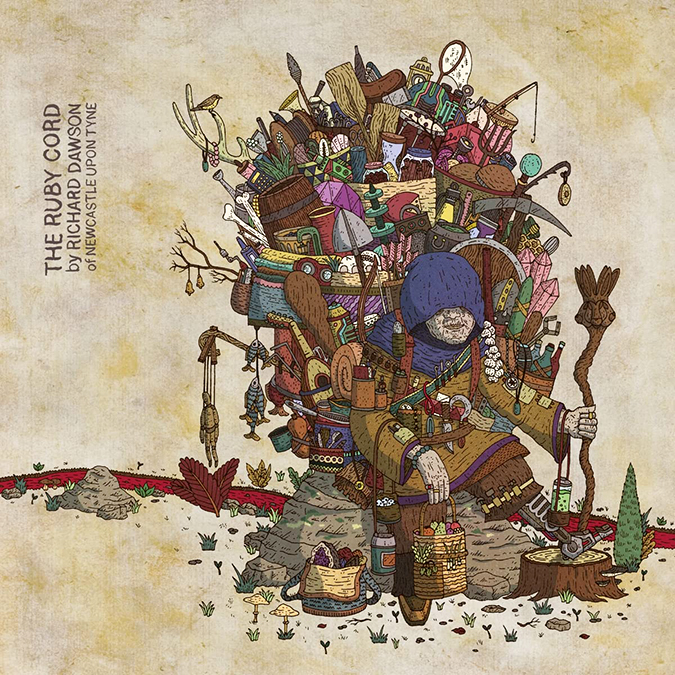 A case in point is “The Hermit,” the first song on The Ruby Cord, Dawson’s newest album. The 41-minute track—split over two sides on LP—ambles along for nearly 12 minutes before Dawson begins to sing. It commences with what sounds like someone shifting in a chair, then bumping into a guitar and causing the strings to vibrate. Drummer Andrew Cheetham plays brushes over the snare drum and closes the hi-hat cymbals, and Dawson joins him on guitar and bass. Rhodri Davies on pedal harp and Angharad Davies on violin fill out the arrangement. Instruments and sounds intertwine to create music that is alien and distant—something from another culture and another time.

When Dawson starts to sing, the composition takes shape. The melody is odd but easy enough to follow. The lyrics require some guidance:

If, like me, you don’t know what “chiffchaff” and “clarts” are, you can turn to Genius.com, a music site that has a lot of news and other information, including song lyrics, for many releases. The lyric pages for “The Hermit”—and other songs on The Ruby Cord—link to definitions of obscure and dialectical words, literary references, historical facts, and points of geography that Dawson uses in the piece. The music shifts and transforms as the track progresses, and at some point deep into the song the lyrics begin to suggest that the narrative takes place in the future, not the past.

The Ruby Cord completes a trilogy Dawson began in 2017 with Peasant, set in the Middle Ages, and continued in 2019 with 2020, which looked at the present. The Ruby Cord is Dawson’s vision of the future, and it feels both pastoral and technologically dark. “The Hermit” contains sections where Dawson sings accompanied by himself and other musicians, then moves to a cappella passages and acoustic instrumental movements that range from easygoing to aggressive, melodic to dissonant, reassuring to confusing. The track is grandiose, ambitious, hard to nail down, and, depending on your reaction to it, a brave or foolish way to begin an album.

“Thicker than Water” begins the second portion of the album, which is composed of songs that are more straightforward in structure. The tune is in the English folk-rock style, with an electric guitar and drums mingling with the harp and other acoustic instruments. Dawson’s high-pitched voice presents a post-apocalyptic vision that includes the narrator finding his dead parents and disconnecting them from a high-tech device (“With my bare fists, I smash the screens / Pull their drips out, and fling away their goggles”).

Other songs are more firmly in the prog-rock camp. Electric guitars and electronics create a dense, slightly chaotic opening on the “The Fool.” Dawson sings over the clamor but the song moves into a calmer section, with Dawson singing over acoustic instruments. The middle section of the song shifts back to noise and tension, then returns to calm. The song comes to a dramatic conclusion with Dawson singing of the virtues of love.

Dawson often likes to shift gears quickly in a song, so “The Tip of an Arrow” begins as acoustic folk rock, with effects darting in and out and moods shifting, then veers into hard rock. Things calm down again for Rhodri Davies’s solo feature on pedal harp, with Dawson’s bass lines giving the instrumental section a more defined rhythmic structure. Heavy rock returns for the closing minutes of the song before a brief coda brings us back to the song’s acoustic opening chords. The ten-minute track tells the story of a man and his daughter who survive in defiance of new technology by using old skills such as arrow-making.

“Thicker than Water” and “The Fool” are notable for their relative brevity—5:35 and 5:46, respectively. Most of the other tales on The Ruby Cord take place over lengthy musical excursions that create the moods and backgrounds for Dawson’s narrative threads. “Horse and Rider” is composed of three musical sections and maintains the rustic feel that is established in the song’s opening moments. A grand and rich vocal and instrumental arrangement closes the album on a hopeful note. 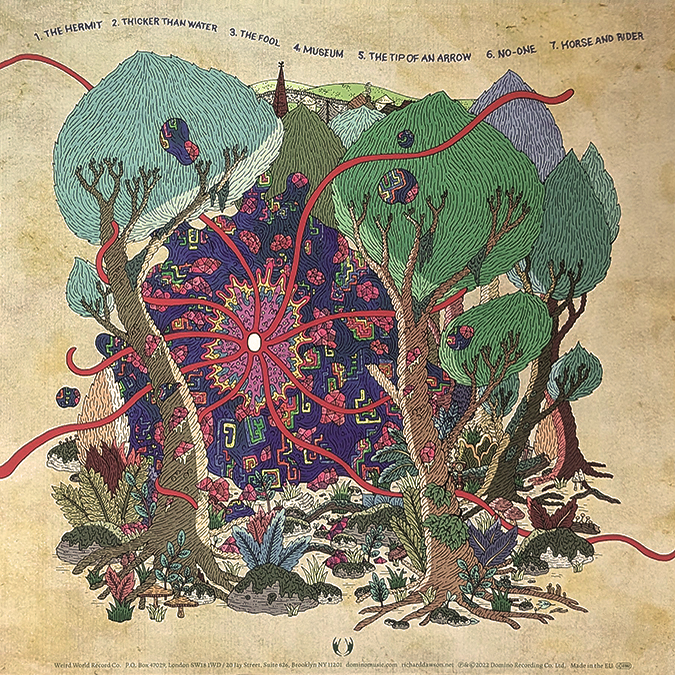 I couldn’t see any indication of where my vinyl copy of The Ruby Cord was pressed, although Optimal Media in Germany has pressed other Dawson LPs. Both LPs in my copy were flat, quiet, and well centered. The LP came with a digital download, with a choice of FLAC, WAV, or MP3 formats. I chose the 16-bit/44.1kHz FLAC download.

When I compared them, the vinyl gave a slightly more spacious presentation of the music, while the FLAC playback delivered a more pronounced bottom end. Sam Grant engineered and mixed the recording, and I found that the passages that mixed distorted guitars and heavy bass with acoustic instruments benefited from the more spacious LP sound, which allowed for better separation of instruments.

Dawson’s music is unlike any other musician’s I can think of, now or in rock music’s past. His high-pitched voice sometimes reminds me of Robert Wyatt’s. The great drummer and singer from Soft Machine went on to a notable, varied, and experimental solo career. Still, it won’t do to compare the two musicians, except to say that in 17 years of recording Dawson has shown a similar creative restlessness and courage.

You can be courageous yourself and jump right in with “The Hermit,” or move ahead to “Thicker than Water” and ease gently into The Ruby Cord. Either way, you’ll find that the album will whet your appetite and leave you wanting to explore Richard Dawson’s other recordings.