Jazz pianist Duke Pearson spent most of his recording career with Blue Note Records, where he also arranged and produced for other artists. One of his later recordings for the label was a Christmas album, Merry Ole Soul. He recorded the album’s nine well-known seasonal songs in February and August 1969, with Bob Cranshaw on bass, Mickey Roker on drums, and, on three tracks, Airto Moreira on percussion. Blue Note released the album later that year.

The re-release of Merry Ole Soul kicks off the third Blue Note Classic Vinyl series. The label launched the first reissue series two years ago, on its 80th anniversary. Kevin Gray masters the releases, using analog tapes if available, and the LPs are pressed at Optimal Media in Germany. The covers are reproductions of the originals, on standard-weight cardboard. Blue Note reissued Merry Ole Soul on vinyl in 1975, but never released it in the US on CD. Blue Note in Japan has released the album several times on CD, including the 2014 reissue I used as a comparison with this new vinyl pressing. 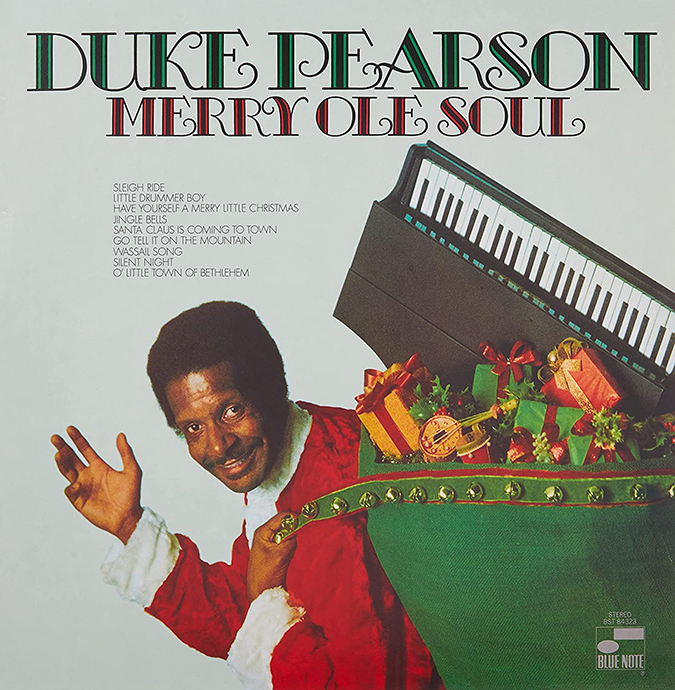 When I switched from CD playback of Merry Ole Soul to the new vinyl reissue, I heard the music taking place on a wider, deeper soundstage that gave the instruments more space to register. Cymbals and high notes on the piano were brighter on the CD, but more tonally natural on the LP. Pearson plays the melody on “Sleigh Ride” on celeste, and it sounded somewhat piercing on the CD. Each note of the celeste sounded out clearly on the LP and hung pleasingly in the air.

Pearson states the melodic theme on “Little Drummer Boy,” but Roker gets most of the solo time, with Cranshaw answering him. On CD, Roker’s drums lacked clear separation and nuance, and the notes on Cranshaw’s bass smeared together. On this reissue, all the instruments were grander in scale and it was easier for me to hear how skillfully Roker used dynamics, and how he used his cymbals, high hat, and snare to develop his statement.

Moreira adds percussion to a bossa nova interpretation of “Jingle Bells” that revitalizes the song, and his wood block and cowbell were much more vibrant and distinct on this reissue. His bongo playing adds considerably to Pearson’s rousing take on “Santa Claus Is Coming to Town” on my Japanese CD. But when I played the LP version of the song, the drums moved farther over to the left and back a little, the bass moved back in the right channel, and I heard the tones and openness of the bongo drums much more clearly. Moreira’s bell-like percussion on “Wassail Song” adds to the tune’s yuletide spirit, and it came out farther into the room on the vinyl. 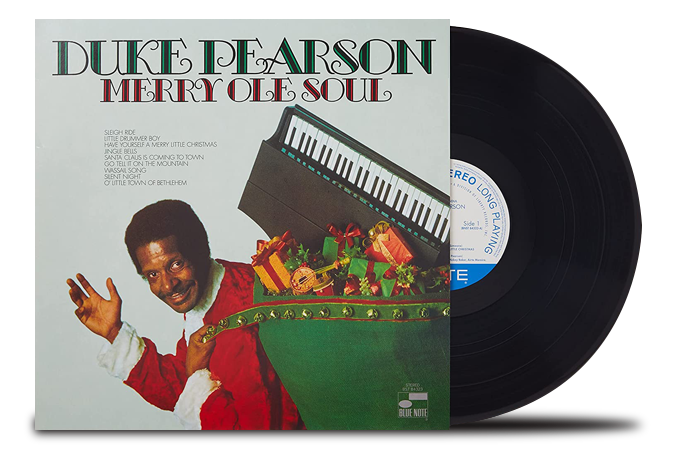 The trio’s reading of “Have Yourself a Merry Little Christmas” felt constricted on CD, where the players were in danger of crowding each other out. The music unfurled more easily on the vinyl release, where Gray’s remastering has set off each instrument in a way that lets the listener appreciate the interaction among the players. Pearson’s piano was more resonant and open throughout the LP, and more realistic and harmonically complex. The remastered LP presented a much better picture of the notes that compose the chords and the overtones of individual notes in the solos.

Gray has also given Cranshaw’s bass more low-end rumble and warmth. It was also easier to hear the acoustic character of the bass and visualize the size of the instrument. Roker’s drums are presented on a wider scale, and I could hear subtle details of his style more clearly. His accents on “Sleigh Ride,” and his use of mallets on the drum came through more solidly.

Gray used the original analog tapes as the source for Merry Ole Soul. My copy was well pressed—quiet and flat. I don’t have an original copy of the LP for comparison, but I found the cover art for this pressing to be nicely focused and colorful. Blue Note switched to static-free inner sleeves for the second Classic Vinyl series, and wisely chose to stick with them for this release. 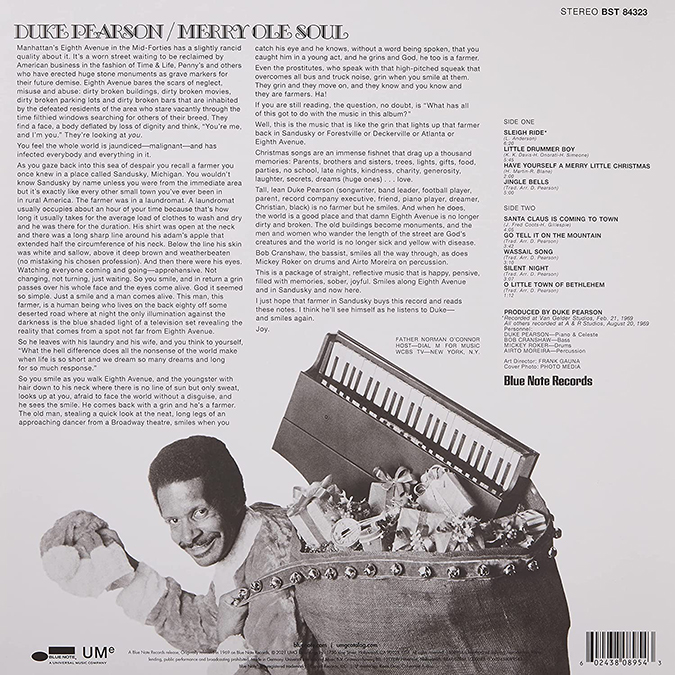 The fact that I already have a Japanese CD of Merry Ole Soul probably shows I have a weakness for seasonal music. One of the first CDs I bought was Vince Guaraldi’s A Charlie Brown Christmas, and every Christmas my wife buys holiday CDs for me. Blue Note’s Merry Ole Soul vinyl reissue is a welcome addition to my collection, and it’s sonically pleasing, as well. If Duke Pearson’s gospel rendition of “Silent Night” doesn’t give you a bit of the holiday spirit, nothing will.