Study in Brown was the third outing by the quintet, which also included bassist George Morrow and tenor sax player Harold Land. The fifth member was pianist Richie Powell, who died in the same car crash as Brown. EmArcy Records first released the album in 1955, and although it has remained in print over the years, this new LP reissue by Verve Records/Universal Music as part of the Acoustic Sounds Series is its first appearance on vinyl in the United States for some time.

I own a copy of what appears to be the sole CD release of the album in the US, released in the mid-1980s and still available. The CD booklet and insert give no information about who mastered this mono session for what was then a new format. Ryan K. Smith was the remastering engineer for the new all-analog vinyl pressing of Study in Brown, which was produced by Chad Kassem of Acoustic Sounds. 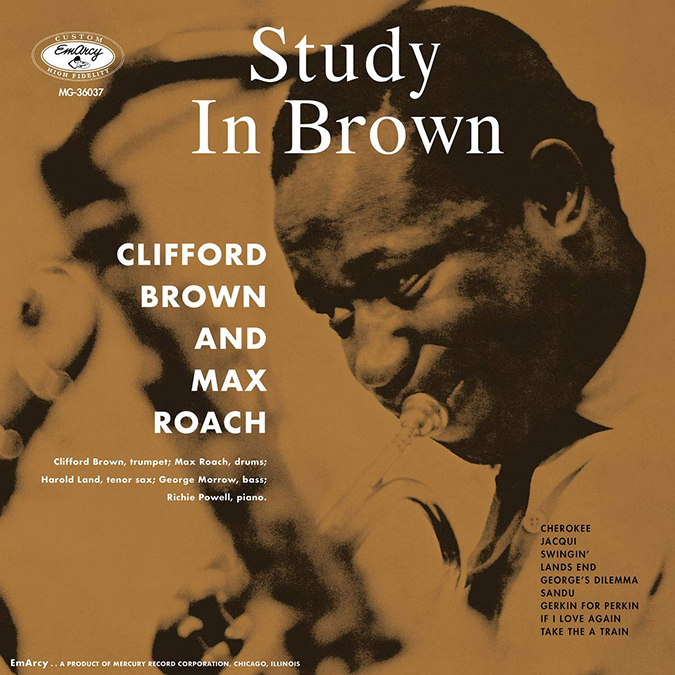 Ray Noble’s “Cherokee” kicks things off, and while it sounds very good on my CD, I immediately heard a more balanced sound on the new LP that allowed the instruments to breathe, so I further compared the two. On the CD, Roach’s cymbals and snare drum had more splash and sharpness on the opening of the track, and the other instruments had a brighter, livelier presence than they did on the new pressing. But when the ensemble joins together to play the theme, the vinyl gave more space to the instruments and it was easier to pick each of them out. Land’s brief statement during the intro had a warmer, more natural tone and I could more easily hear his breath control on the instrument.

Brown’s solo on “Cherokee” is impressive in its speed and agility, but he maintains a firm grasp of melody and a clear sense of how he wants the solo to develop. When I turned back to the CD, the other instruments, especially Roach’s drums, sounded too close to Brown, as if they were crowding in on him a bit. Smith’s remaster arrays them behind him, letting me hear how important their contributions were in giving his statement a firm foundation.

The ensemble playing on the intro to Richie Powell’s “Jacqui” flowed with a bit more ease on the LP than on the CD, and the separations between each player were more pronounced. Roach’s cymbals had less high-end edginess than they did on the CD, and, as on “Cherokee,” had less tendency to encroach on the other instruments. The individual notes in Powell’s solos throughout the album had more room to ring out and decay naturally, and his chording sounded more solid. Brown’s and Land’s horns also had a more liquid tone during their solos and more delicacy at points. Smith’s mastering allowed notes to glide into each other with less effort. 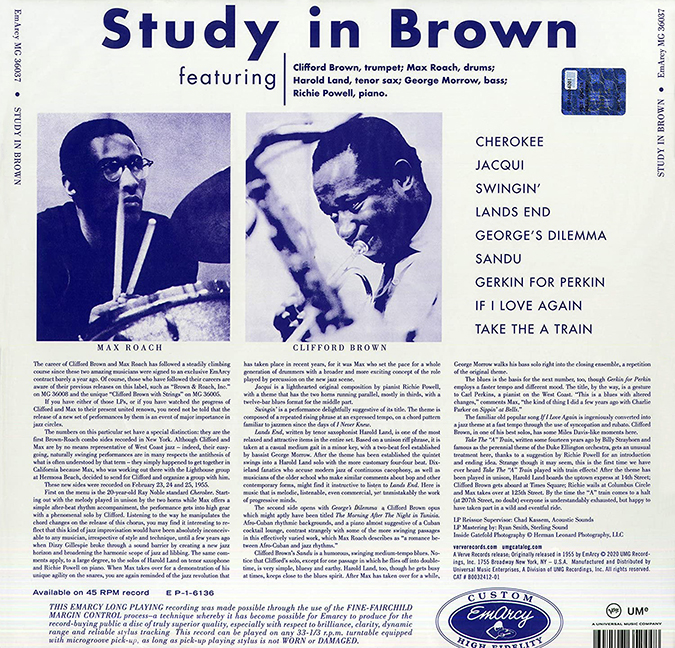 Roach’s ride cymbal taps open “George’s Dilemma,” one of several Clifford Brown compositions on the album, and they were more solid and vibrant on the new pressing. Morrow’s bass lines had a more satisfying physical presence and greater definition, and when he and Powell play lines in tandem they felt more simpatico. The reverb on Roach’s cross-sticking carried a fuller, more three-dimensional echo on the LP. When I compared the sound of the horns on the intro to Brown’s “Sandu,” they sounded grainy on the CD, while on the LP they interacted more naturally and sounded less forced.

The CD has some zip that I missed at first when playing the LP. Roach, Morrow, and Powell announce “Take the A Train” with a re-creation of a train leaving the station, with Brown and Land joining in as the train picks up speed and blows its horn. The CD presents the tune with lots of drive and spirit, but now it feels too insistent and rushed after playing the LP several times. The LP let the opening of the track unfold in a more relaxed fashion and build more gradually.

When listening to the new LP, I felt at times that it could use a little more top-end excitement, which made me wonder if Smith had a first-generation tape to work with. In my system, the LP played back more quietly than the CD, but a slight bump in volume snapped everything into focus and solidified the imaging of each instrument. Conversely, a slight drop in volume helped tame the CD’s occasional edginess, but each time I returned to the LP, I encountered music that sounded more natural and unforced. Instruments sounded more tonally accurate, and the soundstage was more spacious.

The Quality Records pressing is utterly quiet and flat, and is housed in a heavy cardboard gatefold cover. The sepia-toned cover photo is nicely reproduced, as are the blue monochrome liner notes and rear photo. The photos on the inside of the gatefold are by eminent photographer Herman Leonard and are unique to this edition. 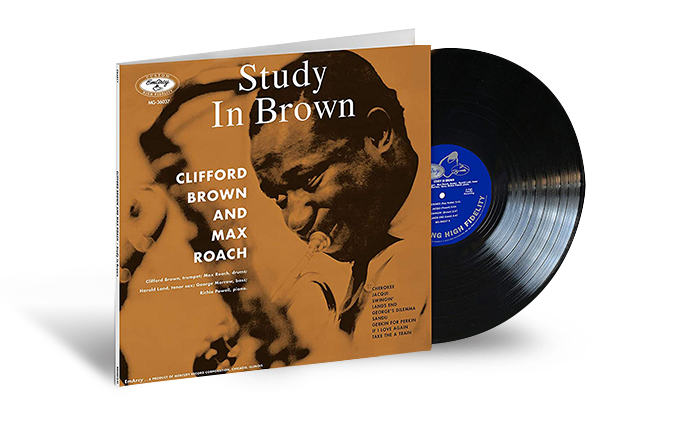 Original copies of Study in Brown in good, playable condition are costly, and even later pressings will probably set you back more than the $34.98 price (in USD) of this well-packaged, musically satisfying reissue.