There’s very little crossover on the song lists between this new album and Ella in Berlin, or with the 1961 recording of a show that Verve issued in 1991 as Ella Returns to Berlin. This 1962 performance at the Berlin Sportpalast included a few tunes from two LPs, Clap Hands, Here Comes Charlie! (1961) and Rhythm is My Business (1962), which Verve had released just before Fitzgerald’s European tour. The remaining tracks are a varied selection that shows the singer’s versatility and range. 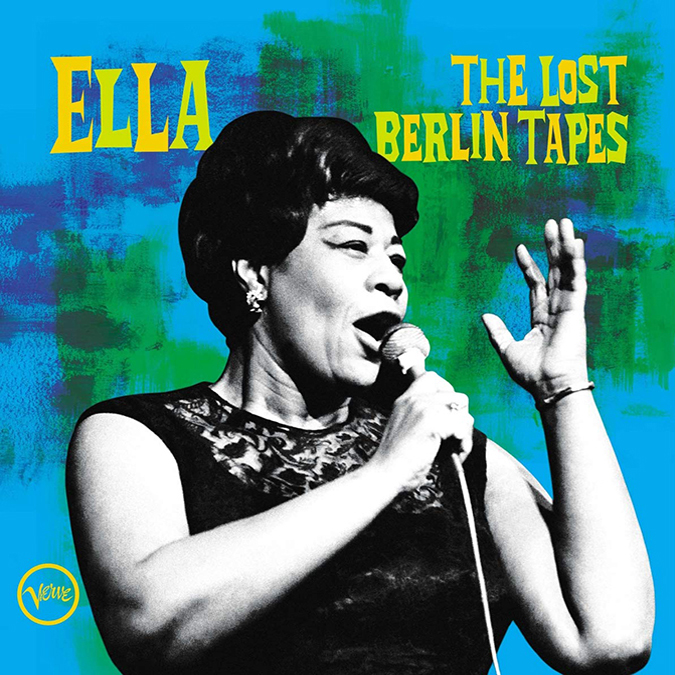 Paul Smith on piano and Wilfred Middlebrooks on bass were part of the quartet that appeared with her in 1960, and they backed her for this 1962 show, along with Stan Levey on drums. Fitzgerald takes the stage to applause as the trio swings into Irving Berlin’s “Cheek to Cheek,” and her phrasing and playful timing with the lyrics are reminders of her ability to bring something fresh to songs she had performed countless times. She begins “Jersey Bounce” with some scat singing, which she returns to after singing a couple of verses, making it clear that she could improvise as well as any other musician of her generation.

In addition to the Irving Berlin tune, Fitzgerald reaches into the repertoire known as the Great American Songbook for “I Won’t Dance,” “Someone to Watch Over Me,” “Summertime,” and “C’est Magnifique.” Other songs on the recording, including “Good Morning Heartache” and “Taking a Chance on Love,” have been covered by other singers, but “Mr. Paganini” is known almost solely because Fitzgerald first sang it in 1936 and kept it in her repertoire as a vehicle for scat singing. She works her magic even on the lesser-known tunes, investing them with her charm, faultless timing, and deft phrasing.

All three of the Berlin releases include Fitzgerald’s take on “Mack the Knife.” She was so quick-witted that when forgetting the lyrics to one of the verses during the 1960 performance of the song she coolly improvised her own. During the rendition on this 1962 recording, she forgets the name of the city she’s in, calmly blows past it, and then sheepishly cops to the mistake after the enthusiastic applause dies down. Each version of the song takes a unique rhythmic approach, with the later recording moving at a slightly faster pace that lets Smith show his command of stride piano.

Smith and Middlebrooks had played extensively with her, and Levey had previously backed her on occasion. Part of the pleasure of The Lost Berlin Tapes is hearing how impressively these three pros give her the accompaniment she needs. They never call attention to themselves, but Smith’s comping and fills give the music a lift and Middlebrooks’s playing is melodic and effortlessly rhythmic, meshing well with Levey’s sturdy, swinging drum work. 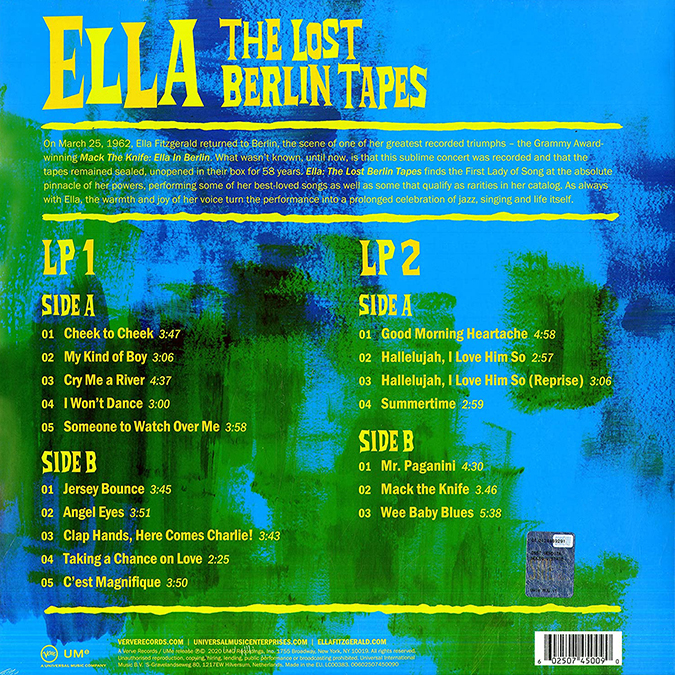 I compared the two-LP pressing with a CD-quality (16-bit/44.1kHz) download and found them to be very similar. Kevin Reeves handled the 16/44.1 mastering, which is a little louder than the LP and has a slightly more pronounced high end, but the sound on both formats is detailed and deep. Ryan Smith did the vinyl cut, and it is warmer overall while still allowing for precise imaging of the instruments. Paul Smith’s piano has a more natural resonance on the vinyl, but Middlebrooks’s bass has a sharper attack on the download. I give the LP a very slight edge over the download, but I would be happy to listen to The Lost Berlin Tapes in either format.

The Czech Republic’s GZ Media pressed the vinyl for The Lost Berlin Tapes and I continue to be pleased with the quality of their work. The colorful packaging evokes the early 1960s nicely, and Nicholson’s liner notes provide good background and context.

There’s no shortage of live Ella Fitzgerald recordings. More than 20 were released during her lifetime, and The Lost Berlin Tapes is the eighth one to be released since she died in 1996. Each of them has something unique to offer—she often varied her repertoire, and, in this case, her interpretation of “Hallelujah, I Love Him So” alone is worth the purchase price. She takes Ray Charles’s 1956 hit and makes it jazz without sacrificing its R&B core. It’s one of 17 tracks on The Lost Berlin Tapes that show, once again, why Fitzgerald has many admirers and few peers.