Luxury audio has recently been gaining market share in an industry that was, at its beginning, about the pursuit of the high-fidelity reproduction of sound and music. I’ve seen the shift in more and more product introductions of the past decade -- components costing six figures and systems costing millions abound.

What is luxury audio?

Luxurious is defined by Merriam-Webster’s 11th Collegiate Dictionary as “marked by or given to self-indulgence.” I’ve also seen it defined online as “the state of great comfort and extravagant living.” One definition of extravagant is “exceeding the limits of reason or necessity.” I think that most luxury audio products could be described as extravagant purchases: they exceed what is necessary for the accurate and neutral reproduction of music. The hobby of buying luxury audio has splintered off from the strict pursuit of high-fidelity sound. That first hobby, one practiced by wealthy luxury buyers, has now long been a part of high-end audio -- like it or not. 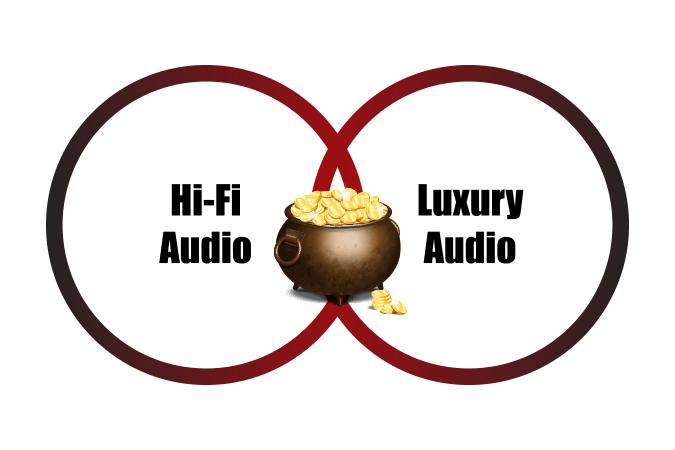 My own experience, and the economics classes I took in college, have taught me that the creation of luxury audio gear has everything to do with supply and demand. In my 20-plus years as an audio reviewer, I’ve spoken to countless manufacturers of high-end audio components, and the stories they lately tell are almost always variations on a single theme: a customer, a distributor, or a dealer demands something more expensive than anything that manufacturer currently makes. If it’s a distributor, she’ll agree to order five of them if the company commits to building them. It’s a business opportunity too lucrative to pass up for either party -- and a new product is born.

That’s not always a bad thing. Some manufacturers are able, following a period of research and development, to make a very good product even better, and they do. Others overreach and, despite an honest attempt, come to market with something that’s merely more expensive, and in some cases not as good as models they offer at lower prices. As occasional SoundStage! Ultra reviewer Pete Roth once put it to me, a company can “get out over their skis” with such projects -- I’ve seen it happen more than a few times.

The thing is, both types of products -- those that might actually advance the pursuit of high-fidelity sound within a given company, and those that look as if they do but actually don’t, and might even be not very good at all -- can sell equally well. Why?

Luxury buyers in high-end audio -- those power players who will spend in the high six or even seven figures for a stereo -- are unlike classic audiophiles in that they’re not pursuing actual hi-fi at all. In “How to Create a Brand that Attracts Luxury Buyers,” a July 10, 2020 article for ForbesWomen, a Forbes newsletter, Stephanie Burns wrote that “price conveys a message, too. A luxury brand with low priced items may be a unique value proposition, but it may also lead people to undervalue your product.” This happens in the high end all the time. I’ve had manufacturers tell me that they were forced to create more expensive products because potential customers did not take seriously their less-expensive components. In such cases, there is no assessment of performance by the buyer: no comparative listening sessions, no poring over measurements -- in short, no proof that it’s better. These potential customers have not taken the trouble to find out whether or not these products are designed better, built better, measure better, or actually sound better than lower-priced products.

Even shorter: It’s more about the buyer than about the thing bought.

In “The Emotions of Luxury,” the October 16, 2016 edition of Peter Noel Murray, PhD’s column “Inside the Consumer Mind,” on Psychology Today’s website, Murray wrote: “For these consumers, luxury is an integral part of their lifestyle. They experience emotions of trust, security, contentment, and confidence. These emotions are evoked by perceptions that their luxury brands are authentic and timeless. For these consumers, it is not enough that a product is well designed and crafted with the best materials and workmanship. The luxury brands they treasure have the rare and intangible quality of truth.”

How different is that luxury buyer from the guy who goes down to one of the few remaining local stereo emporia, buys an amp and speakers for a few thousand bucks, goes home, and hooks them up in his den? I’d argue that the difference is night and day. The latter guy is the classic audiophile. You may be that guy.

J. Gordon Holt, who founded Stereophile in 1962, when it was called The Stereophile, wrote in 1992, in “Where Did We Go Wrong?”: “People, let’s start getting back to basics. Let’s put the ‘re’ back into ‘reproduction.’ Let’s believe our own hype, and promote products that dare to sound as ‘alive’ and ‘aggressive’ as the music they are trying to reproduce.” In the penultimate paragraph of that article, he wrote that “the pursuit of that Holy Grail of perfect sound -- even temporarily, if not forever -- could give us back the sense of purpose we have lost in recent years.” That applies as much today as it did 28 years ago -- to some of you. 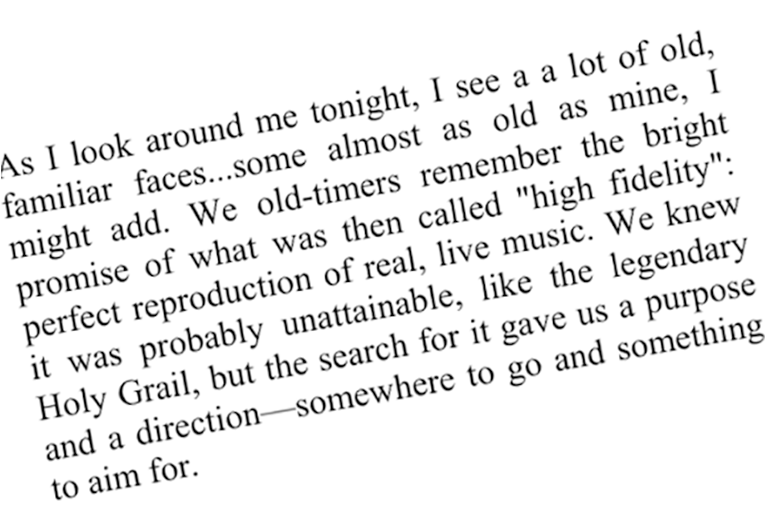 Many audiophiles still chase that dream of making music reproduced in the home sound as close to live as possible. The very notion that a better amp or bigger speakers might make that dream come true is enough to keep those audiophiles saving and searching for decades. For them, that’s what this hobby is.

The luxury buyer of high-end audio gear is driven by emotions entirely different from those that motivate the classic audiophile. According to Merriam-Webster’s 11th Collegiate Dictionary, the word audiophile first appeared in print in 1951. That appearance was in High Fidelity, in that magazine’s first year of publication. Today, a luxury high-end product priced in the six figures is just as likely to be advertised in Robb Report as in a publication that pursues an endgame of high-fidelity sound reproduction. Robb Report, founded in 1976 by Robert L. “Rusty” White, “began as a newsletter to sell [White’s] personal collection of Civil War memorabilia and Rolls-Royce automobiles,” per Wikipedia. With content often closer to advertorials than to the sort of journalism found on SoundStage! Ultra, Robb Report has not strayed far from its roots -- all manner of luxury automobiles, watches, clothing, and stereo gear are represented -- but the magazine has grown in popularity and influence. In 1989, High Fidelity was sold to what became Hachette Filipacchi Media, at which time its subscriber base was merged with that of Stereo Review and the title High Fidelity was retired. Stereo Review eventually became today’s Sound & Vision, now owned by Paul Miller’s AVTech Media Ltd., which also owns Stereophile and S&V’s other sister publications previously owned by Source Interlink. As of 2018, Robb Report published 19 editions of its magazine around the world -- subscribers to its Chinese edition alone numbered more than Sound & Vision’s total paid circulation of 132,000. The annual household income of the average Robb subscriber is $363,247, and that subscriber’s household net worth is $2.4 million.

The acquisition of luxury audio gear and the pursuit of high-fidelity sound reproduction are not the same thing. I often find myself writing about luxury audio in ways traditionally used by audio publications like SoundStage! Ultra and Stereophile to describe classic hi-fi products. I wonder if I’m writing about the wrong products, or writing the wrong things (i.e., about their sound) about luxury products -- the ones Allen Finn talks about on The WordStream Blog, in “5 Luxury Marketing Strategies that Drive High-End Sales”: “The sheer opulence that becomes a piece of one’s life when he or she buys free-range leave-in conditioner infused with dolphin tears, or an ornate bottle of some top-shelf botanical cordial.” I’m up for some opulence.

It’s in that very small area of overlap of luxury audio and high-fidelity audio that I try to find review subjects for SoundStage! Ultra. Would you be surprised if I told you that I come across very few such subjects? Perhaps that’s why I still write about high-end gear that I consider to be of high value and that still can cost as much as the average new car. Those reviews might not be read by the typical audiophile who just wants a good amp and a pair of good speakers for a few thousand bucks -- for that, we have SoundStage! Access. My writing also might not interest the luxury buyer who scoffs at speakers costing a mere $20,000/pair.

Reviewers delight in informing readers about a great value: “These speakers are absolute steals at one-third the cost of their competition!” But sometimes, that value proposition completely misses the point. In “The Psychology Behind Why People Buy Luxury Goods,” an article posted July 18, 2020 on Investopedia.com, Vanessa Page wrote about the search for authenticity in luxury purchases:

Researchers at Yale have determined that this quest for authenticity develops early in childhood. A study that tried to convince children that a cloning machine had produced their favorite toy found that most children refused to accept the duplicate as identical. It turns out that the sentimentality of the item -- the memory or feeling that comes from having purchased a genuine luxury good -- is part of the reason that we seek authenticity. In other words, for some people, treating yourself to a pair of fake Christian Louboutin brand boots would be the same thing as having not treated yourself at all.

This concept was defined by Walter Benjamin in his 1936 essay “The Work of Art in the Age of Mechanical Reproduction.” Benjamin argued that the more reproducible art becomes, the less it inclines the viewer toward contemplation and ultimately, the less valuable it will be. Theoretically, the more the buyer of luxury audio pays for a component, the closer he or she comes to something genuinely unique. This quest for the authenticity of genuine uniqueness is of supreme importance to them -- it tells that person what sort of person he or she is. A box that measures almost perfectly -- that even sounds perfect -- but is reproduced by the thousands is, by definition, fundamentally unsatisfying to such buyers. If anyone with a few thousand bucks can buy it, where is the specialness of what is bought, or of who buys it? As I said above: It’s more about the buyer than the thing bought.

Where does that leave us?