Assembling a Virtual System from Audiogon

I wondered -- if I were putting together a system of used components today, what would I buy? So this morning, housebound by COVID-19, I passed some time by going to Audiogon.com and assembling a virtual audio system. Because, well . . . why not?

We all know that you can find great deals on Audiogon -- a classified-ad website exclusively devoted to audio gear. We also know that you can get burned -- you need to pay close attention to what you’re buying, and from whom. I don’t shop on the site much these days, but I still have the last two purchases I made there: a Coda Model 11 stereo power amplifier I bought in 2017, and a Boulder Amplifiers 2060 stereo power amplifier I picked up a year later. I sought out those two models specifically, and when I found them -- the Boulder in mint condition, and the 25-year-old Coda a solid “9/10” (Audiogonese for 9 out of a maximum rating of 10) -- I didn’t hesitate to click Make Offer. I then wrote about the Coda and the Boulder, after first having the latter sent to Boulder for as thorough a checkup as any company makes available for used gear. Since then I’ve been very happy with both amps, and use them daily. 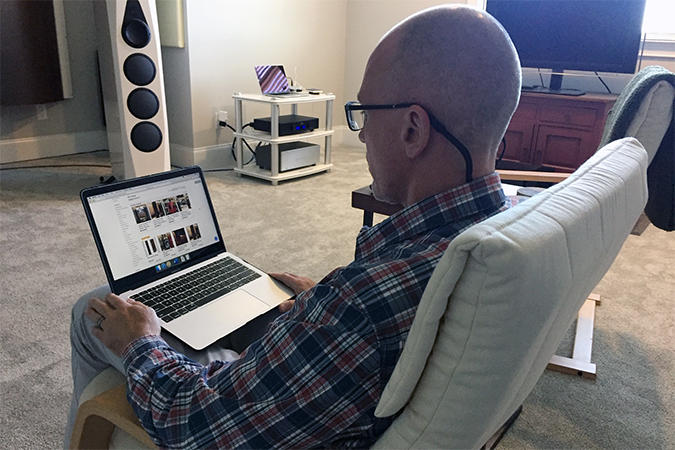 So here I was again at Audiogon, pretending to shop for a used system, looking for gear and restricting myself to components I have some familiarity with. I wouldn’t want to risk their incompatibility with each other and/or my room and then have to turn around and resell them, at a loss.

For amplification, I saw an ad from a dealer in Florida for a TAD Labs combo of C2000 preamplifier-DAC and M2500 stereo power amplifier: $15,500 for both. Their conditions were a claimed “9/10,” which Audiogon defines as “perfect physical condition, light use.” They looked great in the photos, and the dealer advertising them had a 100% rating over the past 12 months, and a 99.8% rating since 2002. This means that almost all folks have been happy buying from this seller, and that gives me some peace of mind. According to the seller, the TAD combo sold new for $54,000, though it appears that these particular units were never sold, and were instead used, sparingly, in demonstrations -- a good sign of limited use. The dealer states that he’s selling them because “These never get much attention in the US” -- and sure enough, I haven’t seen them talked or written about much. I do know that TAD makes superb products (see Howard Kneller’s report on the company on SoundStage! Global). I’ve reviewed TAD’s speakers and loved them, and have heard their electronics many times at shows. I like the C2000 because it’s a true analog preamp with analog inputs, and its digital inputs accept resolutions of up to 24-bit/192kHz. The M2500 can output 250Wpc into 8 ohms or 500Wpc into 4 ohms, which means I could use it with a wide variety of loudspeakers. Also, these two models were literally designed for each other, so synergy is all but assured. Seems like a great deal, so let’s jump on it. 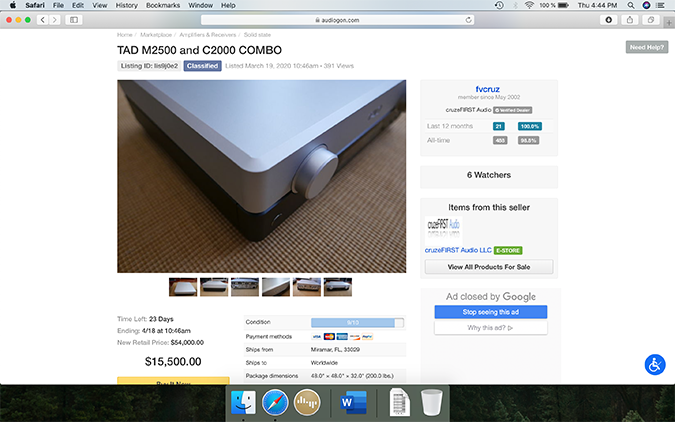 Speaking of speakers, let’s pick up this pair of jet-black Sonus Faber Liliums, condition 9/10. They’re offered for $38,900/pair, and I assume I can get them for about $35,000/pair, including shipping. They retail for roughly twice that, and these appear to be almost brand new. I’ve been super-impressed with Sonus Faber speakers, and recently reviewed their Olympica Nova III floorstander ($13,500/pair). The Lilium is a much bigger and, at 227 pounds, heavier speaker; its three front-firing 7” woofers and 11” passive radiator give it much greater reach in the bass (down to 20Hz), and its specified sensitivity of 92dB means that a pair of them will play plenty loud when driven by the TAD electronics. This pair of Liliums come from a dealer who’s enjoyed a 100% rating since 2013 -- important, as these will be shipped from outside the US, and I want them to arrive intact. I like the fact that the Lilium is still being produced, and the facts that I love Sonus Faber’s current “house sound” and have heard Liliums at audio shows makes me confident that they’ll be a good fit for me, my system, and my room. 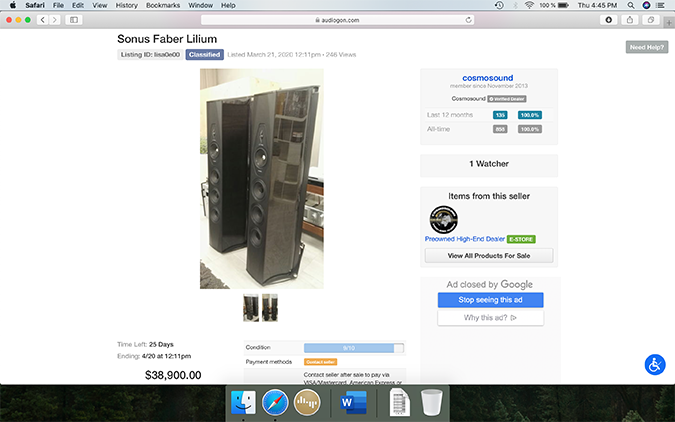 I’ll get all my wire from a brand I know well -- maybe Shunyata Research, or Audience, or Siltech: If I need support, I know that any of these companies will be available and responsive. Their engineering is solid, so I’m also assured of getting something that’s sturdily made and sounds good. And if I buy at a decent price, I should be able to experiment -- if something doesn’t jell sonically, I can always resell and try again with little loss of cash. In these categories there’s lots to choose from on Audiogon. I’ll set aside $5000 for power cords, speaker cables, and analog and digital interconnects.

For a source component, I’m gonna get a Lumin T2 music streamer-player. It retails for $4500, but you can buy one in 10/10 condition (so, basically new) on Audiogon for $3875 from a dealer with a 100% all-time rating. I like the idea of the Lumin T2 for this system because its USB jack will let me experiment with connecting it to the TAD C2000’s USB input and thus be able to use the preamp’s DAC. Or I could take advantage of the Lumin’s ESS Technology Sabre DACs by sending an analog signal from its balanced (XLR) outputs to the TAD’s analog balanced (XLR) inputs. What audiophile doesn’t like to compare DACs? The Lumin supports the services I use, Roon and Qobuz, so I’m all set there. It can also play PCM audio up to 384kHz and DSD512. 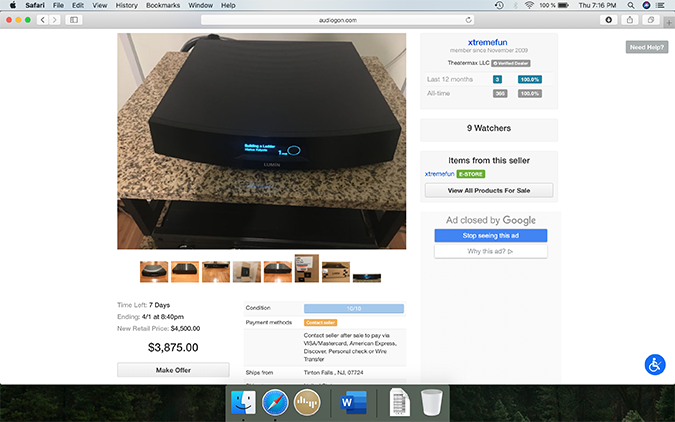 My last purchase will be an Artesania Audio Exoteryc rack. It retails for $8900, but it looks as if I can get a 10/10, four-month-old unit from Texas for about $4000. The Exoteryc’s four shelves will hold the Lumin and the two TAD components, with one shelf left over for, maybe, a power conditioner later on. Artesania’s products look stylish and well built -- a classy way to show off all my gorgeous, new-to-me gear.

The grand total of my Sunday-morning Audiogon fantasy shopping spree comes to just north of $60,000. That’s a lot of money, but I think the system I’ve virtually assembled has at least the potential of amazing sound quality.

But this dry run of buying a virtual system of used gear through Audiogon has convinced me of something else: I’d have trouble writing $60,000 worth of checks to buy all this stuff. Yes, there’s a good chance that everything would arrive in the conditions promised, without shipping damage -- but there’s also a really good chance that one of these items would disappoint me. And, of course, then I’d have to deal with service issues and return policies, and whether the original packing is intact enough to use for a return, and refund nightmares, and the list goes on and on. When you buy used, you take your chances -- after all, there must be some kind of tradeoff for those massive discounts off new-gear prices. Buying a used component can go either way: you could get a once-in-a-lifetime deal -- or you could lose thousands of bucks and be without main-system music for months as you’re waiting to resolve the issues.

My takeaway: It’s easy to spend 60 grand when the money isn’t real. If you dare take this path with your pockets stuffed with actual bucks, make sure you verify condition, shipping charges, and return and refund policy. And of course, buy only from the most trusted sellers. Tread carefully, and you might end up with exactly what you want at a bargain price.