Why You Want Your Audio Gear Measured

I have two German Shepherds, one of whom, Cutter, is just shy of three years old. He comes from a strong working line and, as such, has very strong drive. Recently, he was sitting at attention on my back patio, which is screened in -- a nice place to be in late fall or early summer. I still don’t know what he saw at the rear of our property -- deer or squirrel or fox -- but whatever it was, it needed chasing down now, and the screen covering the bottom section of that end of the patio put up little resistance to his determination. He went through it as if it wasn’t there. My wife insisted I do something about it.

So this past weekend I completed a little backyard project. The main task was to install additional 2x4 studs in the lower portion of the knee wall, spaced closely enough to prevent Cutter from charging between them and through the screen. I’m no carpenter, but this was a simple job. I gathered my tools: a circular saw, a tape measure, a bubble level, a carpenter’s square, a pencil, and two patio chairs to use as sawhorses. 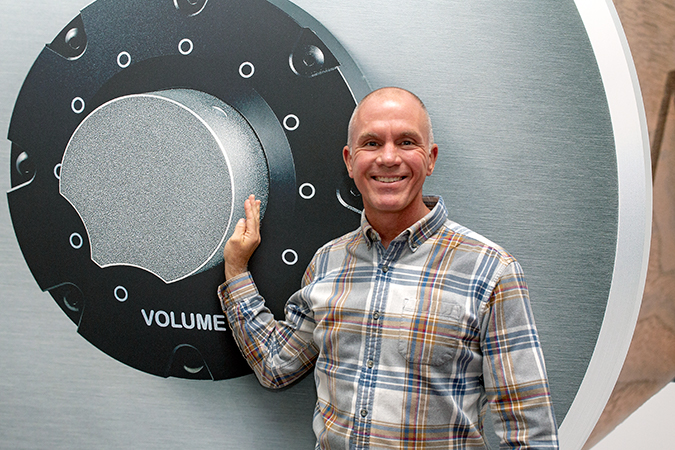 I measured the spacing between the studs already in place, marked the spots where the new studs would go, and measured the new lumber before making any cuts -- basic stuff. After cutting a stud, I placed it between the top and bottom plates of the knee wall and lined it up with the pencil mark I’d made on the top plate. I eyed each 2x4 as best I could to ensure that it was perfectly vertical, but before I drove the first nail into it I checked it with the bubble level. I installed fewer than 20 new studs, but with every one, the level told me that it needed further adjustment before it was perfectly plumb. My eye alone couldn’t ensure that sort of accuracy -- but with the help of the level, I could place each one almost perfect.

As I completed this project, it struck me that many audiophiles assume that their hearing is infallible -- that tools aren’t needed, only ears to tell them if an audio component is accurate. But just as my vision alone couldn’t ensure that the studs on my back patio were plumb, an audiophile’s hearing alone can’t ensure that he or she is experiencing accurate reproduction of the recording being played back through a given audio system.

Luckily, people are looking out for you. The engineers who design the best audio products know a simple truth: the most satisfying high-end audio products are designed using a combination of listening tests and measurements. When the two are considered together, and interpreted by a skilled designer, the result can be amazing accuracy: real high fidelity.

The analogy of my screened porch is simple but useful -- you can see the same sort of process used in the design and manufacture of products of all types. The most complex machines would be impossible to make without the use of measurements and the tools that take them. Can you imagine companies that make airplanes or medical equipment or space telescopes -- or, well, most anything complex -- doing so without the use of any type of measuring device? Would these items even exist if we had only our five senses to rely on in designing and engineering them?

If we can agree that, for instance, our loudspeakers are best when designed through the use of listening tests and measurements, the next question is how or even if that applies to the end user -- the audiophile. In a sense, it doesn’t, at least not directly. If you buy a pair of speakers from any of the companies we typically discuss on SoundStage! Ultra -- EgglestonWorks, Magico, Rockport Technologies, Vivid Audio, Gryphon Audio, Tidal Audio, TAD, etc. -- I can promise you that you’re getting a speaker that was designed by an engineer who used measurements and listening tests. I’m not suggesting that, to properly enjoy your audio system, you must first measure it to ensure that it’s accurately spitting out the input signal -- that work has been done for you.

If your goal is high-fidelity playback, however, you should pay attention to whether measurements were used in the design of the product you’re considering. As I wrote last month, in “Being an Audiophile Is Not a Serious Endeavor. Or Is It?,” the primary metric the audiophile should use to measure his or her hobby is enjoyment. Now, you might immensely enjoy a product that is far from a high-fidelity device, and that’s certainly your choice. There might come a time, however, when you hear something vastly different from what you have at home, and want to know which product is more accurately reproducing the recording.

In all likelihood, the answer will be: the one that was designed using a combination of measurements and listening tests. It’s as simple as that.

When my wife and I walk out on our back patio, we can take pleasure in the fact that those studs are dead plumb. The only way that happens is with the use of a bubble level or plumb bob, or some other measurement tool, to back up what I could see with my eyes.

And a high-fidelity loudspeaker is way harder to design and build than my screened patio.