It was a simple proposition. Mark Sossa of Well Pleased Audio Vida, of Tysons Corner, Virginia, wanted to drive down to North Carolina and set up some of his best gear in my new listening room. Sossa is a distributor of nine brands of high-end audio gear: Aqua Acoustic Quality, Innuos, Linnenberg, QLN, Qualiton, Rethm, SGR, Gigawatt, and Swisscables. His plan wasn’t to haul products from all of those brands to my home -- just a few select pieces he’s especially proud of. That sounded like a good plan to me. I’m an audiophile -- of course I like to hear new stuff. Plus, I figured it would give me a great opportunity to hear a second system in my new room, which would surely help me wrap my ears around the sonic signature of my new space. 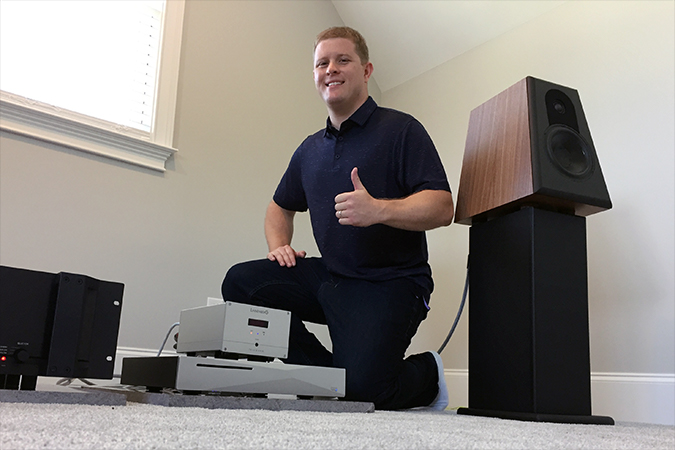 As you know if you read this column each month, I recently moved into a new home, and with that move came a new listening room. Last month I wrote about the basics of the new room -- its dimensions, construction materials, layout. I’ve installed the basic stereo system that I’d set up in our rental home, which I detailed in May of this year. That setup was good but hardly extravagant: Monitor Audio Studio loudspeakers on cheap stands, a Hegel Music Systems HD30 digital-to-analog converter, an Oppo Digital BDP-103 universal BD player, an Apple MacBook Pro laptop, and a 25-year-old Coda Model 11 class-A stereo power amplifier, all tied together with Siltech Explorer cables.

When Sossa arrived, we first unloaded his SUV, which was packed to the gills with gear. We discussed how we’d go about inserting this treasure trove of equipment, and decided to have some fun: We’d replace one component at a time, and listen for the differences in sound with each change -- Sossa was convinced that as each of his products was added, it would bring an improvement. Two components would be holdovers from my current system: the Siltech Explorer cables and the Coda Model 11 power amp. Everything else would go, one component at a time.

We kicked things off with the Innuos Zenith Mk.II music server ($3399), which would replace the laptop and BD player to become the only source component in my all-digital system. Just before making the swap, we listened to a few tracks -- those fresh aural memories would serve as a baseline for any changes in sound quality. Then, after each new component was swapped in, we’d then listen to those tracks again -- after matching the system’s sound level to what it had been before, using the Decibel X app on my iPhone.

I’d been hearing about Innuos for a while. Fellow SoundStage! writers Tom Mathew and Vade Forrester had both told me that their products sounded excellent, and there’d been a fair amount of discussion of this Portuguese company’s products on audio forums, all of it positive.

The Zenith Mk.II made a definite improvement. Immediately on firing up the first track, Sossa and I agreed that we were hearing a more resolved sound. When I played The Band Perry’s “If I Die Young” (16-bit/44.1kHz FLAC, Republic Nashville/Tidal), I could hear deeper into this vocal-heavy track than with my Apple MacBook Pro -- Kimberly Perry’s voice sounded less processed. I chalked this up to the Innuos being quieter than my MacBook. I wouldn’t call the improvement night-and-day, but as we listened more, I grew more confident that the transparency of my stereo had ratcheted up a notch.

Next up was the Linnenberg Telemann DAC-preamplifier ($5600), from Germany. You can read about my comparison of it and Hegel’s HD30 in my full review of the Linnenberg this month. The difference in sound between these two overachieving DACs was more obvious than what I’d heard between the music servers. The Telemann was more vivid in its reproduction of the Lumineers’ “Cleopatra” (16/44.1 FLAC, Dualtone/Tidal), the piano sounding more tonally complete. The Hegel scored points for the way it handled the dimensional aspects of this track, but there was no doubt that the Telemann was better at making tonal colors pop from the mix.

Last up was to switch in the Signature 3 loudspeakers from the Swedish company QLN ($6999/pair). This easily produced the biggest difference in sound we heard that day, which was no surprise -- speakers almost always change a system’s sound more than do electronics and cables. The two-way, stand-mounted QLNs produced sound that was immediately larger and more substantial -- they’re much bigger speakers than the Monitor Audios, and we could hear it. Soundstages grew in every direction, and the bass went deeper. The soft-dome tweeter in each Signature 3 somewhat softened the highs, making the overall sound more relaxed vs. the ribbon-tweetered Monitors -- less an outright improvement than simply a difference that some listeners will prefer and others won’t. This listener was impressed with how natural the Signature 3s sounded.

After Mark Sossa and I had finished installing all his gear in place of mine, we spent the next few hours trading tracks via Roon, listening, and chatting. What I learned about him and Well Pleased Audio Vida is that, unlike many audiophiles and audio dealers and distributors, he doesn’t have the goal of acquiring more expensive gear as time goes by. Sossa doesn’t trade in budget equipment, but he also doesn’t sell the outrageously expensive gear that’s becoming less and less relevant in today’s world. His goal is to sell products capable of a level of sound quality at least equivalent to that of the super-expensive stuff, at prices reachable by many audiophiles. He does this through choosing his brands carefully, and ensuring that the sonic synergy of those brands’ products is optimal, to result in a sound whose overall quality is greater than the sum of its parts.

Well Pleased has more I want to experience -- the Gigawatt power conditioners from Poland look outstanding, and the SGR racks from Australia had already caught my eye in Munich, at High End 2018. Maybe a follow-up visit will be in order early next year.