What I'd Buy: Integrated Amplifiers

Many, if not most, recent reviews of integrated amplifiers in the audiophile press begin by telling you two things: 1) that the integrated was once looked down on by multibox-craving audiophiles, but is now accepted as a real high-end component; and 2) the integrated’s single-chassis design has some advantages over separates -- e.g., at least one fewer pair of interconnects, and shorter internal signal paths.

The latest fact in the evolution of the integrated amplifier is that many models also include a digital section, typically a USB digital-to-analog converter, which either comes standard or as an option. These built-in DACs make for a greatly simplified system: add a pair of speakers and a computer-based source such a laptop or Mac Mini, wire it all up, and off you go.

There is a distinction to be made between an integrated amplifier with a built-in DAC and what’s commonly called a power DAC. The former is the more conventional configuration: an amplifier and preamplifier are housed in the same case with a separate DAC section, essentially combining all three components into a single product. A power DAC is an “all-digital” component that accepts a digital signal (or converts an analog signal to digital immediately at its input) and keeps the signal entirely in the digital domain until it reconverts it to analog at its outputs, to drive your speakers. Other than the potential for some minor functionality differences -- and perhaps some sonic advantages offered by some power DACs -- these two types of digitally equipped integrated amplifiers can be interchanged within an audio system.

In recent years, I’ve seen more and more audiophiles opt for integrated amplifiers. The reasons vary from wanting to de-clutter their listening or living rooms to wanting to downsize from the ever-more-needy world of separates and the current high cost of entry to the most exalted levels of audiophilia. It’s safe to say that the sound quality of integrateds has dramatically improved over the past few years at virtually all price levels, and I admit to a personal interest in the category -- I can’t help thinking that, if I weren’t a reviewer, I’d consider the de-cluttering impact of owning an integrated for my own audio system.

As of today, here are the integrated amplifiers I’d consider buying, beginning with the least expensive and working up:

I’d start with the NuForce DDA-100. This little guy costs $549 USD and, according to Roger Kanno in his SoundStage! Hi-Fi review, offers truly high-end sound at what has been, until now, “receiver money.” This model is for the all-digital audiophile -- it has no analog inputs. Its 50Wpc into 8 ohms should power most of the bookshelf loudspeakers it’s likely to be paired with, and, like the AudioQuest DragonFly DAC mentioned last month, the DDA-100 has got the proverbial cool factor down.

Bel Canto Design e.One C5i ($1995) has a built-in DAC and outputs 60Wpc into 8 ohms. I’ve always liked the easy-to-read displays of Bel Canto components, and the heft of this one’s chassis sets it apart from mass-market offerings such as receivers. The analog inputs give you some flexibility that the NuForce lacks, and the sound is sublime. The e.One C5i is a solid choice for a desktop system: think KEF LS50 speakers, a Mac Mini, and the C5i.

If you want a power DAC with a hefty power rating (150Wpc into 8 ohms), step up to the NAD C 390DD Direct Digital ($2599). The modular design means that it can be configured the way you need it -- DAC, analog input, and phono stage modules are available -- without your having to pay for functionality you don’t need. The C 390DD can put a vise-grip on big, unruly floorstanding speakers too, for nice, tight bass. The point here is that its greater power output can put the NAD in systems the little Bel Canto just couldn’t handle. A big-boy amp to be sure.

The 37-pound Music Culture Elegance MC 701 ($4495) doesn’t have a built-in DAC, but it does have balanced inputs, and build quality a cut above that of all the designs mentioned above. Its 120Wpc into 8 ohms comes courtesy of a large toroidal transformer, and its first 10W of output are claimed to be in pure class-A. This could be just the model for those of you uninterested in class-D amps.

Hegel Music Systems H300 ($5500) sports a beefy power rating -- 250Wpc into 8 ohms -- that should suffice for just about any speaker you’d care to name. A DAC comes standard in this model, making it quite a bargain when you consider just how good Hegel’s DACs are. GoodSound! chief Hans Wetzel bought one for his personal reference. I wouldn’t hesitate to use the H300 to drive all but the biggest speakers in the biggest rooms. For what it offers, the Hegel is a steal.

Can we get really serious for a second? Serious as in potentially state-of-the-art sound from an integrated amplifier? Though we’ve not yet reviewed it, Ayre Acoustics’ AX-5 (150Wpc into 8 ohms) might be just that, based on what I’ve heard about its circuit design from Ayre. At $10,000, it had better be really, really good, and from what I heard from it at last fall’s Rocky Mountain Audio Fest, I suspect it is. It makes this list because, based on everything I’ve heard from Ayre components through the years, I wouldn’t be scared to order an AX-5 without a home audition. From me, that’s a high recommendation.

I’m not sure if the Simaudio Moon Evolution 700i is better than the Ayre AX-5, but it’s the best integrated amp that reviewer Philip Beaudette has heard, and we all know that Simaudio has a reputation for building really fine gear. At $13,000 it’s expensive, but then again, its stunningly built 60-pound chassis is packed with proprietary parts to produce its rated 175Wpc into 8 ohms. No discussion of topflight integrated amps is complete without it. 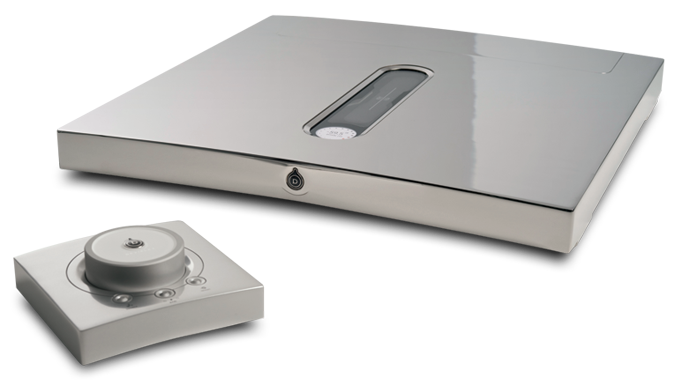 The Devialet D-Premier is perhaps Doug Schneider’s all-time favorite electronic audio component. It costs a whopping $15,995, but it could be among the most transparent source-amplification components available today -- when used within its power rating of 240Wpc (8 ohms) and with speakers above 4 ohms. This power DAC has no conventional analog inputs, though its A/D converter does allow for their inclusion. Its wireless capability, unique appearance, and sexy remote control make it the total package in a state-of-the-art integrated amplifier. Man, I want one of these.

How close can integrated amplifiers come to separates in terms of sound quality? Perhaps closer than those who still make only separates would have you believe. I think the key is to use an integrated comfortably within its power ratings, and with speakers that don’t demand super-low-impedance driving capability. Those prerequisites satisfied, I think you can build a rig based on an integrated amp that can communicate music at the highest levels of fidelity. You can also get great bang for your buck at the entry level. But at either end or anywhere between, the integrated amplifier is one of the hottest product categories of the last few years. And the field is ripe for the picking.