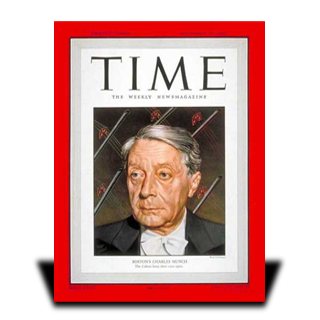 Back in the glory days of RCA Victor’s "Living Stereo" LPs, Charles Munch and the Boston Symphony Orchestra shared with Fritz Reiner and the Chicago SO that label’s top honors, recording big chunks of the basic orchestral repertory along with valuable examples of their respective personal specialties. Reiner (1888-1963) was in Chicago only ten years (1953-1963), and toward the end of his first season there began his celebrated series of stereophonic recordings. Toward the end of his tenure, however, illness caused him to cancel plans for the orchestra’s first European tour, and also kept him from fulfilling his commitments on several of the concert and recording dates scheduled for him in Chicago. His former pupil Walter Hendl, whom he brought with him as associate conductor (and who served as director of the orchestra’s summer activities at Ravinia) took over many of Reiner’s concerts and also wound up recording in his place with such soloists as Jascha Heifetz, Henryk Szeryng, Gary Graffman and Van Cliburn. Munch (1891-1968), though less than three years Reiner’s junior, enjoyed better health and had a longer tenure in Boston, succeeding Serge Koussevitzky there in 1949 and stepping down in 1962, not because of illness but simply in order to base himself once again in Paris and pursue other objectives.

Munch had not been known in America, except for a few concerto recordings, until the end of World War II, when he began recording with the Paris Conservatory Orchestra for Decca/London. Although born in Alsace when it was German territory, and actually drafted into the German army during the previous war, he emerged at the end of WWII as not only the most admired of French conductors, but also as a respected figure of the Resistance, who presided over celebratory concerts following the liberation of Paris. He made his US debut with the Boston SO at the end of 1946 and appeared frequently with the New York Philharmonic, with which he made some recordings for Columbia (among them an exciting account of the Saint-Saëns "Organ Symphony"). He also brought the French Radio SO to the US in 1948. Koussevitzky was still active when Munch succeeded him the following year, and in fact made some memorable recordings with the BSO after that succession, but one of Munch’s notable gestures in Boston was his inviting the legendary Pierre Monteux to conduct, record and tour with the orchestra. Monteux had been the BSO’s conductor immediately before Koussevitzky, and had reorganized and sustained it through some difficult years, but he was never invited back during Koussevitzky’s 25 years there. 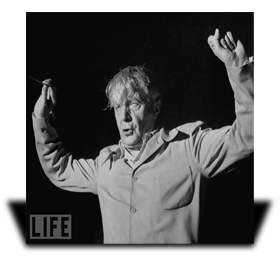 Like his Columbia recordings with the New York Philharmonic, Munch’s earliest ones with the Boston SO for RCA Victor were not only monophonic but actually issued on 78s. His first release was a memorable Beethoven Seventh (available now in a very good CD transfer from Sound Dynamics/Haydn House). Some Berlioz, Tchaikovsky, and Ravel titles (among these, Berlioz’s expansive "dramatic symphony" Romeo and Juliet, which had been neglected for years by everyone but Toscanini) were recorded twice during Munch’s 13 seasons in Boston. His recordings came out as regularly as Reiner’s, and were similarly admired.

When Munch left Boston, in 1962, he returned to the podium of the French National Radio Orchestra (which had been renamed Orchestre National de France) and was active also with the Lamoureux Orchestra; he made some recordings with both orchestras for Erato, some of which were issued in America by Westminster, some by Columbia on its Epic label, and some by the Musical Heritage Society. In 1967, however, a new orchestra, the Orchestre de Paris, was created for him. He shared with his colleague Serge Baudo the selection of its musicians and the conducting of its concerts. It was during the new orchestra’s first American tour that Munch died, in Richmond, Virginia, on November 6, 1968.

Two of the Epic LPs brought us perhaps the most memorable of Munch’s post-Boston recordings, both offering French music a little beyond the so-called basic repertory: one was a pairing of cello concertos by Lalo and Saint-Saëns, in which Munch and the cellist André Navarra formed an exceptionally effective partnership; the other comprised the Third and Fourth symphonies of Albert Roussel (whose Third was one of the numerous major works commissioned by Koussevitzky for the Boston SO’s 50th anniversary, in 1931).

For several years, in the 1970s and ‘80s, Erato was owned by RCA, which distributed the actual French-made LPs and CDs in the US, but that connection did not endure, and during the transitional period from LP to CD these choice Munch recordings did not reappear in either medium. What did appear, as imports, were several CDs from the French label Disques Montaigne of Munch’s concert performances with the Orchestre National, both in Paris and on tour in various other European cities. The Beethoven and Roussel symphonies mentioned above were among the titles represented, the former in a Beethoven program on MUN 2061, the Roussel on MUN 2041. All of these are attractive performances, in very decent stereophonic sound, but none is a match for Munch’s studio performances of the same works.

Apparently Munch, like Ernest Ansermet and Rafael Kubelík, did not require the presence of an audience to bring out his best and get his troops fully inspirited. The studio recording of the Beethoven with the Boston SO, as the Haydn House reissue confirms, is full of fire and spontaneity, as well as a brilliance that lights up the work far beneath its surface. Some listeners, in fact, have described it as the kind of performance that is not supposed to happen under studio conditions -- but it did. And the same comparison is afforded in respect to the Erato recording of the two Roussel symphonies and the live performances of them on Disques Montaigne.

Actually these Roussel recordings all come from the same period, though with different orchestras. The Third with the Orchestre National was performed at the Edinburgh Festival in 1964 and the Fourth is from a concert in Besançon in 1966; both symphonies were recorded with the Lamoureux Orchestra for Erato in 1965, and now are offered on a splendid-sounding CD from High Definition Tape Transfers (though in this instance the source was not tape, but the Erato LP). HQCD206 also includes a substantial bonus in the form of Munch’s effervescent performance of Roussel’s exquisitely concentrated Suite in F (originally issued as the filler on an LP of Henri Dutilleux’s Second Symphony). 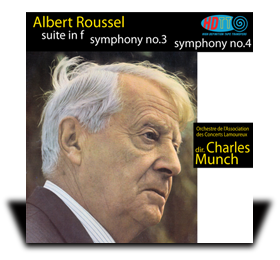 These studio performances of the Roussel works are even more strikingly superior to the live ones than in the case of the Beethoven Seventh. What we have here exudes the kind of electricity and sheer joy that most of us simply assume can only come from some mystical communication in both directions between performer and audience, but here Munch’s only "audience" was the Erato production team. I would not like to be pressed into declaring any single recording Munch’s -- or Reiner’s or anybody’s -- absolute finest, but I do not know of any from Munch that might surpass these downright magical realizations of Roussel’s music, and of the intoxicatingly free-wheeling Third Symphony in particular. The revered pianist Artur Schnabel liked to say that he was interested only in music that was "written better than it can be played"; in listening to these Munch performances, one might be forgiven for wondering if the music is actually as good as it sounds -- but then, of course, it is really a matter of an inspired conductor releasing all the marvelous things the composer put into the work, and Munch simply leaves no question regarding the value of this music.

Even now, however, there are still plenty of experienced listeners who have yet to discover this remarkable composer. Roussel (1869-1937), born five years after Debussy and eight years before Ravel (whom he was to precede in death by four months) tended to be overwhelmed by those two giants of French music -- in part because he was a late bloomer. Like Rimsky-Korsakov, Roussel was a naval officer in his youth, and he was particularly impressed by his visits to the Orient. At age 40, in fact, he took his new bride on a long visit to India and other Asian countries, and the impressions formed on that trip made themselves felt later in his opera-ballet Padmâvati. But that work did not appear until nearly a full decade later, and even then it bore the low opus number 18. It was not until still later, in the 1920s, that Roussel’s music began to be taken up by some of the most influential conductors of his time: Koussevitzky introduced Roussel’s works in both Paris and Boston, and it is hardly an exaggeration to state that his commissioning of the Third Symphony, which he introduced in October 1930, certified Roussel’s belated "arrival" in terms of international recognition.

Like his Moravian contemporary Leoš Janáček (1854-1928), Roussel may be said to have become a figure to be reckoned with (at least insofar as his orchestral output is concerned) very late in his life, with a remarkably rich production of works in a musical language very much his own. In his case as in Janáček’s, that language has sometimes been described as "abrasive," but it is somehow irresistible because it is never aloof or resistant toward emotion, and always motivated by the most intense emphasis on direct communication. The spiky rhythms and marvelous clarity of Roussel’s orchestration go hand in hand with a self-generating vitality that may remind us of yet another contemporary, the Danish master Carl Nielsen, who spoke unabashedly of "the life force" in describing his own Fourth Symphony. Together with the luminous score for the contemporaneous ballet Bacchus et Ariane (the concert premiere of which was conducted by Munch in 1933), the Third Symphony identifies Roussel at his most original and most treasurable -- and this recording of it certifies Munch as his overall most effective champion.

HDTT’s "HQCD" edition, actually does sound a good deal more wide-open-spacious than the LP pressings I had treasured over the years. If there is a hint of dryness in the sound, it suits this music’s angular character very well. Moreover, HDTT, with this issue, has not only given us a treasure that ought never to have been out of circulation, and in excellent sonics, but has made some real strides in the way of professionalism in its labeling and documentation. Some slight exceptions might be noted: Munch did not enlist in the German army, but, as noted above, was conscripted. The key signatures of the symphonies are not given, and neither is the opus number for any of the three works on the disc. But these are fairly trivial slips, and are as nothing compared with the misinformation offered frequently in major releases from some of the biggest of the big international record companies. In sum, this is an outstandingly welcome offering, perhaps the most basic of building blocks for an extended collection of this composer’s music.

For further exploration of Roussel’s orchestral works, note that Haydn House has brought out Jean Martinon’s marvelous Chicago SO recording of the Second Suite from Bacchus Ariane (together with Peter Mennin’s Second Symphony and Martinon’s own Fourth), and now that Erato’s back catalog is beginning to reappear from Warner Classics, we might hope for a reappearance of the Munch/Navarra concertos -- as well as the Dutoit recordings of the entire Bacchus score and other Roussel titles, and Martinon’s of Roussel’s ballet Aeneas. As for the specific works on the disc under discussion, there are more than a few recordings of them now, and not one known to me is less than pleasing, but these under Munch are the ones that will draw you back most powerfully.