J. Geils Band: "The Morning After"

For a while in the 1970s, it seemed that one American band might be a match for the Rolling Stones. The J. Geils Band had a firm foundation in blues, soul, and R&B, and few bands then touring were tighter or more dynamic onstage. I saw them four times in the ’70s, and only Bruce Springsteen and the E Street Band could match them for stage presence and intensity.

Guitarist John Geils founded the group in 1968 with singer Peter Wolf, blues harpist Richard Salwitz aka Magic Dick, keyboardist Seth Justman, bassist Danny Klein, and drummer Steve Bladd. There was nothing fancy or flashy about the J. Geils Band. The rhythm section was solidly in the pocket, and Geils played with precision, feeling, and no wasted notes. Magic Dick provided energy and virtuosity, and Wolf was a natural blues and rock’n’roll singer who was a dynamo onstage.

Mobile Fidelity Sound Lab has reissued the JGB’s second album, The Morning After, originally released in 1971, remastered by Krieg Wunderlich in analog from the original master tapes, and pressed by RTI on 180gm vinyl. The album built on and reaffirmed the strengths of The J. Geils Band (1970), and the single from the album, a cover of the Valentinos’ “Looking for a Love,” reached no.39 on Billboard’s Pop Singles chart. Wolf and Justman wrote five of the album’s ten songs; Gram Parsons covered one of them, “Cry One More Time,” on his first solo album. 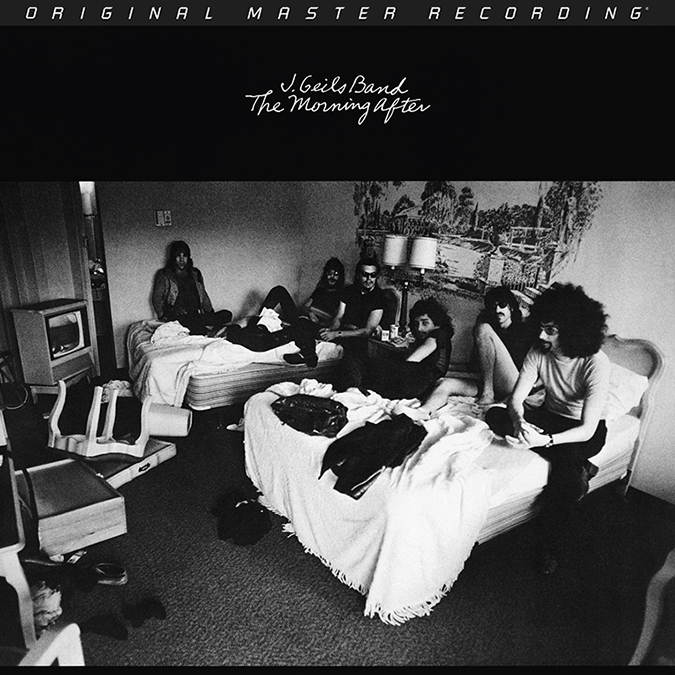 The dead wax on my early pressing of The Morning After informs me that George Piros mastered it. I also have the 1990 CD reissue, which doesn’t include a remastering credit, but after a little research I’m reasonably certain that George Marino did the job. I compared these editions by listening to the first track, Justman-Wolf’s “I Don’t Need You No More” -- the CD sounds somewhat crisper at the top end, but lacks the LP’s bottom-end force on the bass and kick drum.

When I switched to the MoFi, I noticed that Danny Klein’s bass had even better definition and attack than on the early LP, and Bladd’s kick drum had greater focus and more thump. Bladd hits the snare and hi-hat on the beat, and the MoFi lets you distinguish between the two sounds. Justman’s piano lines have more life and sparkle. In Magic Dick’s solo I could better hear the timbre of his harmonica, and each note of Geils’s guitar solo registered soundly, especially the feedback on the final note, which had a sharper edge. A quick relisten to the CD told me that it was lacking in comparison to either LP.

Juke Joint Jimmy’s “Whammer Jammer” became a showcase for Magic Dick in live shows, and made its first appearance on a J. Geils album here. The track is viscerally exciting on my old LP, and Dick’s playing is dazzling. From the new pressing I get a much clearer picture of how he controlled his breathing to create dynamics. Other details also make the track more vivid: Geils strikes chords at various points in the intro to punctuate the harmonica, and now I can hear him slide the chord back, reverb surrounding the notes. The band’s interaction with Dick, especially Justman’s piano lines, pop from the speakers.

The touch of tremolo in Geils’s guitar in “Cry One More Time” comes through more strongly on the new vinyl. The acoustic guitar in the right channel comes forward, and the room behind Wolf’s lead vocal and the harmony vocals lets me hear them better. In “Floyd’s Hotel,” another Justman-Wolf original, Klein’s bass has a hefty punch on the MoFi, Justman’s barrelhouse piano a more brightly mischievous edge, and Geils’s rhythm guitar a dirtier sound. 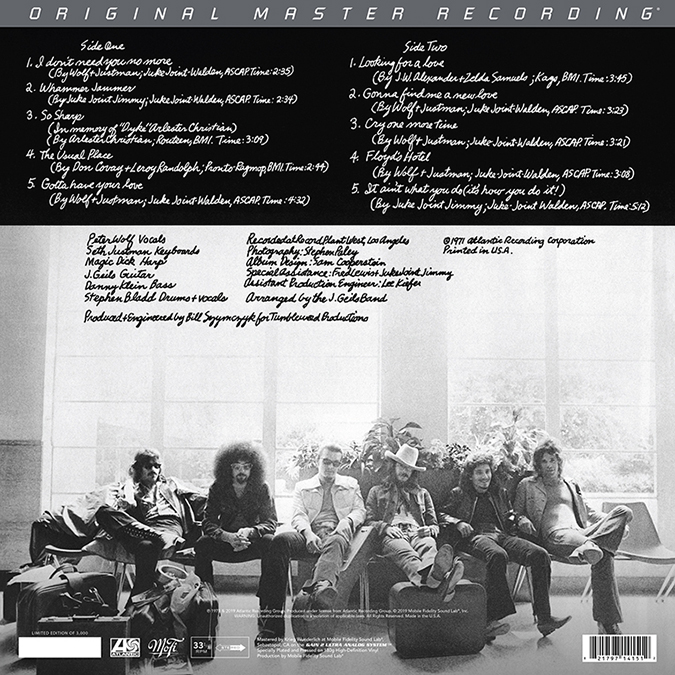 The album closes with an incendiary version of Juke Joint Jimmy’s “It Ain’t What You Do (It’s How You Do It!).” The MoFi lets the music spread out, and that space in turn lets Bladd’s kick-drum hammer harder, Justman’s Hammond organ swirl more energetically, and Klein’s bass grab my ear. Magic Dick’s harp has force and air behind it, and Geils’s solo sounds even meaner than on the original LP. Throughout the album, Wunderlich has let Wolf’s voice come forward enough to strengthen my conviction that he’s among the best rock and soul singers ever to appear on record.

Some Mobile Fidelity reissues of rock albums have brought out the usual audiophile values -- clarity, space, detail -- at the expense of the gut-level spark that made the originals so powerful. In The Morning After Wunderlich has struck a smart balance, letting each instrument leave its mark and giving Wolf’s voice its full due, while retaining the album’s air of rock’n’roll anarchy. As a result, “Looking for a Love” is confirmation that the J. Geils Band could rock hard, and their cover of Don Covay’s “The Usual Place” shows how exquisitely they could do a ballad. Wunderlich lets both sides of the band shine.

The reproduction of the iconic cover, featuring a black-and-white photo of the band sitting on a couple of beds in a trashed hotel room, is very good, as is the back photo of them waiting in the lobby. The cover is MoFi’s standard heavyweight cardboard, and my copy, pressed on high-quality vinyl by RTI, was absolutely flat and quiet.

Playing The Morning After led to my playing the other J. Geils albums in my collection. These guys were as good as the Stones -- I hope this is only the first of many Mobile Fidelity reissues of their records.