Durkin has been inspired by musicians as diverse as Frank Zappa, Charles Mingus, and Carl Stalling, but he never sounded derivative. The IJG released Leef, its last album, in 2008, and Durkin, who’d moved to Portland, Oregon, in 2006, spent the next several years raising a family and writing a book, Decomposition: A Music Manifesto, which Pantheon published in 2014. I was excited to hear that, after a long absence from recording, he’d completed an album under his own name. 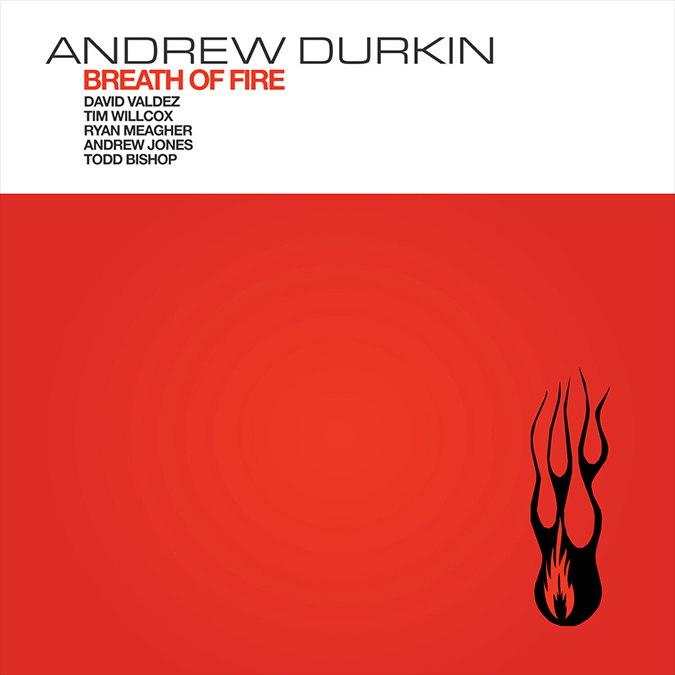 David Valdez and Tim Willcox, respectively playing alto and tenor sax, open “Flower Gun Song” by briefly playing an interval before Valdez states the theme, with Willcox behind him and the rest of the band beginning to fill in. Drummer Todd Bishop’s steady rock beat gives shape to a song that carries hints of 1970s detective-show themes, but quickly moves into other territory, then segues into a brief section of Brubeck-style formalism before an extended improvised close.

Durkin’s talent is to assemble a five-minute composition such as “Flower Gun Song” from disparate sections blended together with seeming effortlessness. For the title track, Willcox states the theme as the band quickly enters to develop the melody and expand it via counterpoint. Durkin takes a brief solo that leads into a free section with the reeds, and “Breath of Fire” closes with a restatement of the melodic themes. Bishop’s drumming is especially effective at driving and pacing this track.

Durkin establishes the feel of “Brega” with a lengthy intro on electric piano, with able backing from Bishop and bassist Andrew Jones. The piece has a ’70s CTI Records feel, over which Valdez plays a beautifully melodic solo. Willcox joins him in the track’s final third to harmonize on the melody. “Rock, Paper, Scissors, Tear Gas” has a solid rock’n’roll backbeat under a more complex harmonic structure that gives the reed players and Meagher room to develop intelligent, compelling solos.

In the past, I’ve highlighted the influences I’ve heard in Durkin’s compositions, to give readers an idea of what they might expect. But I find the music on Breath of Fire so much Durkin’s own that comparisons aren’t needed, and might even be misleading. Yes, Zappa is an influence, but only in the sense that Durkin learned from him how to blend genres and switch gears so that the result sounds natural, even inevitable. I also hear baroque influences in Durkin’s use of counterpoint, and the impressionists in his feel for harmony.

Still, nothing here actually sounds especially baroque, or has me thinking of any particular composer. But the melodies did work their ways into my head, and I found myself returning to them. One example: “Psychopomp Stomp” has a loose, aggressive rock beat and a driving guitar riff, against which Durkin throws other genres -- the music seems to transform into something new every few bars. Durkin not only defies categorization, he subverts it -- and it’s a lot of fun hearing him do it.

Other than Durkin, all of the players on Breath of Fire were new to me, and they’re very good. The recording, engineered and mixed by Dennis Carter and mastered by Brad Boatright, is very clean and open. It lets me hear the complexity of the arrangements by presenting the instruments in detail, and provides a sense of the dimensions of the recording space.

You can download the MP3 of Breath of Fire from Amazon, or in higher resolution in a FLAC file from CD Baby. You’ll find the CD at PJCE: Portland Jazz Composers’ Ensemble Records.