It’s appropriate that a tiny fragment of Johnson’s guitar would take on such significance. Johnson was a gospel blues singer, and the mysteries of his life deepen the already profound spiritual nature of his music. He never sold many records. Journalist Michael Corcoran notes that, in contrast to his contemporary Robert Johnson (1911-1938), whose discs have sold in the millions, CD reissues of Blind Willie Johnson’s music have so far sold only 86,000 copies in the US. 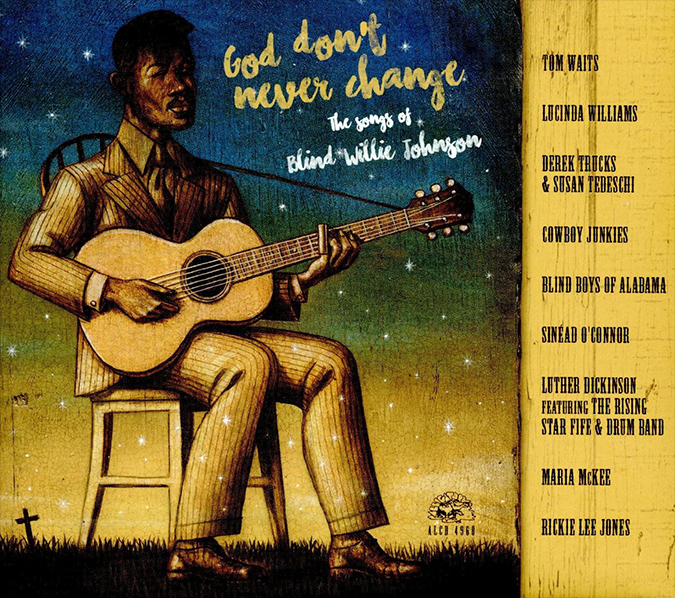 Corcoran wrote the liner note for God Don’t Never Change: The Songs of Blind Willie Johnson, a compilation of songs by Johnson newly recorded by current musicians. He helps clear up a few more mysteries about the singer, but what’s essential about Johnson is in his music, and the singers here don’t compromise it. They never forget that Johnson was a gospel songwriter, and they honor his intentions.

Tom Waits uses a sample of a 1939 field recording, “Country Rag (East Texas Rag),” and his own raspy voice seems to call from a time as distant as Johnson’s. Waits gives “John the Revelator” a haunting reading that is as powerful and spiritually stirring as Johnson’s. Derek Trucks plays a restrained, moving slide guitar in “Keep Your Lamp Trimmed and Burning,” and his wife, Susan Tedeschi, lets the song’s message guide her singing. The handclaps, the call and response, give the track an old camp-meeting feel.

Lucinda Williams sings “It’s Nobody’s Fault But Mine” in a powerful quartet arrangement that features Doug Pettibone on guitar. In the past I’ve found her singing too mannered, but here she reaches deep into the song to channel the spiritual import of Johnson’s lyric. The touch of reverb added to her voice at the beginning of “God Don’t Never Change” creates the effect of her singing in church. Pettibone accompanies her effectively on slide, but it’s the depth of Williams’s conviction that puts the song across. 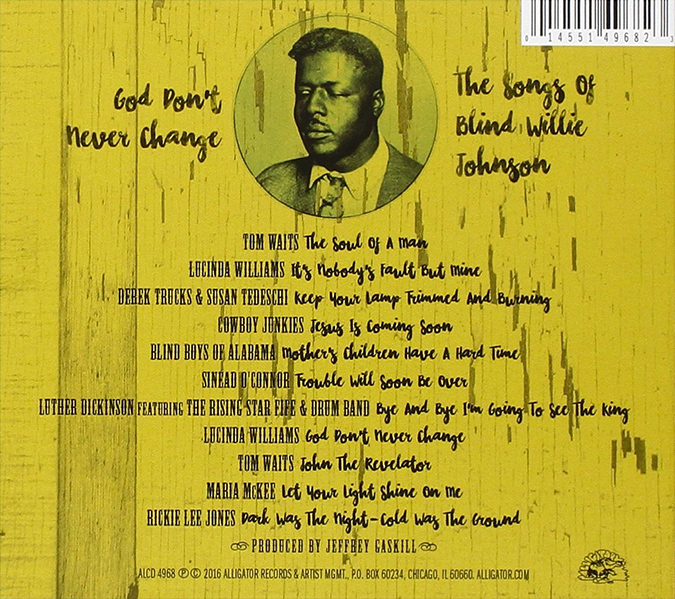 Maria McKee’s performance of “Let Your Light Shine On Me” is a stirring, Southern Baptist-style rouser that provides the album with some variety. Sinead O’Connor and members of the Irish band Relish make “Trouble Will Soon Be Over” into a more current-sounding rocker, and O’Connor’s passion gives the song life. In “Bye and Bye I’m Going to See the King,” Luther Dickinson and the Rising Star Fife & Drum Band underscore the intermingling of cultures, including Scottish, from which the blues developed.

The Cowboy Junkies sample Johnson’s voice in a haunting version of “Jesus Is Coming Soon” that makes the song historically distant, yet current in its sound and message. Rickie Lee Jones’s voice sounded forced to me the first few times I listened to “Dark Was the Night, Cold Was the Ground,” but I came to enjoy it, and Lee Thornburg’s old New Orleans-style horn arrangement well sets off the tune.

In his introductory note in the CD booklet, producer Jeffrey Gaskill recounts the many steps and hard work it took to complete God Don’t Never Change, which he funded through a Kickstarter campaign. It was all worth it -- Blind Willie Johnson’s spiritual vision shines through. The music is transcendent: terrible in its reminders that life can be difficult, and hopeful in its affirmation of faith.