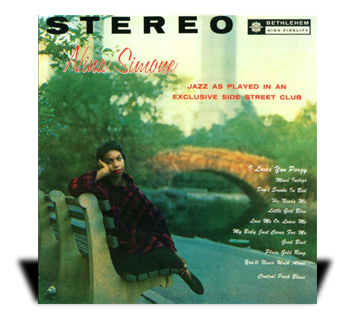 Little Girl Blue was Nina Simone’s first recording, made in 1958, when she was 24. It was her only full album of songs for Bethlehem Records. The label’s other Simone title, Nina Simone and Her Friends, comprises four tunes remaining from the earlier record’s sessions, and four songs each sung by Chris Conner and Carmen McRae. Simone had left Bethlehem for Colpix Records by then, and was unaware that Bethlehem was going to issue another title under her name. She had sold the rights to Little Girl Blue back to them for $3000.

In 1987, a UK television commercial for Chanel No.5 featured “My Baby Just Cares for Me,” from Little Girl Blue, and the ad’s popularity led to a reissue of the track as a single. It went to No.5 on the charts, becoming one of Simone’s biggest hits. The song features a jaunty, swinging piano line from Simone and solid backing from bassist Jimmy Bond and drummer Albert “Tootie” Heath. Simone’s training at the Juilliard School is evident in her piano solo, which alternates long blues runs with softer parallel left- and right-hand melodies in counterpoint.

However, it’s Simone’s contralto that makes the track special. She sings with a winning combination of grit and insouciance, and her references to then-current celebrities -- Liz Taylor and Liberace -- bring the lyrics up to the moment. Her piano accompaniment throughout Little Girl Blue is a perfect complement to her voice. She plays the chords with a light touch in “I Loves You Porgy,” her sole Top 20 Billboard hit in the US. Her reading of the song is coolly passionate; the pauses and turns in her vocal phrasing give her interpretation tension and weight.

Her take on Duke Ellington’s “Mood Indigo” shows Ellington’s influence on her piano playing, with a touch of Ahmad Jamal, in addition to her classical training. Her singing of the verses is swinging and spirited. Her own “Central Park Blues,” one of three instrumentals, offers ample evidence of her impressive command of the keyboard and her band’s skills in supporting her. Bond is a highly rhythmic player whose bass runs fill out the songs without getting in the leader’s way, and Heath is a model of subtlety and wit.

Little Girl Blue was a very solid debut whose balance of instrumental and vocal tracks gives a clear picture of Simone’s formidable talents. The cover says the music is “Jazz as played in an exclusive side street club,” but while the recordings do have an intimate small-club atmosphere, they weren’t recorded live. Bethlehem released the LP first in mono, and a few months later in stereo. This LP reissue is the stereo version.

The 180gm pressing is nicely done, but I needed to clean the disc to reduce surface noise, something I routinely do anyway. Simone’s voice is panned hard left, in the manner of early stereo recordings, and her piano is at the center of the soundstage. It sounds natural and resonates fully, as do the other instruments, although the bass and drums are also placed close to the center. As with Bethlehem’s other recent vinyl reissues, John Sigman’s remastering sounds like high-resolution digital and flows well.

Nina Simone’s influence extends well beyond her sales figures. Countless musicians, from Van Morrison to Nick Cave to Kanye West, have cited her as an inspiration, and the Animals had a hit with “Don’t Let Me Be Misunderstood,” which has been covered by a number of other rock artists. She was a civil-rights icon, and a vocal exponent of African-American pride. In her long career she recorded some duds, but more often she made gems like this one and Broadway-Blues-Ballads (1964). Her first album is a good place to start enjoying her, and this edition will do nicely.