Written by Rad Bennett
Category: Recording of the Month
Created: 01 May 2013 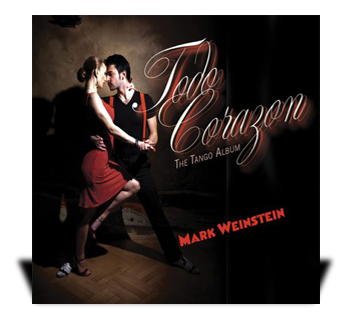 Mark Weinstein insists on doing things his own way. The bassist and trombonist took time off from music to earn a PhD in philosophy, and when he returned to music, his instrument was the flute, his technique and sound entirely self taught.

Weinstein plays intensely in Todo Corazón, as if to fuse into one the very roots of tango and jazz. At times he seems to deliberately play against the other musicians, which creates sounds of conflict and savage beauty. That might be the underlying assumption of this eclectic album: strident or sweet, everything is beautiful.

Those other musicians are Francisco Navarro, guitar; Raul Jaurena, bandoneón; Abel Rogantini, piano; and Pablo Aslan, bass. There’s no drummer, but it’s clear from the first track, “La Viruta,” that this will be no problem: both bandoneón and guitar are played percussively when need be. In another switch, the double bass is used as much for melody as for foundation. Some of the arco passages are gorgeous, as are the plucked figures in the upper register.

The musical conflict is at its highest at the start of Astor Piazzolla’s “Onde Nueve”: the flute and bandoneón seem to be at each other’s throats, each upping the other as the fray intensifies. After a calmer, central section the ruckus resumes, with now the piano joining in; what seems a contest for the listener’s attention leads to a powerful and dissonant ending.

There’s a sense of underlying restlessness even in the quieter numbers. In “Grisel,” in which Weinstein plays lyrical passages on bass flute, little tics and musical asides from guitar and bass keep the track from ever being entirely calm or boring.

The instruments are all closely miked, with plenty of presence. I would have preferred more depth and a slightly less stringent top, but the sound pretty much suits the music.