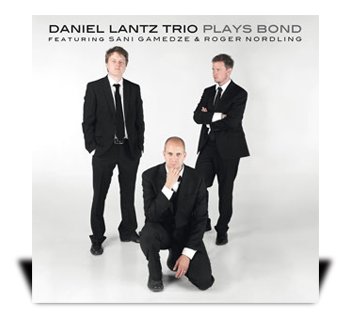 The James Bond movie series, now 50 years old, is probably as vital today as it was in the Sean Connery years. My son and I agree that Daniel Craig is the best Bond since Connery, and that the last three films are some of the most enjoyable the series has produced in years. The music in the films is almost as iconic as the main character, especially the themes composed by the late John Barry. But pop tunes written for them by other songwriters have also found their way into our collective memories.

Swedish jazz pianist Daniel Lantz chose the 12 songs on Plays Bond because, he writes in the liner notes, “It was the obsession with film music, in particular the Bond films, that made me start learning the piano in the first place.” Anyone who has seen the films will recognize most of the tunes, and if you’re like me, you probably heard many of them first on AM radio. But even if you know these songs well, Lantz’s takes on them will surprise you. “Nobody Does It Better” has a looser, more swinging feel than the original, a cool tempo change, and a very fine vocal from Sani Gamedze, who sings on five other tracks. Saxophonist Roger Nordling also helps out, here and on several other tunes.

In “Moonraker,” Gamedze’s singing is less theatrical than Shirley Bassey’s but just as dramatic and emotional, and Lantz’s accompaniment fully reinforces the harmonic beauty of Barry’s composition. Drummer Daniel Olsson’s shimmering cymbal work is a highlight of the track, but it’s Lantz’s sustained chords that give the song the grand sweep of the original, and bassist Erik Ojala helps reinforce the structure of the pianist’s beautifully developed solo. Olsson and Ojala are accomplished players whose restraint sometimes obscures how good they actually are.

In “The James Bond Theme,” reed man Nordling hits the familiar marks in a fresh way, his exciting solo showing a strong John Coltrane influence. Lantz comps beautifully behind Nordling, and his intelligently constructed solo flows naturally out of Barry’s melody -- and I was again struck by how strongly but unobtrusively both are supported by Olsson and Ojala.

Ojala plays bowed bass to set the tone for the opening of “Goldfinger,” a prime example of the sort of intelligent reinterpretation Lantz brings to these tunes. In this case, the pianist plays with a restrained romanticism that brings out the inherent beauty of Barry’s song. One of the enjoyable characteristics of Plays Bond is its balance of emotion and control -- although no one overplays or shows off, a current of strong feeling runs throughout the album.

Anders Westin recorded Plays Bond in Uppsala, Sweden; Lantz mixed it, and Per Ryberg mastered it. The sound is outstanding -- pristine, expansive, and exquisitely detailed. Ojala’s arco bass in “Goldfinger” is wonderfully textured and full, the cymbals ring out and sustain throughout, and Lantz’s piano reverberates clearly in the soundstage, each note chiming clearly. The terrific sound is a bonus to a very enjoyable disc.