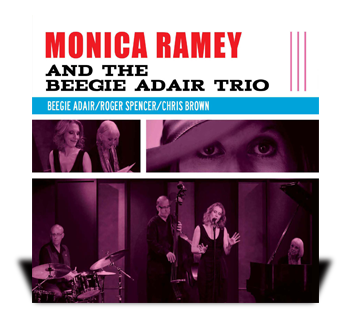 Nashville is well known for its fabulous country singers, but on the evidence of this CD, jazz, too, is alive there, and doing very, very well. Pianist Beegie Adair has 34 recordings to her credit, and she and her trio -- bassist Roger Spencer and drummer Chris Brown -- play a weekly date at F. Scott’s Restaurant & Jazz Bar, whose patrons must count themselves very fortunate to hear such amazing music. The three have played together a long time, and their musical lines weave in and out comfortably as the musical spotlight shines first on one, then the other. Though each has a distinct musical personality, they come together in perfect unanimity, seeming to breathe together -- “tight-knit” is an understatement.

Singer Monica Ramey used to go hear the trio, and once in a while they’d ask her to sit in. One thing led to another, and now comes this disc of songs from the Great American Songbook. Ramey sounds as if she’s been singing with the trio for decades. Her fine voice, when used saucily, as in “Witchcraft” here, can sound a bit like Ella Fitzgerald’s, but most of the time she reminds me of Barbra Streisand, whom Ramey lists as an influence.

Things get off to a rousing, rhythmic start with a driving version of “As Long as I Live,” followed by a ruminative “I Thought About You.” Later we’re treated to a jumping version of Steve Allen’s “This Could Be the Start of Something Big,” propelled by Spencer’s unerringly accurate and musical bass lines, to which is added a dynamic break: a saxophone solo by guest Denis Solee. A sultry version of Irving Berlin’s “Change Partners” adds another guest, trumpeter George Tidwell. Ramey makes this one downright sexy, singing as if whispering in the listener’s ear.

Both guests join in a heartfelt performance of “Will You Still Be Mine?,” but the final track is just Ramey and Adair in a nostalgic, pitch-perfect version of “Why Did I Choose You?,” a song that did so well for Streisand in her early days.

The sound throughout is spot-on, with presence, transparency, warmth, and ideal balances.

Though we can always hear them on recordings, the great female singers are almost all gone now. It’s time we embraced some of the great artists of this generation. I’d like to nominate Monica Ramey, especially when she’s singing with the Beegie Adair Trio. Lucky Nashville. Lucky you when you hear this CD.