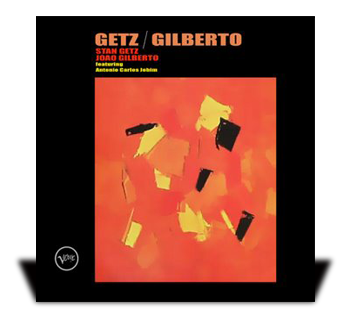 In the early 1960s, after tenor saxophonist Stan Getz heard Brazilian jazz played with a new beat called bossa nova (Portuguese for “new trend”), he and guitarist Charlie Byrd collaborated on the album Jazz Samba (1962). Having gotten a taste of bossa nova in the soundtrack of the mesmerizing Brazilian film Black Orpheus (1959), US listeners and musicians were primed for something new and innovative, and Jazz Samba was one of those rare jazz albums that topped the pop charts.

But by 1964, when Getz/Gilberto was released, interest in bossa nova had begun to wane. The album paired Getz with João Gilberto, a young Brazilian singer and guitarist. An all-important sideman was Antonio Carlos Jobim, who had written some of the music for Black Orpheus, most of the music for Getz/Gilberto, and is often considered the originator of bossa nova -- though he’s said that the rhythm and style came from Gilberto’s singing. As Jobim described it, “Bossa nova is a sophisticated branch of samba -- a dance with charming syncopations, unexpected beats.” Gilberto’s wife, Astrud, sang in English on two of the album’s eight tracks; the first, Jobim’s “The Girl from Ipanema,” became a monster hit, catapulting her to international stardom and her own series of solo recordings.

A perfect blend of American jazz and Brazilian dance, Getz/Gilberto struck everyone as a fresh, new breeze, and it, too, became a hit on both the jazz and pop charts. Within a year, bossa nova had become a household term; it seemed that everyone was writing and playing in the style. Getz/Gilberto won all sorts of awards, and is one of the top-selling jazz albums of all time. It has been reissued so often that I doubt anyone can have heard every one of the various LP, CD, and SACD versions. In addition to this new SACD/CD from Analogue Productions, I have Verve’s original CD and SACD and HDtracks’ 24/96 download.

Analogue Productions states on their website: “The original master tapes for this title had not been used since 1980 previous to this reissue. Also, for this Analogue Productions reissue the decision was made to master and present this album as it was originally mixed to master tape. With very few exceptions all versions of this title to date, including the original, have had the channels incorrectly reversed. With this version, you’ll hear this title as it was intended to be heard, without the channels reversed. And again, those reissues you’ve heard up until now -- definitely still breathy, warm and rich -- were made from something less than the master. Prepare to hear the veil removed.”

Correct! The channels of all three of my earlier editions are reversed -- even the HDtracks download, which sounds to me to have been made from Verve’s SACD master. In the original master tape, Astrud Gilberto’s lovely, childlike voice is in the left channel -- but the differences are more startling than that. In most previously released versions of this album, Astrud’s voice and Getz’s tenor-sax solos are on the right, and João’s voice is at the center and his guitar to the right, sounding rather disembodied. Practically everything else is crowded toward or on the right, including Jobim’s piano -- except Milton Banana’s drums, which are far to the left, in another country altogether.

Using the original master, Analogue Productions has created a wonderful SACD, as well as an edition on 45rpm vinyl. The crowding is gone; João’s voice and guitar are together in the center, Jobim’s piano and Astrud’s voice are on the left, Getz’s sax slightly right of center, Banana’s drums to the right. It sounds like a tight-knit ensemble, intimate in the best sense -- gone are some of the cobwebs of reverb that seemed to have been added over the years. The sound is clean, sweet, and simple. Some have pointed out that the damaged tape has a few tiny dropouts, but these are no bother unless you listen with headphones.

The sound is as close to perfect as I can imagine for this recording. Analogue Productions has stripped off the gauze to reveal the original focus and image of this remarkable meeting of musicians. If you love and cherish Getz/Gilberto, but have one of the editions that were made from anything that was not the original master tape, you ain’t heard nothin’ yet. Scrap those editions -- once you’ve heard this remastering, there’s no going back.