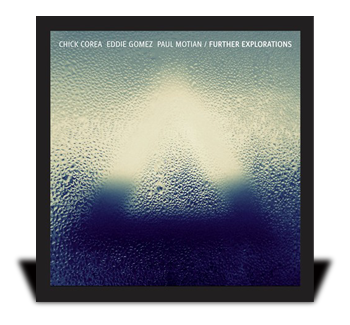 Chick Corea’s Further Explorations echoes the title of Bill Evans’s Explorations, his 1961 recording with Paul Motian and Scott LaFaro for Riverside Records. Motian, who died late last year, is on hand for this live recording with Corea and bassist Eddie Gomez, who played with Evans for 11 years. The trio worked together to choose material from Evans’s discography for a series of live performances at New York’s Blue Note in May 2010. In September 2011, Universal Music in Japan released this two-disc set of selections from those performances, and Concord has now made it available in the US.

The bit of chatter that precedes the opening track, "Peri’s Scope," suggests that the musicians constructed the sets on the fly, based on the list of tunes they’d come up with. That openness to chance no doubt helped contribute to the spontaneity of these performances. Recently, Corea’s playing has loosened up considerably. After years of playing jazz fusion, he has often played with dexterity but little feeling. Here, as on Forever, his recent reunion with Lenny White and Stanley Clarke, he takes greater risks, playing with great emotion. He’s such an established player that he doesn’t copy Evans, although the earlier pianist’s influence is clear, as are Corea’s admiration and affection for him.

Corea takes "Peri’s Scope" at a slightly slower pace than Evans did on Montreux II, but Motian kicks off the tune, and it’s clear from the beginning of disc 1 that the drummer set the tone for the whole enterprise, challenging Corea and Gomez to match his restless sense of adventure. Gomez gets a lengthy feature solo in "But Beautiful," which leads into a sensitive trio exploration of a tune Evans originally recorded with Stan Getz. Evans wrote but never recorded "Song No.1," a strikingly gorgeous piece that the trio develops with sensitivity and intelligence. Throughout both discs, all three musicians are attentive to each other, responsive to sudden inspirations, and feeding each other ideas and energy.

The recording of Further Explorations has an immediate small-club ambiance that brings you close to the musicians -- you can hear Gomez singing along with his improvisations. Corea and Motian are clearly etched in the soundstage, but I might have wished for just a bit more of Gomez in the ensemble sections. Paul Motian was 79 when he played this music, Corea 69, and Gomez 66. It’s inspiring to hear musicians still finding new things to say late into their creative lives.