Jazz organist Larry Young died too soon—in 1978, at the age of 37—but he had played on many notable sessions throughout the ’60s and ’70s, both as sideman and leader. He appeared on Miles Davis’s Bitches Brew and John McLaughlin’s second album, Devotion, both in 1970. He was a member of the Tony Williams Lifetime from 1969 to 1971, alongside McLaughlin and Jack Bruce. Young recorded as a leader for a number of labels, but his best-known album under his own name was Unity (1966), his fifth album and his second for Blue Note Records.

The organist’s early recordings and his outings with Grant Green and others displayed an appreciation for the soul jazz that Jimmy Smith had made famous on the Hammond B-3. When Young moved to Blue Note in 1965, he began to experiment with other strains of jazz. Unity shows the influence of modal jazz and hard bop, as well as mid-1960s avant-garde jazz. Young’s quartet on the album included Joe Henderson on tenor sax, Woody Shaw on trumpet, and Elvin Jones on drums. It’s challenging but accessible and remains one of Young’s best-known and most popular recordings. 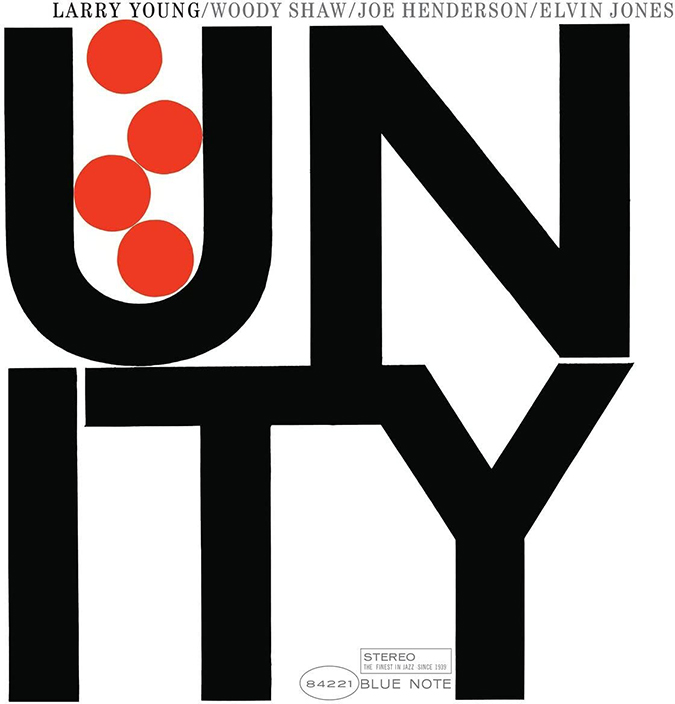 Blue Note has reissued Unity as part of its Classic Vinyl series, with Kevin Gray remastering and cutting the lacquer. According to Blue Note: “The pressings are all-analog whenever an analog source is available, with Gray mastering directly from the original master tapes.” Although I have a CD copy of Unity from 1987, I wanted to compare the new pressing with a 2014 reissue on vinyl (Blue Note Records / Ume B0020061-01) for this review. That release was part of Blue Note’s 75th Anniversary Vinyl Initiative, and Alan Yoshida cut the lacquer from digital copies of the original master tapes.

My review of the 2014 release explains why I preferred it over the CD version. When I went from the 2014 pressing to the new one, my first observation was that the Blue Note Classic version was quieter. United Record Pressing, based in Nashville, Tennessee, pressed the 120-gram anniversary LPs. Germany’s Optimal Media handled the pressing of the 180-gram LPs for this new series. The United pressings benefited from a deep cleaning, which reduced the groove noise to almost nothing, but when I dropped the needle on the Optimal pressing, the lead-in groove was totally silent.

Overall, both LPs were pleasing listens. Jones opens Shaw’s “Zoltan” with a marching beat, and I heard a bit more snap from the new pressing, but the snare rang out confidently on both LPs. Young’s organ entered with more force in Yoshida’s master, but Gray’s conveyed an airier quality in the bass pedals that felt more natural to me. The horns were more cleanly presented in the new pressing, but sounded natural on both versions. Jones’s cymbals were forceful and sustained on both LPs, but I found them to be more exciting and compelling on the earlier pressing.

“The Moontrane” is one of Shaw’s best compositions, and this quartet turns in a sterling performance of the tune. Shaw and Henderson sounded warmer and more in tandem during the opening statement on the new pressing, but the difference from the earlier LP wasn’t dramatic. I heard some subtleties in Shaw’s solo in Gray’s remaster that didn’t come across quite as strongly on the earlier pressing, but when I returned to Yoshida’s cut of the LP I felt that the solos of both horn players sounded natural and timbrally correct. Young’s comping sounded harmonically richer on the new pressing, but his organ solo was as gripping on both LPs. 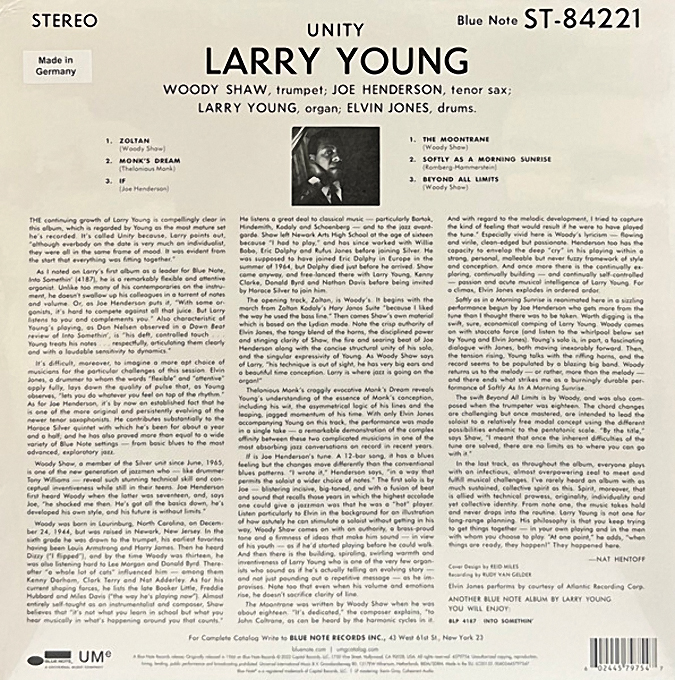 Young performs an interpretation of “Monk’s Dream” that shows an appreciation and understanding of Thelonious Monk’s melodic and rhythmic ideas, and he adapts them brilliantly to the Hammond B-3. The track is a duo performance, with Jones accompanying Young, and the organist’s improvisations are inventive and exciting, firmly centered on Monk’s unique melodic themes. Gray gave more space to the two instruments, and Young’s organ lines were more clearly separated from Jones’s drums on the new Blue Note pressing. Yoshida’s mastering on the 2014 LP didn’t feel crowded, however, and Jones’s snare-drum taps and ride-cymbal work sounded firmer and more muscular. As with the other tracks, Gray gave the bass pedals more air on the new pressing, but the bass lines were more firmly stated on Yoshida’s master.

I would have a hard time choosing between these two fine pressings. Gray’s remastering of Unity sounded more spacious than Yoshida’s and the music flowed easily when I compared them. Yoshida’s version of the LP had more zing, though, and reminded me of the Blue Note LPs in my collection that show Rudy Van Gelder’s name or initials in the deadwax. I’m tempted to lean toward the new pressing because the vinyl was quieter and the sound was warmer, but the 75th-anniversary reissue was livelier and, on balance, pretty quiet.

If you don’t have Larry Young’s Unity on vinyl, this is an excellent chance to add an important jazz recording to your LP collection. If you already have the 2014 reissue, I don’t think you have to trade it in for this new one. Gray’s version is perhaps more audiophile, Yoshida’s punchier. If you’re in a record shop and both copies are available, I’d buy them both. For about 60 bucks you’ll have two very good copies to enjoy and contrast. An original 1966 Blue Note pressing, by the way, will set you back at least $300.