By the time Joe Pass began his recording career in 1962, he was 33 years old. A heroin addict through much of the 1950s, he had kicked the drug with the help of the controversial Synanon rehab program. His debut LP for Pacific Jazz Records, Sounds of Synanon, featured musicians who were fellow clients. During the five years that Pass was associated with Pacific Jazz, he appeared on recordings by other artists on the label, including Les McCann and Gerald Wilson.

Pass’s album For Django was a high point of his time with Pacific Jazz. The quartet session was recorded in 1964 with guitarist John Pisano, bassist Jim Hughart, and drummer Colin Bailey. Pass told Guitar Player magazine in 1974 that Django Reinhardt was an early influence; For Django comprises songs associated with Reinhardt or written in tribute to him.

For Django has been reissued as part of the Tone Poet Audiophile Vinyl Reissue Series, which focuses on Blue Note recordings but includes some notable Pacific Jazz titles. Kevin Gray remastered the album in collaboration with Joe Harley, who produces the series. I’ll be comparing this pressing with a 1981 vinyl reissue of the album (Pacific Jazz Records LN-10132) and with a CD version that is part of The Complete Pacific Jazz Joe Pass Quartet Sessions (Mosaic Records MD5-207), a five-disc set released in 2001. I couldn’t track down mastering information for the 1981 LP, but Malcolm Addey remastered the Mosaic set. 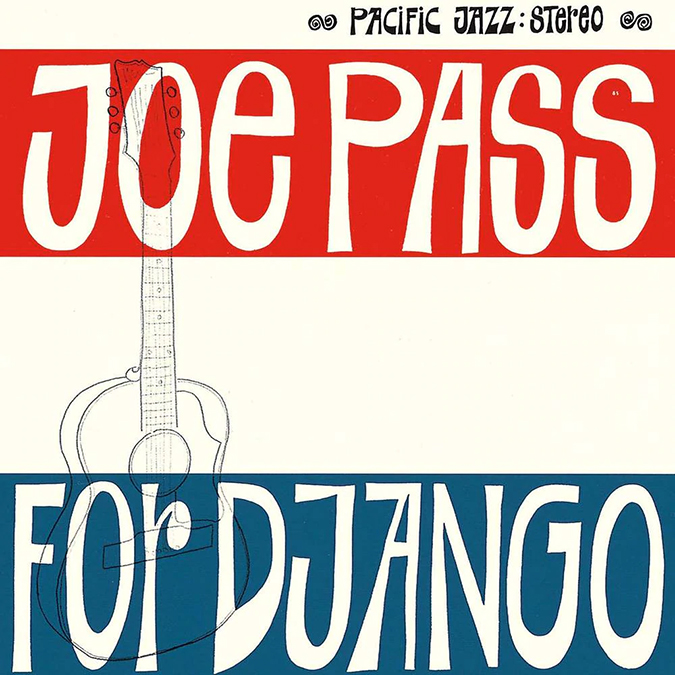 The album opens with “Django,” composer John Lewis’s tribute to the Belgian guitarist. Pass plays a series of chords with Hughart shadowing him on bass. On the 1981 LP, the chords sounded full and the bass had a lot of low-frequency force. On the CD, the guitar chords had more top-end clarity and Hughart’s individual bass notes were better defined; however, while the bass on the 1981 pressing had more force, the notes were soft at the edges. When Pass begins to play the melody, Bailey’s cymbals were brighter and cleaner and his snare drum had a harder snap on the Mosaic CD. Addey’s remaster on the CD also brought out Pisano’s guitar chords a bit more clearly.

When I switched to the Tone Poet pressing, everything on “Django” was presented in even greater relief than on the other two versions. Pass’s notes, especially on long improvisations, carried more complex overtones and were clearly pronounced. The way he uses the guitar pick to create dynamics and pace was easier to follow. The drums were more three-dimensional; Hughart’s bass lines were satisfyingly full in the lower register, while the attack of each note was well presented. Harmonically, Pisano’s chords were more fleshed out, and I could appreciate more fully how he lays down a foundation for Pass’s single-note lines.

Pass recorded impressive interpretations of four Reinhardt compositions on For Django, including “Nuages,” a song he would often return to throughout his playing life. He opens the tune with chord runs and single-note melodic statements of the theme. On the earlier pressing, the chords were full but the low notes on arpeggios registered too strongly. On the CD and the new pressing, the chords were brighter in tone and it was easier to hear how they were constructed, while the low notes were less emphatic. 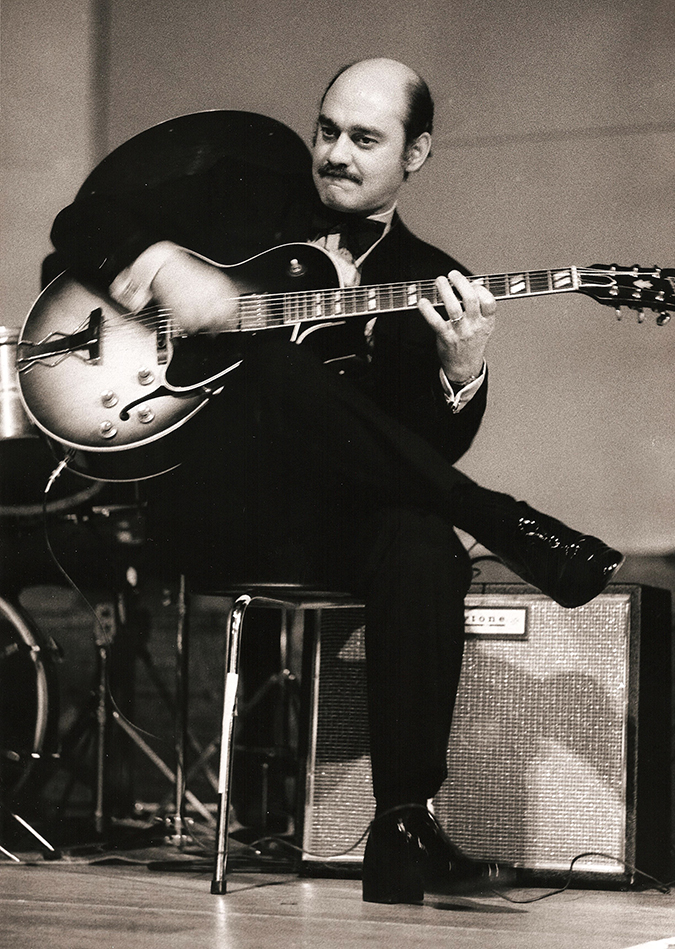 When the rest of the band enters on “Nuages,” everything sounded reserved and distant on the earlier LP. The CD brought more clarity and focus to the instruments; Hughart’s bass gained in attack and drive, Bailey’s drums came out of the murk to help move the song along, and Pisano’s guitar chords had more meat on them. The new pressing goes even further, bringing everything a step closer. Hughart’s bass lines had the clarity of the CD, but low-frequency notes had more impact on the new LP; Bailey’s drums were more forceful and three-dimensional, while Pisano’s chords were more satisfyingly layered.

Several tunes on For Django, including Paul Misraki’s “Insensiblement” and Cole Porter’s “Night and Day,” were frequently played by Reinhardt on his performances and recordings. Pass’s quartet matches the swift pace Reinhardt often chose for the latter song, and stays close to the slower ballad tempo Reinhardt used for “Insensiblement.” In both cases, Pass and the other players evoke Reinhardt’s melodic genius, and they mirror the verve and skill of Reinhardt’s groups, which included his brother Joseph on rhythm guitar. This new pressing let me hear how well the players in Pass’s quartet were tuned in to each other.

“For Django,” which is Pass’s own tribute to Reinhardt, is a strong enough composition to sit next to the other songs on the album and it demonstrates how well the quartet plays as a unit. Pass states the melodic theme, with Pisano’s rich chords filling in behind. On the 1981 pressing, the instruments were crowded together and it was easy to miss the exquisite nature of Pisano’s playing. The soundstage was wider and deeper on the CD and let the bass and drums come out more clearly.

On the Tone Poet pressing, Pisano’s chords on “For Django” sounded even more complex and impressive. I could get a better understanding of his picking technique, his pull-offs, and the chord choices he makes to feed Pass’s solos and keep them flowing. The subtleties of Bailey’s understated drumming and the way he used his cymbals was clear and immediate, and Hughart’s bass lines were firmly stated and resonant. 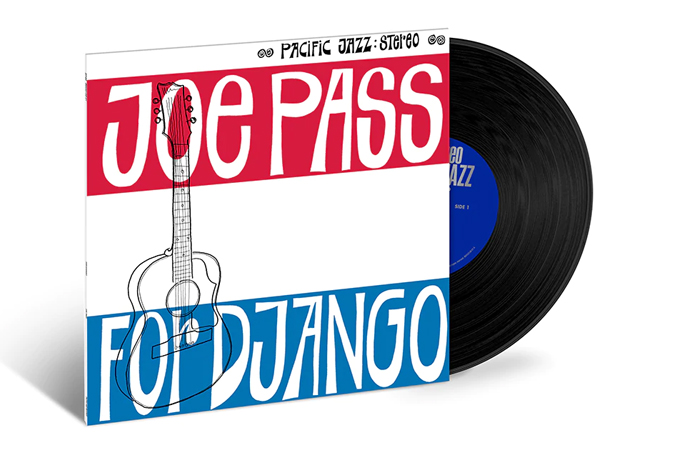 Blue Note’s Tone Poet releases are normally packaged in gatefold covers that feature photos from the album’s recording sessions. The Pacific Jazz releases are in standard single sleeves, but in the same heavy cardboard as the rest of the Tone Poet series. The laminated, tipped-on artwork is of the usual high standard. The color reproduction on this release of For Django is more vivid and eye-catching than on my earlier reissue. An album insert features excellent liner notes by Thomas Conrad, which put the album and Pass’s guitar skills in perspective. The RTI pressing was as quiet and flat as I’ve come to expect from the Camarillo, California, company.

Joe Pass recorded extensively until his death in 1994. His albums are remarkably consistent and rewarding, but For Django is perhaps his most compelling and, to my ears, most personal statement. Malcolm Addey’s mastering of the Mosaic set was very good—well balanced, with a careful and clean presentation of the music. But this Tone Poet pressing of For Django placed me even more convincingly in the studio, where I could hear how well Pass and the members of his quartet worked together to create this great LP.