The Incredible Transparency of the Vivid Audio G1 Spirit Loudspeakers

You may be wondering why I’m once again writing about Vivid Audio’s flagship loudspeaker, the G1 Spirit. That’s a good question. And there’s more than one answer.

The first reason is explored in “How to Design the Best Bass into a Loudspeaker,” a YouTube interview I conducted back in January with Laurence Dickie, Technical Director of Vivid Audio. For a few months prior to launching that video, I’d been searching for the perfect loudspeakers to partner with the magnificent Gryphon Audio Designs Apex Stereo amplifier. I originally reviewed the Spirits in June of 2017 and knew their capabilities—particularly in terms of their bass reproduction. So knowing that Gryphon amplifiers are bass monsters and that the Apex was liable to be the king of subterranean lows, I figured this was a perfect pairing. I settled on the Vivids for the reasons detailed in the video. Essentially, I could not properly assess the Gryphon without a set of speakers equally capable of reproducing extreme power and refinement in the lowest frequencies. As it turns out, I was right. The Apex and the G1 Spirits produced sound that in some ways transcended anything I’d ever heard. The system anchored by these two heavyweights was a smashing success, and the bass was astounding. 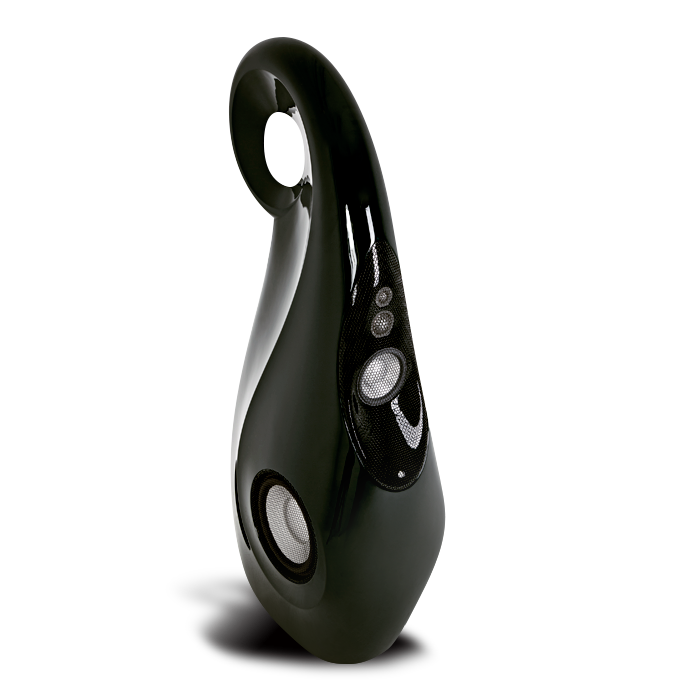 The second insight that made me want to revisit the G1 Spirit proved to be even more profound, but I had to dive deeper into the Apex review to arrive at it. Like I said, I initially chose the Vivids for the Gryphon review because I wanted guaranteed low-end perfection—a necessary testbed for what I correctly assumed would be a tremendous strength of the mighty Danish amp. But what I heard when I started that review drew my focus away from the bass. I feel a bit sheepish about having to admit this, but the overriding reason—the far more relevant reason, in fact—that the Vivids ($86,000 per pair in standard finishes; $92,000/pr. with optional external crossover; all prices in USD) were the perfect speakers for the Gryphon Apex amplifier review came down to something else entirely.

In my review of the Apex, I began the sound section by saying, “When I connected the Vivids, powered up the associated electronics, and hit Play, something amazing happened: I was greeted with a sound so different—and obviously so much better—than what I’d heard just hours earlier that this review practically wrote itself.” 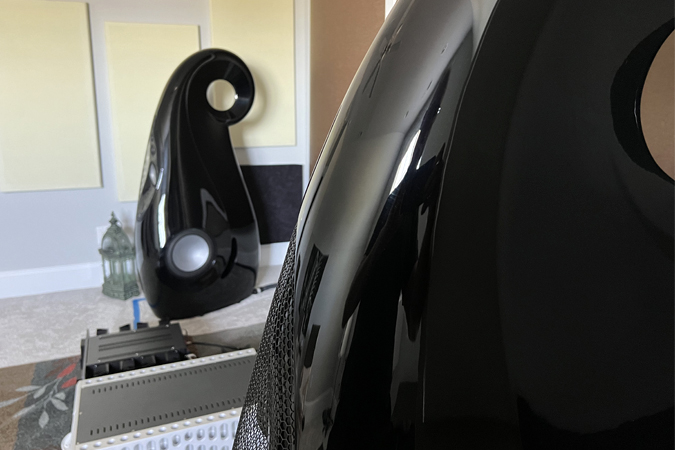 Now clearly, this revelatory experience was a function of the Gryphon amplifier’s outstanding sound characteristics shoving their way to the fore. But was that dramatic sound quality more apparent due to the speakers I was using? I’m now convinced the answer is a resounding yes.

I’ve linked to my original review of the Vivids above, and I also want to provide a link to “The Ultra Jeff Fritz Reference System, Loudspeakers: Vivid Audio Giya G1 Spirit.” In the second article, I explain why the Vivids are now part of my reference audio system. These two links contain all the technical detail you’ll need on the Spirits if you want an in-depth look at the specs, so I won’t rehash that here. What I want to document is more my proof of concept. Are the Vivids as utterly transparent as I first assumed? And how would I know for sure?

After the Gryphon Apex Stereo amplifier review, I swapped my reference power amplifier back into my system. Once the Boulder Amplifiers 2060 was back in, even though the mighty Apex had surpassed it in many ways, I was instantly reminded of why I’ve loved this amplifier so much for so long. It is utterly neutral, has a tomb-like silence, and functions with laser-like precision—combined with immense power reserves. The big Boulder is hard to fault. These qualities are the reasons the Boulder is part of my current reference audio system. 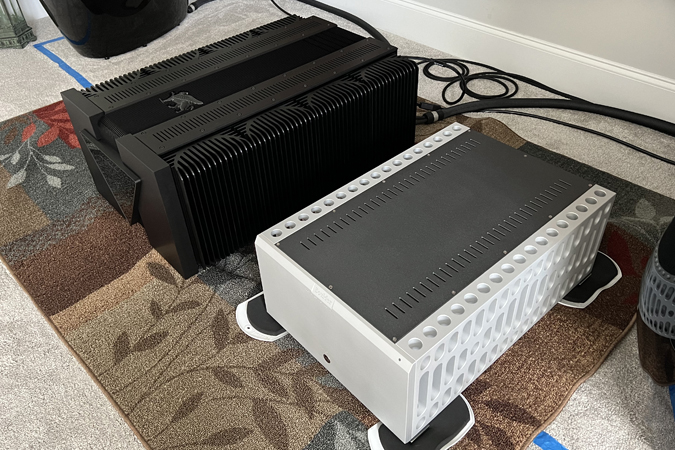 Let’s get back to the G1 Spirits: The Vivids made all the differences between these two amplifiers highly obvious. The Vivids are tonally neutral, free of destructive resonances, articulate from the top of the audioband to the bottom, and so resolving of fine detail that seemingly nothing escapes their Superman-like gaze. I easily heard the differences between the Gryphon Audio Designs Apex, a $100k state-of-the-art amplifier, and the Boulder 2060, a fantastic previous-generation amp from one of the most respected electronics manufacturers in the business that retailed for $44k (when it was available). The question on my mind, though, involved the magnitude of those differences. I’d never heard two amplifiers—or in fact, two electronic components of any type—sound so dramatically different. Was the gulf between the sound characteristics of these two amplifiers that big? Or was the ridiculous level of transparency that the G1 Spirits are capable of more obviously exposing the differences?

Enter a third amplifier. Or amplifiers, as it turned out. 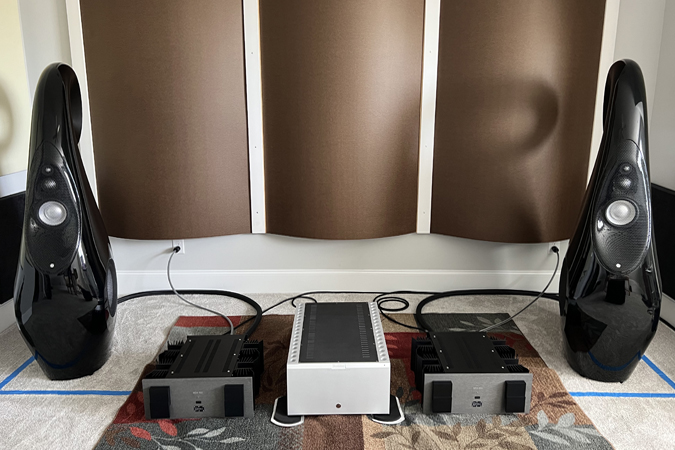 I love old Krell amplifiers. Perhaps because I cut my audiophile teeth largely on these beasts—KASes, KSAs, FPBs—in the early years before I began writing for SoundStage! (and I’ve used them intermittently since). I recently came across a set of amplifiers for sale, and I have to say, the Buy It Now button did get the better of me. I was fully aware this would not be a permanent acquisition—I always sell these impulse purchases eventually—but in this case, the Krells would prove useful.

The amplifiers themselves were a pair of Krell MDA 300 monoblocks (MDA stands for Mono Differential Amplifier), originally manufactured around 1994. The 95-pound MDA 300 outputs a rated 300W into 8 ohms, 600W into 4 ohms, or 1200W into 2 ohms, and is stable into 1 ohm. One reason I bought these—and that I’m confident of their current performance—is that they were professionally restored by a reputable technician before being shipped to me. Cosmetically the amplifiers are beautiful, a great example of that early Krell manliness that’s been largely missing from the company’s product offerings for the last decade or so.

My question was this: Would the Vivid Audio G1 Spirit loudspeakers reveal the differences between the Boulder 2060 stereo amp and the Krell MDA 300 monoblocks that were 20 years its senior? Or would they sound very similar with only minor differences? 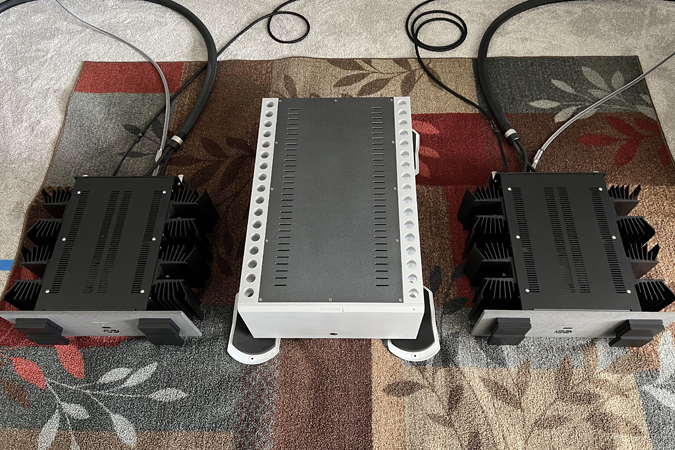 Out went the Boulder, in went the Krells.

Gosh, was this a quick study. Heard through the Vivids, the Krell’s bottom-up nature was instantly revealed. The sound was very slightly dark and rich with tonal color, and I did quickly perceive that there wasn’t as much high-frequency air as I’m used to with the Boulder 2060. But the bass . . . the bass was vise-like. On Adele’s “Go Easy on Me” (30, 24-bit/88.2kHz MQA, Columbia / Tidal), at 47 seconds, the point when the full weight of the piano drops in, the Krells made their presence known. The MDA 300s grabbed hold of the Vivid woofers and seemed ready to launch them across the room. With the Krells in the system, it was as if I could sense their power in addition to hearing it. The sheer weight of the sound made me smile. The old adage about Krell bass being center-of-the-Earth solid is still true today, at least as evidenced by these MDA 300 monoblocks. That is, when heard through the Vivid G1 Spirits. 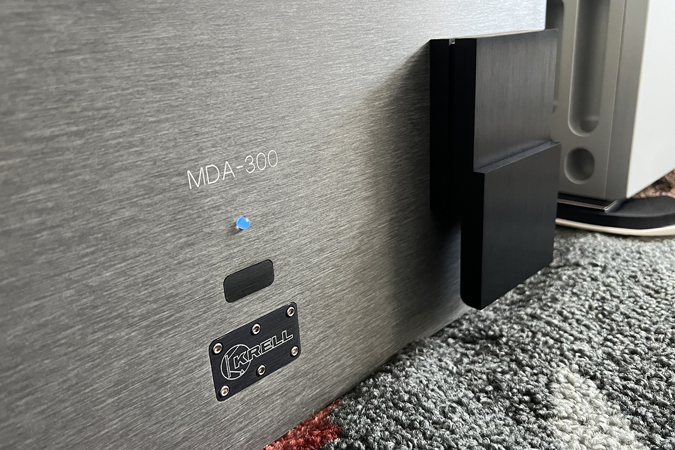 Still, the Boulder is obviously the more neutral amplifier, and it possesses a more tonally balanced sound that’s more modern and sophisticated. The Krells exuded drive, control, and gravitas, and they were eminently enjoyable. And they weren’t just enjoyable in a retro hi-fi kind of way. These amplifiers were actually glorious in their sound quality, and I could easily envision the dark, sweet sound signature that listeners loved when these amplifiers were first released decades ago. But the contrast between them and the more modern Boulder could not be plainer to hear.

I’ll leave you with one more example. The experience of listening to Aznavoorian Duo, featuring cellist Ani Aznavoorian and her sister, pianist Marta Aznavoorian, illustrated exactly how obvious the differences between the Krells and the Boulder were when heard over the Vivids. I listened to Gems from Armenia (16/44.1 FLAC, Cedille Records / Tidal), specifically the “Dsirani dsar” track. The piano had great weight and a densely packed image, but the cello was a touch darker than it had been through the Boulder. This lack of light lent the song a slightly different character. Although eminently enjoyable over either amplifier, the difference was so very easy to hear. I preferred the Boulder sound in this case.

“Easy to hear” is really the point of it all. Mission accomplished. 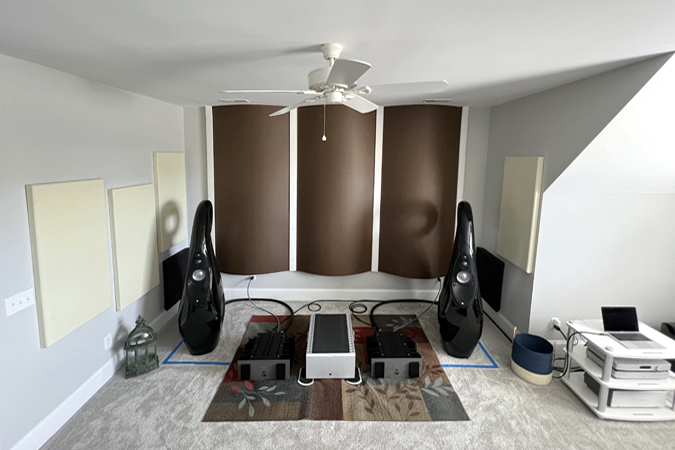 My obvious conclusion is that the Vivid Audio G1 Spirit loudspeakers are capable of simply magnificent transparency. I’m completely convinced. Does this come down to the acoustically slick enclosure design that mitigates any edge diffraction? Is it the driver complement, purpose-engineered and built specifically for these Vivid speakers? Or is it the result of some kind of magic that Laurence Dickie himself has conjured like Harry Potter into his flagship product? I can’t give you the answers to any of those questions (although I know for a fact that Laurence doesn’t look much like Harry). What I can tell you is that Vivid’s G1 Spirit loudspeakers are equipped with a resolving capability that is truly groundbreaking. And gosh, do they ever make dissecting the differences between connected electronics an absolute cinch.

My takeaway on the Vivids is this: The G1 Spirits will allow anyone to hear the true stereophonic beauty of the equipment they’ve so carefully assembled in their listening room. And since that beauty is only displayed when a system is actually playing back music, it’s the music lover who ultimately wins when listening to Vivid’s G1 Spirits.