Two or Three a Month

In my younger, poorer years, I spent an inordinate amount of my free time scouring garage sales and rummaging used-record stores for LPs. In those days, the early 1990s -- God help me, nearly 30 years ago -- used vinyl was plentiful and cheap.

I recall a sale at the Toronto Opera Company, where patrons and donors stocked the Front Street Theater with tons of antiques, props, and -- yes -- vinyl, much of it at absurdly low prices. I walked out of there with about two linear feet of classical and opera LPs, all in mint condition, for about 30 bucks. As I searched the bins and boxes, at some point I stopped bothering to check the discs’ condition or even their titles. I just grabbed handfuls and added them to my pile. At the time, I wasn’t much interested in classical or opera, but I had a feeling I’d want this stuff when I got old.

As for first pressings of good rock, good jazz, and lots of blues, in those days you could actually find good shit at garage sales. Not so much these days, because the word has gotten out: Vinyl is worth money! Now everyone thinks their beat-up copy of Billy Joel’s 52nd Street is worth 20 bucks.

I don’t bother with garage sales any more. And I don’t need to waste time and get aggravated, because these days so much new vinyl is for sale. As Peter Gabriel sang, “Time is money, and money I serve.” These days I just amble over to Pop Music, my local record store in Toronto’s East End, to surf row after row of tasty new LPs. Derek Antonio, the proprietor, used to be a buyer at HMV -- he knows what’s available, and the provenance of each record he carries. Plus, he’ll order for me anything I want, at seriously competitive prices.

When you have lots of hobbies and a finite income, as I do, you’ve got to know your limitations. I keep my vinyl purchases down to a dull roar of two or three new discs a month. I’m comfortable with this for two reasons.

First, I’m no completist. I’m fine buying one album from an artist and leaving it at that. I don’t need to get wrapped around the axle and buy a band’s entire discography.

Second, I already own a metric ton of records, and I haven’t yet taken on the task of winnowing out the ones I know I’ll never listen to again. I feel that my current two thousand or so records are already pushing me into hoarder territory, and that when I kick the bucket, deciding what to do with them will be a Herculean burden on my daughter.

So a diet of two or three LPs a month somewhat simplifies my life. It’s affordable, and keeps down the accumulation of clutter. Nor am I finding it hard to stick to that diet. Three trips a month to Pop Music works just fine (though recently I splurged big, courtesy a juicy gift certificate from my brother-in-law in thanks for my having stored his motorcycle last year).

Still, it sucks when you bring home a clunker. I recently had Antonio order me two King Crimson albums on vinyl, recent remasterings from Panegyric Records of Beat and Three of a Perfect Pair, to complete my collection of 1980s Crimson. This is my favorite period of Crimson’s work, given that my first exposure to the band was a concert at Toronto’s Masonic Temple, during their tour in support of their album Discipline (1981) -- an event for which I’d filled my head with LSD. 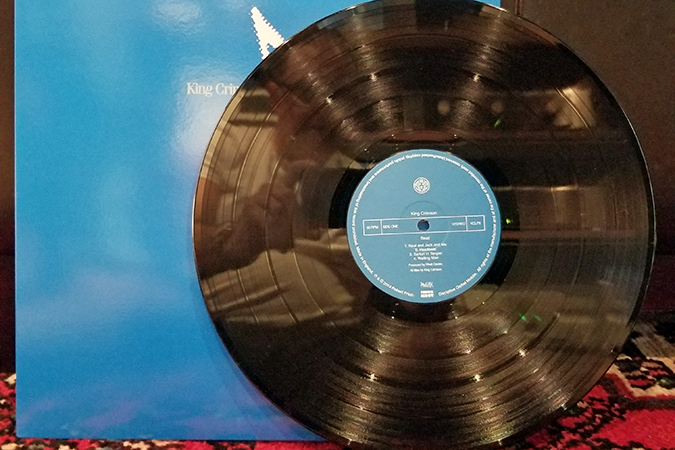 The first I ordered was Beat (Discipline Global Mobile/Panegyric KCLP9). I picked it up, then raced home with it like a little boy on a new bike. This album still excites me -- its combination of fantastic musicianship, exotic rhythms, and intricate instrumental interplay still encourages repeated listens. And this new vinyl edition was claimed to have been made from the highest-quality master sources “approved by Robert Fripp,” founder of the band, and pressed on a 200gm biscuit of vinyl. Could it get any better? Well, turns out it couldn’t really get much better than the wafer-thin copy I’d bought when Beat was first released, in 1982. And when I weighed the new pressing, it came to 192gm. A rip-off.

I’d hoped for an increase in dimensionality, more depth in the instruments, and tighter, deeper bass -- all the stuff you want and often get from a well-crafted reissue. I didn’t get any of that. Comparing, I’d guess that the master tape, or file, or whatever (it’s not clear what Fripp used as a master), is just . . . OK. Beat is a no-nonsense recording, I suppose. The music is all there, and it’s magnificent, but the sound quality? Not much magic.

Still, I’m reasonably happy to have this reissue, as there’s no other music like this. Adrian Belew has an endearing voice, Bill Bruford is still my favorite drummer, and Tony Levin’s Chapman Stick bass sounds like no other instrument. Add in Robert Fripp’s searing guitar work, and this album is a winner.

But I hadn’t learned my lesson, and plunked down on Pop Music’s counter another $37 Canadian on Three of a Perfect Pair (Discipline Global Mobile/Panegyric KCLP10). Again, fantastic music, but only decent, not great, sound quality that’s on a par with that of my original 1984 pressing. I’m batting around the idea of buying Discipline, just so I have all three Panegyric remasterings -- but I’m not a completist, remember? 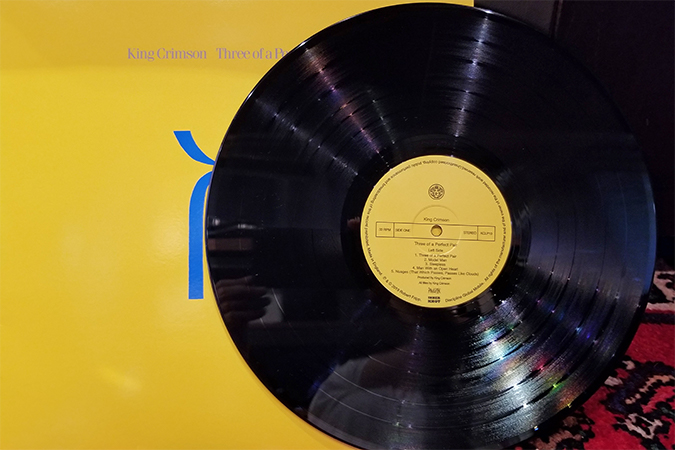 This September, I’m off to see the latest incarnation of King Crimson when they play Toronto. It’s mid-August as I write this, so now’s the perfect time to reignite my love for this fickle, complicated band. This time, though, I think I’ll skip the LSD.

The Tone Poet appellation applied to a recent series of reissues from Blue Note Records sounds a touch precious to me. But when I take into account the accomplishments of Joe Harley, the man responsible for the series and its title, I conclude that he can call himself whatever he likes, and that the proper response from me is respectful applause.

The Tone Poet series comprises reissues of lesser-known Blue Note titles, all supervised by Joe Harley, mastered by Kevin Gray, and pressed at RTI. The results look and feel like cost-no-object projects. The thick, glossy jackets are produced by Stoughton Printing Company, based in the City of Industry, California. The reproduction of the artwork and photos is vivid and crisp, and the discs themselves are flat and quiet. After buying three Tone Poet releases, I’m sorely tempted to violate my maintenance dosage of three LPs a month. 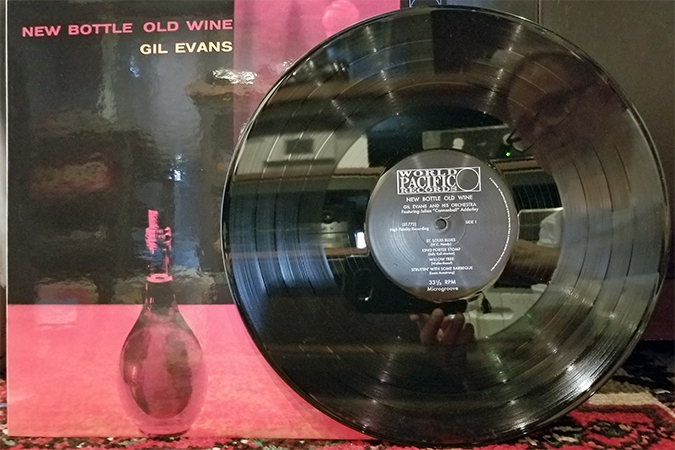 The best of what I’ve got so far is New Bottle Old Wine: The Great Jazz Composers Interpreted by Gil Evans and His Orchestra (World Pacific WP-1346). The album was originally released in 1958 by World Pacific Records, a label then acquired by Liberty Records, then EMI, and eventually by Blue Note, which gained control of its catalog in the 1990s. This session is classic Evans: arrangements of tunes by W.C. Handy, Jelly Roll Morton, Fats Waller, Lester Young, Lil Armstrong, Thelonious Monk, Dizzy Gillespie, and Charlie Parker, each in a rich, relaxed, West Coast jazz arrangement by Evans, and performed with restraint by an immensely powerful big band of 14 players. Front and center is Cannonball Adderley, and in this session his alto saxophone has a crisp bite seldom heard in his other recordings. It sounds as if Adderley is working harder than usual, blasting away to keep from being flattened by the horns hammering along just behind him. But Adderley retains his silky, rhythmically lithe style, blending in well with Evans’s arrangements.

In ways similar to some of Duke Ellington’s more restrained recordings of the late 1950s, in the best parts of New Bottle Old Wine Evans highlights the spaces between the notes, using the power of the horns to punctuate the acoustic of the recording venue. For the most part it’s a sparsely populated recording, and that gives this LP its power and grace. I’ve played this disc repeatedly since buying it, and it’s got staying power.

I said “sparse,” but in a few tracks Evans has the whole band let it all hang out. Morton’s “King Porter Stomp” is late-’50s big-band heavy metal, and everyone gets in on the action. But the next track, Waller’s “Willow Tree,” puts us back in Evans’s trademark minor-key introspection. Here, the hall sounds huge. The album, taped in New York City, sounds as if recorded in a large, reverberant studio. This very “wet” recording just drips ambience.

While I already own a late-’90s pressing of Wayne Shorter’s Et Cetera, recorded in 1965 but not released until 1980, I decided to splurge on the new Tone Poet reissue. I’m not sure why -- I don’t listen to this album very often, as I find it difficult to relax into. Still, this is an important album, I thought. I need to like and understand it. Maybe this reissue will help me do that.

The Tone Poet reissue of Et Cetera at least looks like a million bucks. Unlike New Bottle Old Wine, the Shorter album has a gatefold jacket, and it’s here that Stoughton Printing struts its stuff. That cover is so thick it just barely fits into a standard outer poly liner. The black-and-white photos by Francis Wolff are reproduced with intense contrast -- they look as if shot yesterday. As I listened and worked to understand what’s going on in this music, I held and fondled the album jacket -- something I rarely do. 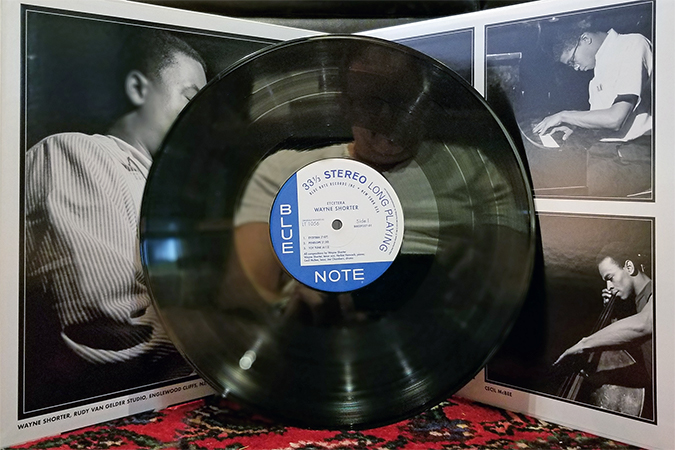 For the most part, Et Cetera is a session of busy, jangling, angular music, with a few more lyrical tracks that tie it all together. The album’s Ornette Coleman-like edge makes it a bit of a challenge, but now, $35 Canadian later, I felt I was beginning to understand what it’s all about.

I found it helpful to first focus on the sound quality. Again, this is a juicy, sexy disc. For this session, tenor saxophonist Shorter assembled a serious band of all-stars: the front of my room was filled with the piano of Herbie Hancock, the double bass of Cecil McBee, and the drums of Joe Chambers, whose kit appeared in my room life-size, at center right. His ride cymbal was crisp and well defined, with a silky overtone -- a nearly perfect sound, in my books. Hancock’s piano, at center left, had a fleshed-out quality that pianos in vintage jazz recordings often lack.

Now that I was committed, I began to hear where Shorter’s groove was taking him. And by side 2 and Gil Evans’s “Barracudas (General Assembly)” -- the only tune not written by Shorter -- I was sold. I began to realize that much of my initial disconnect with this music had been caused by the apparent lack of interplay of the four instruments -- each musician seems to go his own way, track his own course, lay down his own groove. I couldn’t hear that the musicians’ individual contributions were cohering as collaboratively created music. But once I’d let go of that expectation, Et Cetera became a pastel of musical brilliance that had its own lyrical charms, and an album I could at last enjoy on its own terms.

There are a lot more releases in Blue Note and Joe Harley’s Tone Poet series, and while I won’t collect them all, I’m sure I’ll cherry-pick a few more. But no more than two or three a month. Honest.