When a SoundStage! reviewer asks editor-in-chief Jeff Fritz if he has anything interesting he’d like reviewed, that reviewer never knows what Jeff will say. Jeff said that there was an opportunity to review La Voce S2, a digital-to-analog converter from Aqua - Acoustic Quality (AAQ). I’d never heard of Aqua - Acoustic Quality, and didn’t know if I’d enjoy or regret reviewing their new DAC. But I thought it might be an interesting adventure.

Soon, I was in contact with Mark Sossa of Well Pleased Audio Vida, in Alexandria, Virginia, distributor of AAQ products for North America. I found him accommodating, knowledgeable about AAQ’s products, and quick to respond to my questions. AAQ makes two DACs: La Scala ($5600 USD) and La Voce S2 ($2700 in basic configuration). It was decided that I would review La Voce S2; four weeks later, a review sample arrived.

Aqua - Acoustic Quality is based in Milan, Italy, and it’s there that La Voce, La Scala, and a CD transport, La Diva, are built. La Voce (in English, The Voice) arrived well packed in a plain carton -- no need to spend money on a fancy box when you do as good a job of packing as AAQ does.

La Voce itself measures 17.5”W x 3.9”H x 12.1”D and weighs 15.4 pounds. Its looks are attractive if unspectacular, even plain: clean, simple lines, a solid feel, and assembled to close tolerances. The review sample’s faceplate had a black-satin finish, its case a powder coating of gray Nextel. Mark Sossa pointed out that Nextel is used to reduce resonances, and is one of many important design touches built into La Voce S2 that may not be apparent at first glance. The faceplate is also available in a silver satin finish. 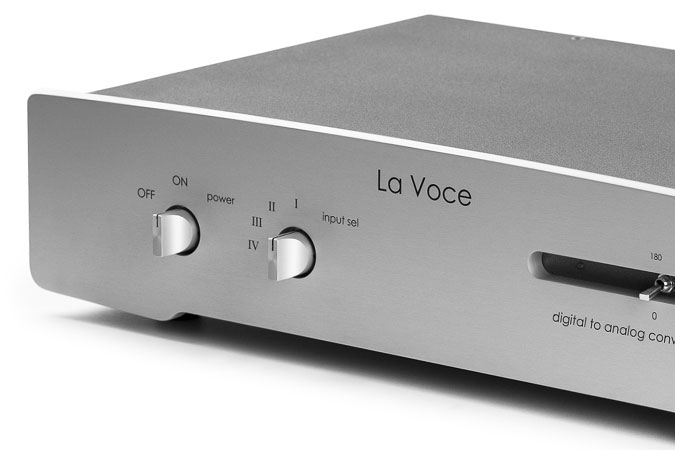 The front panel has just three switches: Power On/Off, a four-position Input Selector, and a digital phase selector (0°/180°). There’s no light show, other than a small LED that glows green when La Voce is powered up. On the rear panel are the requisite IEC inlet for the power cord; digital inputs terminated with RCA (S/PDIF), USB, and XLR (AES/EBU) connectors, as well as an AQLink (I2S serial bus) input. My sample had single-ended preamp outputs, but other choices of inputs and outputs are available. I recommend visiting AAQ’s website to see which suit your needs.

Perhaps La Voce S2’s defining design characteristic is that it gives the user a choice of DAC chips. The standard Burr-Brown PCM1704-K chip (my review sample), or the optional Philips TDA1541A or Analog Devices AD1865 chip, is mounted in a DIP socket. This is a modular design that makes it possible for the customer to easily remove and replace DAC boards. The Burr-Brown chip in my review sample is described by AAQ as a “sign magnitude R2R ladder DAC.” 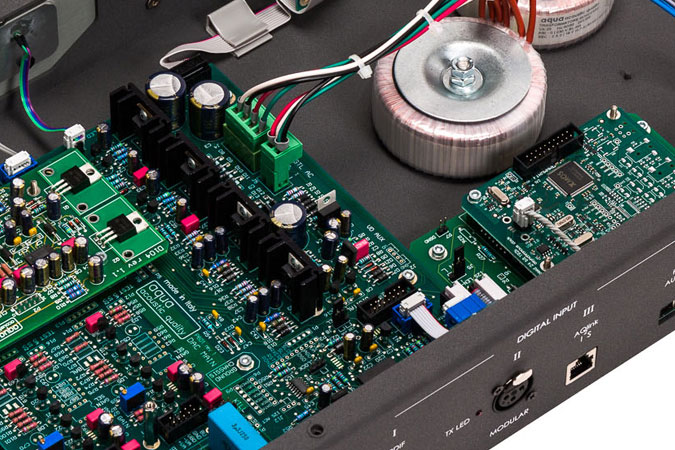 La Voce’s lack of digital filtering is fairly rare for one of today’s DACs. According to AAQ, “digital decoding is done by our exclusive DFD circuit (direct from decoder) without any digital alteration (upsampling, oversampling, digital filters, etc.).” La Voce’s galvanically isolated, asynchronous USB and RCA, XLR, and I2S inputs can accept resolutions up to 24-bit/192kHz. DSD is not supported. The fully discrete analog output stage has MOSFET and JFET power-supply regulators, and no overall negative feedback is used.

What I was able to see of La Voce’s innards included two small transformers and a good-size circuit board chock-full of parts -- it all looked well put together. Customers won’t feel cheated by the amount of effort on display inside the case -- La Voce S2 has the goods under the hood, where it counts. 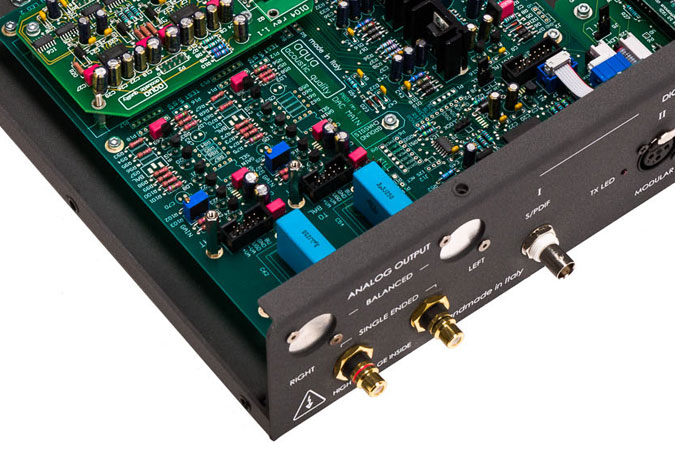 If you have a server-based front end that runs on Windows, the first thing you’ll need to do after installing La Voce S2 in your system -- and before you plug in the USB cable -- is to download the USB ASIO driver. My DAC is an Abbingdon Music Research DP-777, so I’m familiar with this step. (Those running OS X or Linux won’t need to install a driver.) Several good pointers about how to do this are included in the owner’s manual, which you can download from AAQ’s website. The company offers plenty of good advice, and seems to do a pretty good job of looking out for their customers.

I was also in contact with Stefano Jelo, AAQ’s sales manager. I asked him about the company’s design philosophy for their DACs:

First of all, we focus on one important thing: we build products to last and to avoid obsolescence. That is the reason for the modular architecture, allowing the customer to update the product when upgrades are available. Cristian Anelli, Chief Designer of R&D, is very sensitive to it.

For us, it is vital to let people know that the acoustic quality and the sonic performance are the natural consequence of the way a product is designed and made. We want it to be built entirely in Italy, from the case to the package. It is not only a matter of nationalistic pride, but a matter of quality manufacture, that we personally control step by step.

Also, nowadays a DAC is usually considered to be linked to a computer for the hi-res files, nevertheless we keep on believing that the CD is in good health, and the sound quality is not only a sample-rate problem. A DAC is a highly refined piece of gear and it needs a good source to work in the proper way, be it the CD transport or the computer files. A bad CD will always sound bad as well as a bad hi-res file.

Our goal is to let the music play with a sense of immediacy that the live experience is able to transfer. From here starts the research for a DAC without digital filtering, in order to convey the sound directly from the decoder. I am sure that this is what makes the difference with our DACs.

I set an old CD player to provide La Voce S2 with signal 24/7, and let the AAQ marinate in my system for a week. I was then ready to sit down and do some serious listening.

I wasn’t prepared for just how good La Voce S2 sounded when I first listened to it in my system. I found myself completely immersed in the music. My first thought was, How much did they say this thing costs? I hadn’t thought that a $2700 DAC could sound as good as what I was hearing. 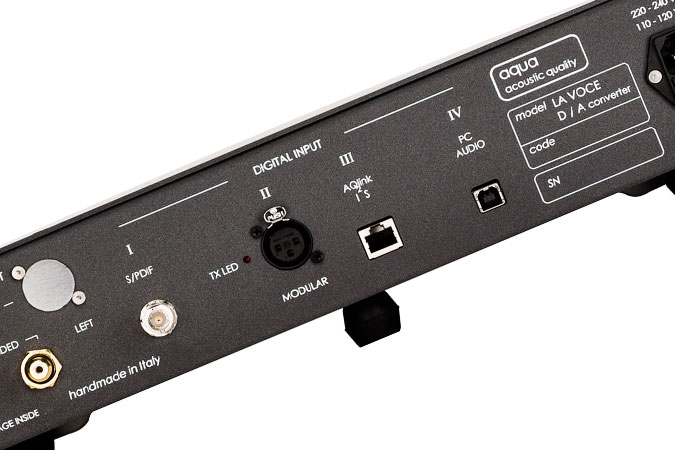 Overall, La Voce S2’s sound was transparent, with an uncommon clarity and openness that perfectly served whatever music I played. Such descriptors as warm or cold or detailed didn’t really apply -- the sound was that . . . organic. La Voce did, however, do a good job of pressing the usual audiophile buttons. Images seemed solid and “palpable,” and appeared on a wide, deep stage. The bass was deep, ample, and tight, with appropriate amounts of rumble when the recording contained that. The highs were airy, the midrange clear. In addition to its overall sonic realism, one characteristic of La Voce’s sound that really caught my attention was its ability to reproduce a wide dynamic range. Percussion had realistic impact and sounded resonant. Orchestral brass going full-tilt easily filled my room, but never sounded piercing or harsh -- I was easily able to perceive the character of the instruments being played.

La Voce is well named -- it did an impressive job of reproducing voices. Nnenna Freelon is fast becoming one of my favorite singers. She has a voice strong enough to really belt out a tune, but sings with such passion that she also speaks to a listener’s spiritual side. One of my favorite albums of hers is Live (CD, Concord Jazz CCD2184-2). In “If I Only Had a Brain” and “My Cherie Amour” she’s obviously having fun, interacting with the audience -- but the real treat here is her rendition of Smokey Robinson’s “The Tears of a Clown.” She begins slowly and reflectively, but after the second chorus she begins to build intensity and feeling. La Voce S2 did a superlative job of contrasting the slower, more contemplative section of this track with its powerful conclusion. By that point, I felt as if I’d been transported from my listening room to the Kennedy Center on the night this was recorded. 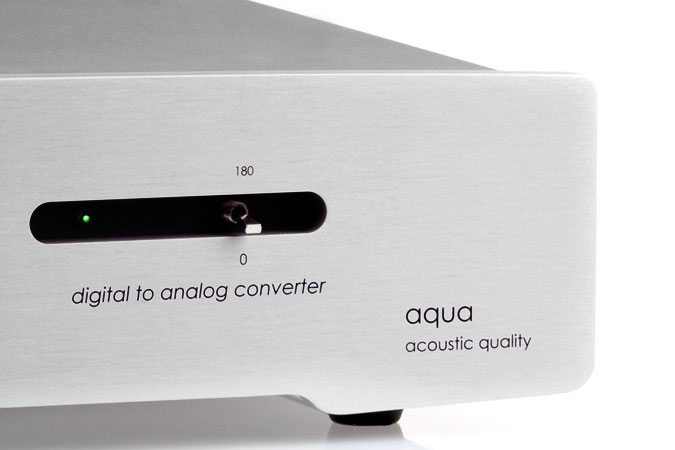 I’ve long felt that the acoustic piano, whether played solo or as part of a chamber ensemble or orchestra, is one of the hardest instruments to accurately capture in a recording. This is mainly because, to make the recording sound believable, you must get the tonality, among other things, just right. To assess an audio component’s reproduction of piano sound, I use Vol.2 of Paul Crossley’s recordings of Debussy’s complete works for solo piano (CD, Sony Classical 53111). Crossley’s technique is outstanding, and La Voce S2 made listening to this disc far more interesting than I’ve found it through several other DACs. Transient impacts were a cut above what I’m used to.

Orchestral works played through La Voce S2 also sounded superlative. I very much enjoyed listening to one of my favorite tracks: Malcolm Arnold leading the London Philharmonic in his own A Sussex Overture (CD, Reference RR-48). The strings conveyed a feeling of flying, and the percussion added to the sense of wonderment. La Voce did an excellent job of capturing the full breadth and scope of the orchestra’s sound, from the high frequencies that seemingly reached to the sky, to the low bass, which was strong and communicative.

I thought a lot about where Aqua - Acoustic Quality’s La Voce S2 might rank among its competition. Two DACs I’ve listened to recently have been very nice: M2Tech’s Young DSD ($1699), and Hegel Music Systems’ excellent HD20 ($2000, discontinued). I rate La Voce S2 ahead of the Hegel and just slightly leading the M2Tech, partially because of its flexibility. Although, at $2600, La Voce S2 costs not much more than the M2Tech or Hegel, in terms of musicality and refinement its sound quality was higher than both.

I found it more interesting to compare AAQ’s La Voce S2 with my Abbingdon Music Research DP-777 ($4995). Listening to the AAQ, at no point did I long to return to the AMR -- musically, La Voce S2 satisfied. But when I did eventually reinstall the DP-777, I felt it sounded slightly better, albeit at almost twice the price. It would be fairer to compare the DP-777 with AAQ’s La Scala ($5600). Around this time, while attending the Chicago AXPONA show at the end of April 2015, I invited a bunch of the fellas over to do some listening. A couple of them remarked that they’d never heard my system sound better. One said that he felt that, with the increased levels of detail and tunefulness he was hearing, he was listening to his own music for the first time. These comments were made before we reinstalled the AMR.

The understated exterior of Aqua - Acoustic Quality’s La Voce S2 belies the technical accomplishments within -- it has a lot to offer for its price, especially in terms of musical enjoyment. I’d say that the design targets presented above by Stefano Jelo have been met. La Voce S2 is obviously well made, and once it was set up, I experienced no problems in its operation. Just set it in place and enjoy your music. And it plays “Red Book” CDs as well as it does 24/192 files.

In my experience, you’d easily need to spend at least $4000 or even $5000 to surpass the level of performance La Voce S2 achieves for $2700. In my book, that makes it great value for the money. With its solid build quality, full feature set, modular design with easy field support -- and, most important, high sound quality -- the Aqua - Acoustic Quality La Voce S2 DAC is easily and highly recommended.